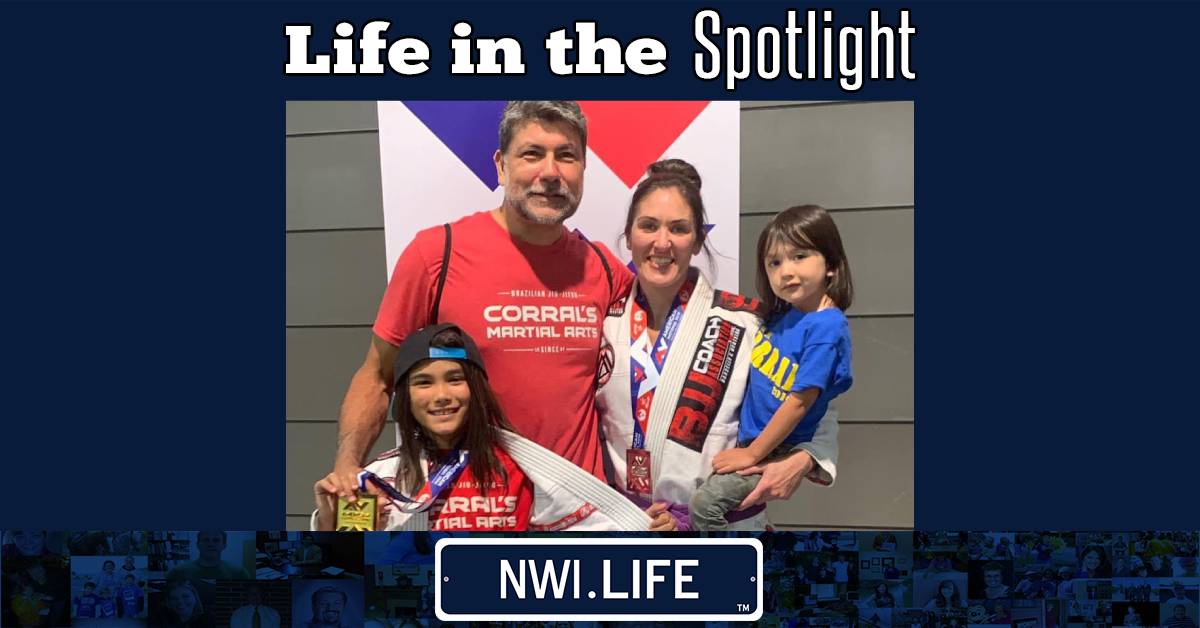 In Northwest Indiana, Corral’s Martial Arts empowers adults and children through the art of Brazilian Jiu-Jitsu, Taekwondo, self defense, and more. At the helm of the classes are high-ranking, champion instructors certified by the International Brazilian Jiu-Jitsu Federation (IBJJF) in Rio de Janeiro, Brazil. Among the team coaches are Brianne Corral, a Tae Kwon Do black belt and Brazilian Jiu-Jitsu brown belt who spearheads the Corral’s Martial Arts gyms with her husband Braulio. Through her own martial arts journey, Corral has tested her strength in remarkable ways and claimed victory for an IBJJF World Championship Master Title in 2019.

Corral shared her story with us, from its youthful beginnings to its masterful, thriving present.

She began her martial arts training when she was in middle school in Lake Geneva, WI, where she grew up.

“I started training Tae Kwon Do with my siblings –my older sister and my two younger brothers. Brazilian Jiu-Jitsu wasn’t a known sport in the U.S. at that time,” she said. “Martial Arts always interested me. I wanted to learn how to fight and to be able to protect myself if needed. Sparring and competing were always my favorite things. I’m a pretty competitive person.”

From the very beginning, Corral felt a connection to the practice.

“The thing I like about martial arts is that it’s just you, one on one against your opponent,” she said. “No excuses—you have to fight for yourself. No teammates to put the blame on, just you. It’s scary but very empowering, humbling, and rewarding.”

To earn that sense of empowerment, Corral learned she needed to train hard, and constantly.

“The most challenging part of training is showing up when you're tired and you just don’t feel like it. But then, I think of my opponents and I tell myself, ‘they are training today, they are putting in the work. You want to win, so show up and give it all you got, even if today isn’t your best day,’” Corral said.

When Corral dove into learning Brazilian Jiu-Jitsu, she had no idea how her life would change. She had just finished college with a bachelor’s degree from Columbia College in Chicago. She worked as a bartender and a freelance photographer’s assistant, with aspirations to eventually open her own photography studio.

“I was wanting to get back into martial arts or do boxing or something, but didn’t really have the time or the money do so,” she said.

“I soon learned we had a lot in common including a love for martial arts,” she said. “He had been running Club Jiu-Jitsu out of different gyms and promoting MMA fights since 1997. He was already a black belt in Tae Kwon Do and began training Brazilian Jiu-Jitsu around 1993. He was just opening his very own Brazilian Jiu-Jitsu academy when I met him.”

Corral made her first trip to Indiana in 2004, meeting Braulio in Schererville where he planned to open his academy.

“The academy wasn’t even open yet, and I helped paint the walls along with some of his students and MMA fighters from the club he ran,” she said. “I didn’t even really know what Brazilian Jiu-Jitsu was yet, and it was about to change my life.”

Since she was a brown belt in Tae Kwon Do, Corral began assisting Braulio during children’s Tae Kwon Do classes. She also began training in Brazilian Jiu-Jitsu. Then, she started a female self-defense cardio kickboxing class and, in her words, never looked back. Though she did end up opening a photography studio, Corral’s Martial Arts has since grown so much that she eventually didn’t have time or space to run the studio. Now, Corral’s Martial Arts main academy is in Schererville, while a sister academy in Portage.

“Braulio was going to promote me to a blue belt in Jiu-Jitsu but I said ‘wait, I want to compete as a white belt one more time before I get promoted.’ Then, we found out I was pregnant. I was still working as an assistant instructor as much as possible, but as far as my training went, it took me a while to get back on the mat and conditioning myself again because I was taking care of the little one,” Corral said.

About three years later, Corral began training Jiu-Jitsu again. Though she felt like she was starting over, she was promoted to blue belt about a year later and started competing again.

“I just felt one step behind in my training, but I persisted and kept competing. I almost always placed, but I never took a gold medal as a blue belt. I was super proud to be placing, and I still felt like I was a winner, but knew I could do better,” she said.

Corral was promoted to purple belt in November of 2015; she became pregnant with her second son, Bronsen, who was born in July 2016.

“I pushed myself to start training sooner after this pregnancy because I didn’t want to fall too far behind in my training. I trained for about a year before I entered in my first competition, the IBJJ Chicago Open. I was super nervous to compete for my first time as a purple belt, but I trained hard and was more ready than ever,” Corral said.

“It felt so good to finally step on that number 1 spot on the podium,” she said.

Corral had a lot of success that year and the following year, she decided to compete at the World Master tournament. After winning the IBJJF New York open, the IBJJF Chicago Open, and placing third at IBJJF American Nationals in Las Vegas, she felt confident that she would place at the World tournament later that year back in Las Vegas. Unfortunately, she lost her first match, putting her out of the tournament.

“Coming home without a medal was devastating, but I was determined to pick up the pieces and not let myself be defeated. It just motivated me to work harder and learn from my mistakes so I wouldn’t make those same mistakes again,” she said.

“Being an IBJJF World Master champion is still unreal to me,” she said. “When I started out as a Brazilian Jiu Jitsu white belt in 2004, I never imagined I would be at the level to compete at the world tournament, let alone win my division. So I can’t even put into words what it means to me.”

“It means all my hard work and training has paid off,” she said. “It means I’ve represented Corral’s Martial arts in the biggest competition with competitors from all over the world, and proved that our Jiu-Jitsu training curriculum works at the highest level. It means that since I was a kid I wanted to learn how to fight and protect myself and I have accomplished a life-long goal.”

But it doesn’t end there, Corral said.

“I won as a purple belt and received my brown belt on the podium from my husband, Braulio Corral, and his instructor from Brazil, Marcello C. Monteiro, who were both in my corner coaching me that day. Now, I have to back it up and win again as a brown belt,” she said. “No pressure!”

Corral was recently in training camp, just one week out from her first competition as a brown belt at the IBJJF Pan American tournament to be held in Irvine California, when the tournament got canceled due to COVID-19.

“During competition season, I try to compete once a month when possible, then, I have the winter off. I still train, but definitely take some days off and allow for more cheat days with my diet. This is the time for some rest and recovery to give my body a break, so I can come back stronger during the next competition season,” she said.

This is where Corral’s devotion to training and resilience comes most in handy.

“There is a lot of self-motivation that goes on, especially during my competition training camp. This is when you show up, no excuses, and push yourself when you think and feel like you’re done to go just one more round,” Corral said. “I am proud to say that I will be turning 40 on June 13 of this year, and I’m in the best shape of my life due to my martial arts journey.”

Especially during competition time, Corral adheres to a clean diet, a rigorous workout schedule, and Jiu-Jitsu training 4-5 days a week, all on top of teaching classes at the academy and navigating her own family’s hectic schedules.

Corral, her husband, and their two sons live on a five-acre hobby farm in Cedar Lake. They have five dogs, three cats, two goats, a horse, a pony, four peacocks, and about 20 chickens for fresh eggs. They are also beekeepers and grow fresh vegetables in the summer.

“We stay pretty busy working around the house, maintaining the yard and the animals. There is never a dull moment and always work to be done,” Corral said.

Outside of martial arts, Corral has also run five tough mudder 12-mile obstacle runs, was the Bikini America Midwest Champion in 2013, and was 4th runner up at Miss Bikini Universe in Miami in 2013 and 2017. But her focus still lies in martial arts, a passion she and her husband share and have extended to their own sons and many other pupils.

Students of any age can learn a lot from training in martial arts.

“The most important thing for kids and adults to learn in martial arts is to be humble and respectful. You will win some and lose some. Learning how to carry yourself, win or lose, is the most important life skill to have.”

“Win or lose,” she continued, “you find ways to become better, and your actions speak volumes about yourself and your future success. How you treat others in moments of glory or defeat shows how well you can and will handle life decisions, and how you work under pressure. These moments will help you to learn how to succeed in competition as well as in life.”

And, win or lose, you have to work hard to get the chance to do either.

“In martial arts, it’s up to you to decide how hard you're going to work. You are given the tools to succeed, but you need to take those tools and learn how to use them properly in order to become successful. In life, in school, when you're taking a test, applying for a job, getting a promotion, winning a competition, or testing for a belt promotion, it’s up to you to challenge yourself.”

“No one can do it for you. It’s you against you,” Corral said. “It’s up to you to show up, put in the work, level up, and fight for what you want!”