The City of Hobart is currently in the middle of constructing the third and final phase of the 61st Avenue Expansion Project, which spans approximately 1.5 miles from Arizona Street to State Road 51. The 61st Avenue project was initiated years ago with the design and construction of Phase 1 from Marcella to Colorado Street, continued with Phase 2 from Colorado to Arizona Street, all completed to provide an improved transportation corridor from Interstate 65 to S.R. 51, one of the City’s major arterial roadways.

“This is a project that’s being undertaken with federal dollars that we received from NIRPC (Northwestern Indiana Regional Planning Commission),” said Denarie Kane, City of Hobart Director of Development and Staff Adviser of the Redevelopment Commission. “It’s been many years in the making. In general, this is one of the more complicated capital improvement projects that the city of Hobart has undertaken in terms of what we had to do to get to where we are.”

“When we undertook a lot of the planning associated with this project we created a 61st Avenue Joint Governing Commission which was made up of two members of the Board of Works and three members of our Redevelopment Commission,” Kane said. “We thought it was important that both bodies were intimately involved in the planning for the project because the local matched portion of this project was financed through a series of TIF funds. From the beginning, the City of Hobart was very cognizant of the fact that there needed to be good coordination with the bodies that have jurisdiction over the right-of-way as well as the financing.”

The city received over $9 million in federal funds over the course of several years, which is one of the highest monetary awards given to a project by NIRPC. The total cost of the project is estimated to be around $12.5 million. 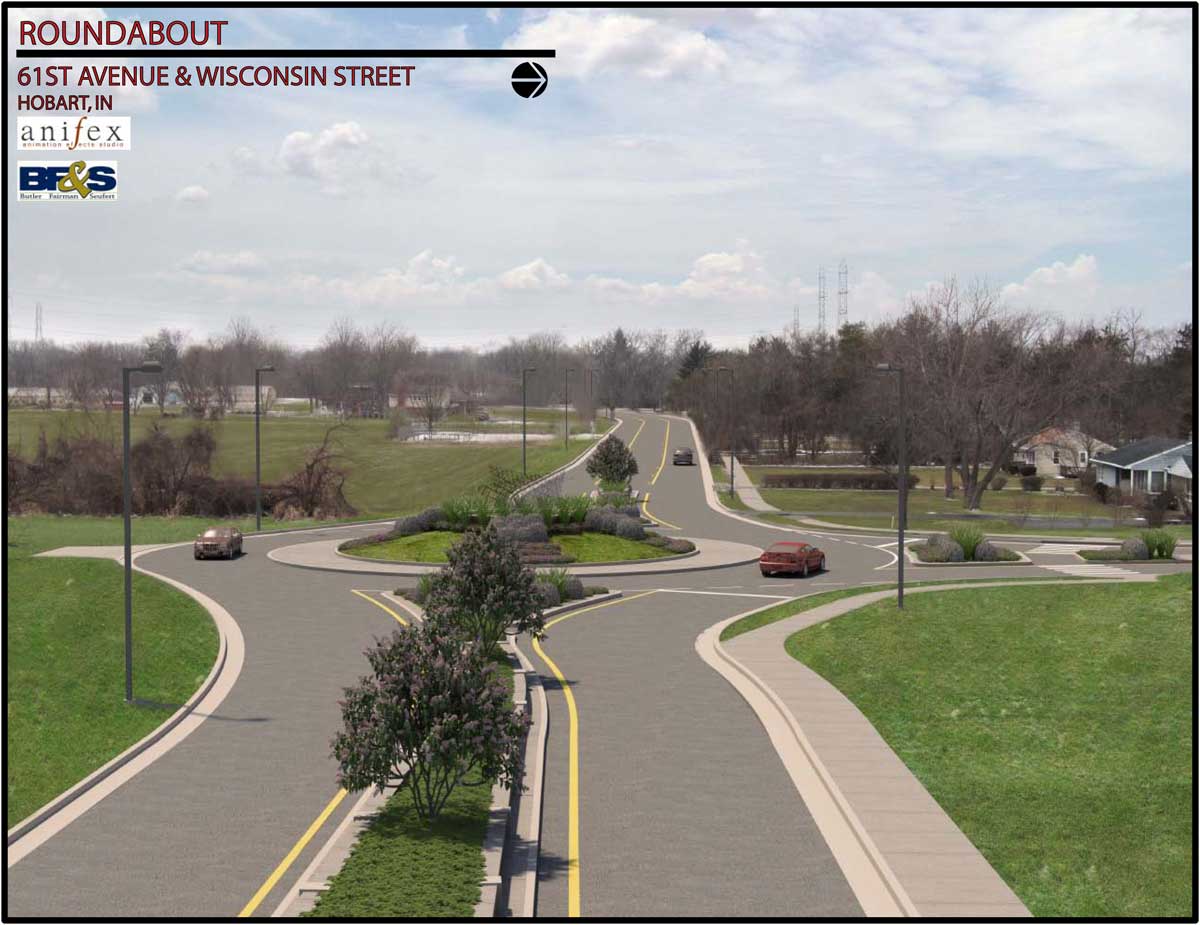 The current Phase 3 is picking up where Phase 2 left off, which is just past Arizona Street heading east on 61st Avenue. The road will be widened and constructed as a three lane cross section with a center turning lane. Lake County, who is responsible for improving the bridge which carries the roadway over Deep River, partnered with and matched the City of Hobart in making the improvements. Moving east and approaching the residential part of 61st Avenue there will be the creation of landscaped medians that will lead to a landscaped roundabout at the intersection of 61st and Wisconsin St, and the continuation of the landscaped medians in front of St. Mary Medical Center.

“In the community, we view 61st Avenue as kind of our direct connection to I-65 and also the gateway into our community as well as to the medical/office part of our community,” Kane said. “That’s why we’ve taken a lot of care in the design of this to create a nice ‘front door’ to that community by incorporating some things that we might not have typically incorporated into a normal road project.”

“Mayor Snedecor has been a visionary for his work on the project,” Kane continued. “It’s definitely an entry corridor into the community so we put a lot of emphasis on making it look good as well as moving traffic efficiently and addressing utility needs in the area. A portion will have upgraded lighting that is a little more aesthetic than normal street lighting which will primarily be near the hospital. Part of the reason for the project is that we’re trying to set the stage for development and business growth in that area and we think this will assist in that. There are definitely develop-able lots within the hospital complex and also develop-able properties on the south side of 61st Avenue.”

Commuters can expect some minor delays travelling along 61st Avenue as the project continues. Temporary, one-way stops will be utilized while construction is underway but there will be no hard closures while the project is being completed.

Key decisions for the project were made by the City and their consulting engineers Butler, Fairman, & Seufert Incorporated. G.E. Marshall is the prime contractor on the roadway project currently underway and work is currently progressing as anticipated. Mainline storm sewer work is mostly complete, the regional detention pond has been constructed, and sanitary sewer work is underway. La Porte Construction is working on the rehabilitation and widening of the bridge over Deep River and will continue to do so into the summer.

The project began last July and is slated to be predominantly completed by the end of November 2016. Due to the time of year when the completion of the project is likely to occur, there will be landscape elements that will have to be completed in the spring/summer of 2017.

Information on the project can be found by visiting the City’s website at www.cityofhobart.org or www.hobart61.com.