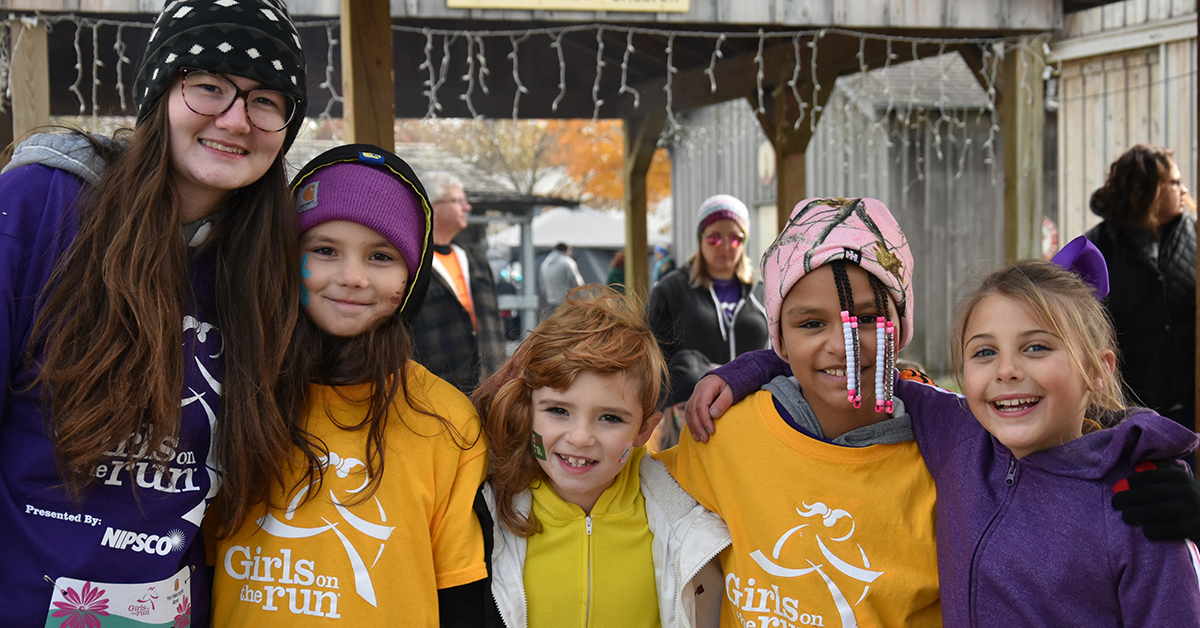 Whether it was running, walking, skipping, or in one case, cartwheeling, it was all smiles and positivity as participants crossed the finish line at the LaPorte County Fairgrounds for the Girls on the Run 5k. The organization is a positive youth development program that uses fun running games and dynamic discussions to teach life skills to young girls from third to eighth grade. During the 10-week season, girls participated in lessons that fostered confidence and built friendships.

The culmination of the program ended with a celebration of festivities prior to the traditional 5k.  Activities included music, Zumba, plus hair and face painting stations.

“We inspire girls to live joyful, healthy, competent lives. Today’s event was a celebration of  the girls completing their 10 week course,” said Communications Coordinator Diane Arias. This was her second year working with the all ability inclusive program.

“I have daughters and I know how important it is for girls to learn how to manage their emotions and build good relationships with others. But mostly we want girls to learn about their own star power and how to activate that star power,” Arias said.

Every year there is one pivotal moment for Arias.

“All the girls are encouraged to get a running buddy. So they complete their 5k with someone in their life whether it’s a parent, a friend, a coach. Just think about being in third or fourth grade and an adult shows up to complete 3 miles with you. There’s adults here who have never been in a 5k and trained so that they can do that for their girl,” Arias said.

The Miller family make it a family affair with all of their daughters participating or coaching. Brett Miller ran his first 5k with one of his daughters. Now the whole family participates every year whether it is in the program or coaching.

Daughter Charlie Miller, a junior coach herself, has a  favorite memory of the time she was waiting at the starting line and saw Ronald McDonald.

Charlie was appreciative of the anti-bullying message.

Aubree Thomas was having fun with the Bingo Scavenger hunt before running with her father Nathan.  Aubree’s parents were looking for an after school program for her when they discovered the girls on the run program.

“We liked how this program builds girls power. She has got a lot out of this and made a lot of friend,” Thomas said.

First year participant Molly O’Brien was happy her parents enrolled her into the program.

“I got to make a lot of friends and it’s been fun being around all these girls with positive attitudes,” O'Brien said.

Positivity motivates participant Torey Morris who has underdone six leg lengthening surgeries in her young life. An infection at birth attacked her leg’s growth plate leaving it shorter than the other. Her last surgery was the year prior. Older sister Tava Daniels, was her running partner. Both Torey’s mom and sister have noticed that since joining the program, Torey has become a lot more social.

“I think this is a good way to get kids involved in afterschool activities,” Daniels said.

Laughter rang out in the air as Gail Beal, a certified Zumba instructor with PNW and the YMCA, warmed the group up prior to the race. This was her fifth season leading the group and she enjoys it every year.

“People are funny at the beginning because they will stay way back and not want to be near the instructor but they come closer with confidence,” Beal said. “I love seeing the kids get out and move to the music even if they don’t know what music is.”

Soon it was time for the girls and their  support runners to line up. After a quick count they were off laughing and motivated by the cheers of friends and family on the sidelines. Waiting at the finish line were star power medals, snacks, and hugs.

Towing a child size wheelchair, Libby Wilson had tears in her eyes as she watched her daughter Ellie Wilson bolt ahead for the Girls on the Run finish line. Born with spina bifida, doctors did not think Ellie would ever walk. Until today, Ellie had never gone this far without using her wheelchair.

“This group of girls she has been with the last couple of months have cheered her on and helped her. It’s been awesome,” Wilson said.

This was the first of two 5K’s that close out the season with the next one on November 10 at The Pavilion at Wolf Lake Memorial Park in Hammond. For more information and to find a local program near you visit the Girls on the Run website https://www.girlsontherun.org/