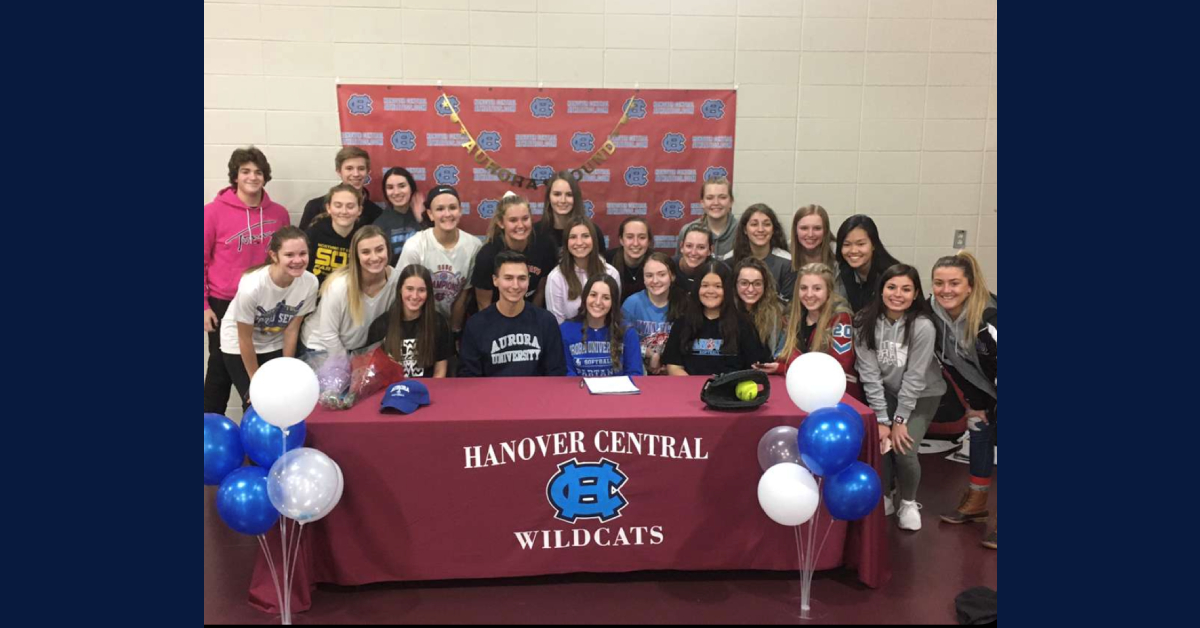 What’s Up Next: National Honor Society is Gearing Up for Christmas

Hanover Central’s National Honor Society is getting into the Christmas spirit. To start the festivities, members volunteered their time to put up decorations outside the school’s office. Now, two Christmas trees greet visitors as they enter the building, beautifully adorned with lights and ornaments.

In addition to spreading cheer within the school itself, the National Honor Society is committed to spreading it within the community as well. That is accomplished through their annual Angel Tree program, beginning in early December. National Honor Society extends the opportunity to all students to participate in this charitable event. Students’ first-hour classes each have a different child in need for which to purchase gifts. Hanover students get extremely excited about the opportunity to put a smile on a child’s face. Throughout the school, hundreds of dollars are donated and many presents are bought, and the Angels’ Christmas wishes come true.

After buying and wrapping the presents, National Honor Society members collect, sort, and deliver the gifts to the place in which the presents will be distributed to the appropriate parties. It is truly a rewarding experience for the members as well as the student body. There is truly nothing like spreading a little Christmas spirit.

What Has Happened: Tyler Chambers Signs Letter of Intent

Congratulations are in order for senior Tyler Chambers who signed her letter of intent to play softball at Aurora University on December 6th, 2019. This makes her the latest Wildcat to do so, following fellow senior Ashtyn Barnett, who committed to play at Depauw University in late November.

Tyler’s commitment was a long time coming. Growing up playing softball, it was one of her dreams to play at the collegiate level. Anybody who knows Tyler will speak to her relentless drive and hard work that she put in to reach that level. By doing so, she became both a standout player and person.

Yes, Tyler is a phenomenal player who has gained first-team all-conference and all-area recognition, but her sportsmanship adds a level to her game that is nearly unmatched. She is a two-time recipient of the team’s sportsmanship award and was even honored by the state for her uplifting attitude after being nominated by an opposing team. Tyler is extremely excited to be able to continue both her academic and athletic career at Aurora, a school where she found the perfect fit.

She is not the only Wildcat player, however, that will be signing this month. Alyssa Albrecht will sign with the University of Wisconsin-Stout and Taylor Towry with Marian University in Wisconsin. An early-congratulations to you girls as well! Way to make Hanover Central proud!

Meet Jaime Frost, Hanover Central Softball’s strength and conditioning coach. After graduating from Hanover in 2013, Frost attended Trine University where she played golf. However, a staple part of her high school career involved playing on the school’s softball team, where she had the opportunity to play with her best friends and make incredible playoff runs, backed by legendary coach Larry McMillen.

While her fastpitch career came to an end after high school, her love for the game never faded. She continued playing slow pitch leagues and ultimately made the decision to come back to her alma mater as a volunteer coach. When asked why she made the decision to come back, Frost explained,  “I loved and missed the game of softball terribly. Once you’re away from something that was once your whole life, it leaves a small void. Helping the team and being around the girls helps to fill that void.” In addition, she wanted to give back to the program that gave her so much.

Well, safe to say, the players are glad she made the choice. Frost serves an important role in these girls’ lives, acting as a mentor and role model. Her ability to be real with the players in addition to bringing comedic relief results in close relationships with the team. In fact, her presence last year was a major factor in bringing a once divided team together in harmony. There is no doubt how much the players love Frost. She has had a bigger impact on them then she knows.

Meet Brianna Nirtaut, a senior at Hanover Central High School. Nirtaut is the epitome of a student-athlete. She is highly involved both inside and outside the classroom. Nirtaut is a four-year varsity soccer player, four-year spell bowl participant, and volunteers at a church-run grocery store to give the less fortunate free groceries, all while maintaining a GPA of over 4.0. As a driven and hardworking person, she hopes to one day become a forensic chemist, where she can use her talents in problem-solving and science. Nirtaut states that “I have always loved figuring out how chemicals/substances mixed together to make new things.” Her interest in this career stemmed from courses in honors and advanced placement chemistry. There is no doubt that she will achieve everything she wishes in life, as her relentless perseverance will take her far. Nothing will stand in her way.

Those who know Nirtaut know that she is a brilliant, hardworking student with a big heart. She pushes those around her to reach their full potential. Everyone that surrounds her becomes better as a result of even the smallest interactions. Nirtaut is a model student both academically and athletically. She goes out of her way to make others feel comfortable and included. She is always good for a laugh or even to talk about music. Her focus extends to the soccer field, winning both Rookie of the Year and Offensive Player of the Year, In all, Nirtaut is a role model for fellow students. Hanover is truly lucky to have her.