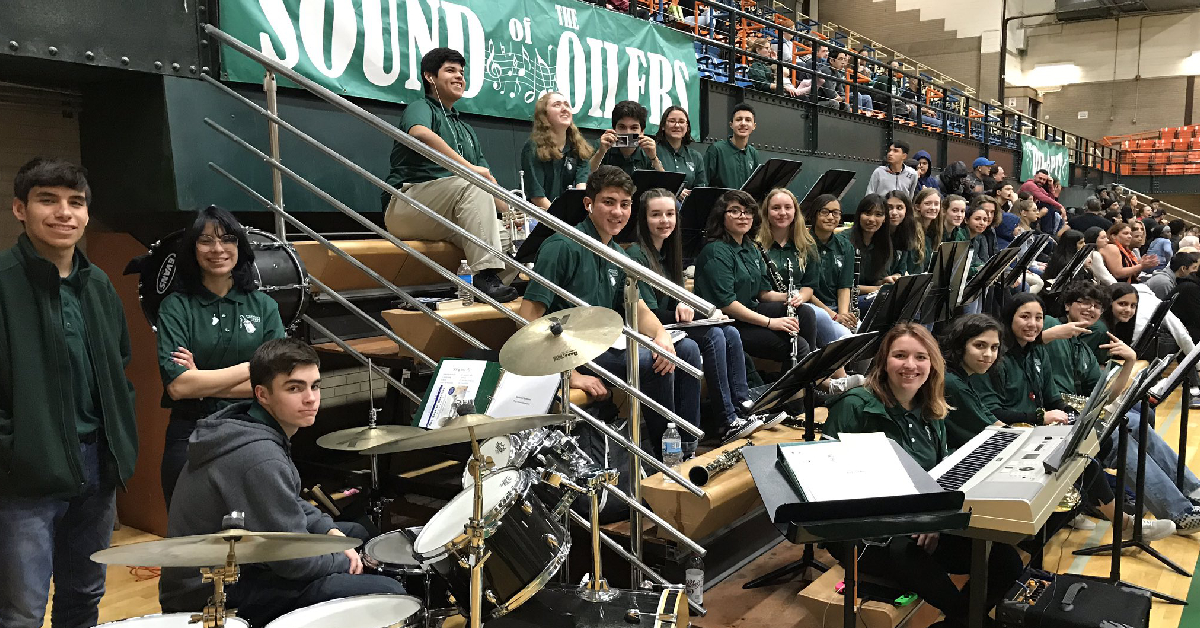 Winter holidays feel as if they have come early this year. Many are already passed Thanksgiving and prepared for the Christmas season. Except for us at Whiting, we still had more to give while still being in the Thanksgiving mood. There is a lot to be thankful for, but this year the National Honor Society decided to throw a, Knock Knock Give a Sock, to be more giving. The idea was started with senior Leslie Lara, who saw that the weather was becoming colder and the kids are getting sick. As an NHS member, she saw it as the perfect opportunity to introduce a foundation that could help with that at our very school and made the sock inquiry to Mrs. Klochan, the NHS adviser.

Starting on Mon., Nov. 11, and ending on Nov. 22, the NHS collected socks to promote awareness of cold weather affecting those who aren’t able to afford them to keep warm. The many socks went to the homeless or those who can’t afford them. There was even an award to any student resource time, or SRT, class who donated the most socks, being an ice cream party. The SRT class that received the party was Mr. Erlich's class with 166 socks! "I think the fundraiser went really well! All of the socks the school raised will be matched and donated to homeless shelters. Shout out to Leslie for bringing the fundraiser to Whiting!" said NHS president, Josemiguel Haro.

On Dec. 7th the Whiting Science Olympiad Team is attending their very first invitational for the year. Whiting High School is the host of this event, as they do once every year. The Whiting team is hoping this year to medal in even more events than in the past. In order to do that, the team has been working efficiently every day after school to make it a memorable event. They even prepared by attending Build-It Day, to help in their building events. Senior competitor, Keegan, said, “I think that the Build-It day helped me get back into the swing of the season. I definitely feel more confident to compete coming out of it, and I think that preparatory events like it should happen more."

There are new events this year as well that have been added for competitors to look forward to. They include Ping-Pong Parachute, Ornithology, and Gravity Vehicle. "This will be my first year in the competition, and being on Team A is even more pressure, but I feel really confident!" said Team A competitor, Aariyana Ortiz. We all can’t wait to see how well our Oilers will do!

The winter concert is also soon approaching for the band and choir. This year the high school band is performing seven songs and the choir will be performing six songs. The band gets up every morning to practice before school and work very hard for their friends and family. Since it is normally winter break for college students, many Whiting graduates come to support their school. It normally brings in many alumni and it is a magnificent show to get many in the holiday spirit.  Mr. Pecher even puts on a song every year for the alumni to come back and sing or play along with the band and choir. "It's a great experience for all in the community to come together during Christmas time and be like one big Whiting family." said sophomore trumpet player, Arriyana Ortiz.

Ms. Hylek is one of our esteemed teachers at Whiting High School. She is Whiting's 10th grade English teacher and adores English more than anything in this world. She believes teaching is her calling. She began working at Whiting in 1997 and has been a prominent teacher since.

Ms. Hylek’s favorite part about teaching is the team-building projects where students can apply each concept of literature they have learned. Lord of the Flies is one of the numerous pieces of literature taught in her classroom. It is a not-so-near-the-surface book that can be dissected in different ways. In her lessons, she likes to have students survive in groups on their own to understand the concept of the book. The students work together and communicate and understand profusely on the main idea of the book. Ms. Hylek is a team builder and loves doing “living the literature assignments” for students to build their knowledge of literature from different perspectives.

Teaching has been challenged to find the most effective ways to educate students. “The most challenging is keeping up with the many changes and rationalize the emphasis on standardized testing,” Ms. Hylek says. Teaching is not always an easy job. There have been many changes in education, and in English, there is so much material and a lack of time. However, Ms. Hylek is the kind of teacher that does the most for her class, trying to get the most of the time she has.

Ms. Hylek has also been an adviser to Whiting publication clubs such as the Tattler (school newspaper) and the Reflector (school yearbook). Her favorite thing about advising is that she can connect with students again after having had the students in English class sophomore year. “I like to know them on a personal level,” she says. She is always driven to support the school and even started a senior issue that pays tribute to graduates and hopefully serves as a keepsake for them. You can always see her with the camera at events and games trying to get the most out of our lives as students in Whiting. “I like being able to contribute to Whiting High School history through our publications,” she says. She does the most for the students at Whiting and wants to make these years memorable to all who attend.

Leslie Lara is an exemplary student at Whiting High School. She works efficiently at anything given to her, on a normal basis. She is apart of the drama club, NHS, academic team, and is in the choir. She also is apart of the ruthless competition at being top ten.

In NHS she initiated a sock drive, and the rest of the members hopped on. She was inducted in May of her sophomore year. Now, being a senior, she likes to work without regrets.

In academic team she competes in the subjects of Fine Arts and History, and in drama club, Lara took the lead in the past two plays. She was Wednesday Addams in “The Addams Family”, and Peter Pan for the play “Peter Pan”. She also took many parts in middle school leading to high school. “It makes me feel nervous before, but once I get up there, there is a certain happiness that you can't get anywhere else,” said Lara

Lara is the type of student that once she sets her mind to a task, she works hard to achieve it. She does this as a student and in every extracurricular activity she takes part in. She is the type of person who wants to look back at her high school days and remember all the good moments. As a senior, she hopes to surpass many of the top ten and go to IU Bloomington. At IUB she plans to attend Maurer School of Law (which is not an easy study at that).

Lara is a striving student who dedicates her time to find things to assist in her future. She's not only an outstanding student but also a great friend to everyone she meets. She sings, acts, and volunteers. When it comes to the best and brightest, Lara most definitely makes the list at Whiting High School.