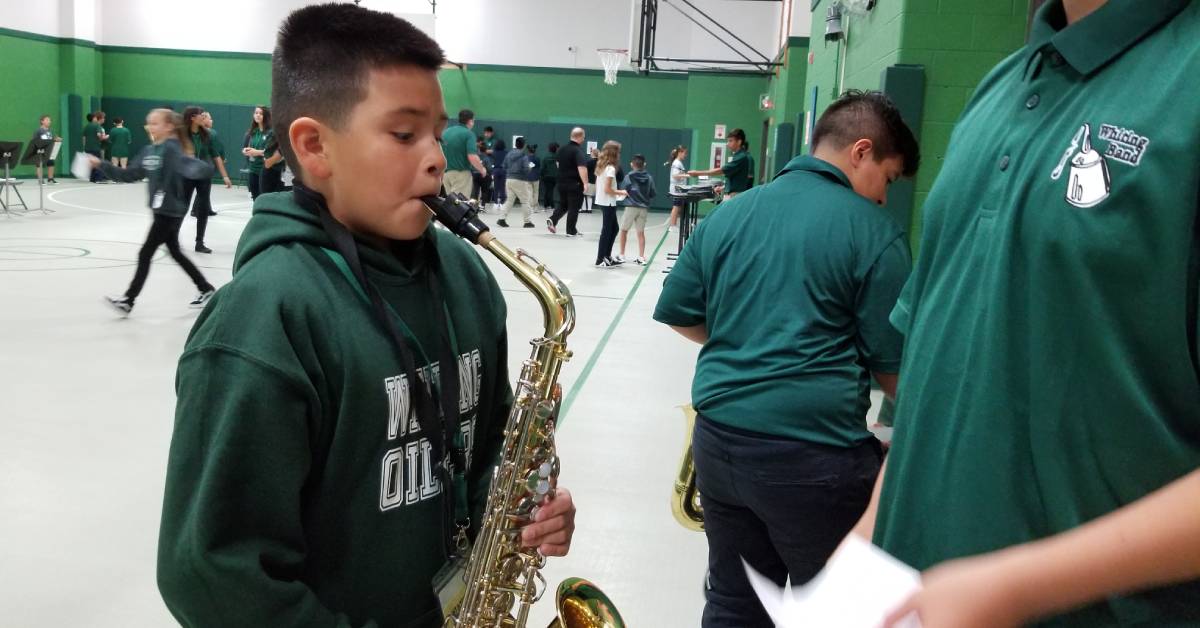 The Whiting Oilers are back in school, and after just one month into the start of the school year, clubs and activities have already leaped into action. On September 6, the 5th grade class of Nathan Hale Elementary lined up to play a multitude of instruments to their heart's content. “An instrument petting zoo,” Whiting Band Director Mr. Pecher called it.

Each year, the Whiting High School Band travels to the elementary school to indulge kids with the joy of music. Once the kids entered, the energy of the room uplifted. The students were in awe of the instruments as the band played the Whiting school song and cheerfully clapped to the rhythm of the anthem as it began. They were then allowed to play any instrument they appreciated. Some were so taken with a certain instrument they decided to play it more than once.

After the elementary students played everything on their list, the band performed songs typically played at sporting events, and they were able to stand and watch the instrument that captivated them the most.

“You could tell the kids really enjoyed being around music and trying something new,” said senior Christian Camacho. “It’s not often that the two schools get to interact with one another, even if they are only a few feet apart.”

The infamous instrument petting zoo will always be a pleasant memory of both the schools getting together to express their passion for music.

“The most stressful part is preparing,” said senior Leslie Lara. “I’m excited for college, but when it comes to the stresses of preparing, that is what makes me the most nervous.”

During the entire week, students wore college gear with pride as they walked around school. The week was filled with college activities, college trivia games, and raffles. Those who won were even awarded a prize that included something related to a college.

The occasion encouraged continuing education and helped the many seniors who were indecisive. They now have more of an idea about where they want to go or what they want to achieve by simply preparing their mindset for college.

During the first week of October, the Oilers are grabbing their spirit gear and getting competitive for homecoming week. This year’s homecoming theme is music genres. The seniors made their first selection for Rock ‘n Roll, while the juniors picked Country, the sophomores picked Hip-Hop, and the freshman had last pick, Disco. The week will be filled with dress-down spirit days to earn points for each class to try and steal the spirit stick, otherwise called the Oilcan. The fun spirit days include Meme Monday, Squad-up Tuesday, Pajama Wednesday, Theme Thursday, and Green and White Day.

“Homecoming really brings everyone together,” Senior Class Sponsor Mr. Harnew said. “The community, high school, and alumni come back to celebrate with the parade, pep rally, and game. This year the Booster Club has really been busy planning.”

This year's competition is heated, and many students have been spending hours preparing for hallway and float decorations, organizing spirit days, and buying other necessities for the dance. Everyone can collectively say that homecoming is the main topic on their minds. The week will end with the homecoming game on Friday against Hanover Central, and the homecoming dance the next day. All the activities lead up to the homecoming dance on Saturday, October 5.

Keegan Carter is one of the many excelling students at Whiting High School and works well to prove it. Since kindergarten, Carter has attended Whiting schools and built up his many interests, including playing his guitar to the Beatles, participating in Science Olympiad, National Honor Society, and Project Lead the Way.

Science Olympiad is one of the biggest sources of pride in Carter’s high school career. He began only last year, but took on many events and strives for his best in everyone. His five events are Astronomy, Codebusters, Fossils, Machines, and Wright Stuff.

“This year I’m hoping to become known as the ‘Astronomy God,’” Carter said. “It’s my favorite event, mostly due to the fact that astronomy fascinates me even outside of SciOly.”

He said that in order to become the “Astronomy God,” he must study up on numerous “space-y topics” such as galactic life cycles, orbital motions, and other fun facts.

Carter also enjoys classes such as Sociology and PLTW.

“Sociology deals with a topic I believe is interesting: people’s actions and how they are in a group,” he said. “I think Mr. Reece does a good job teaching the class.”

Once he graduates, Carter plans to attend Purdue West Lafayette. His goal is to use his skills with computers to earn a bachelor’s degree in Computer Science so that he can thrive as a Software Developer.

“I’ve always been interested in computer mechanics, both software and hardware, but I find myself more interested in the former recently,” he said.

One of the most persevering students at Whiting, Carter takes part in many extracurriculars, thrives in school, and has even built a computer. Carter sees himself becoming a successful software developer and achieving the “nirvana of humankind: a good financial situation.”

One of Whiting High School’s most memorable teachers is history and sociology teacher Mr. Trevor Reece.

Reece is also assistant athletic director, assistant football coach, an epic google map contributor, and served as the Class of 2019 sponsor. Reece is a type of educator who teaches not only his subject, but also many life lessons of the world in general, and has been able to do so at Whiting for four years.

“I know I'm a history teacher, but sociology talks about society today and is extremely relevant to the students I teach,” he said. “I like to [remind them]  how we can be off task, but actually on task as well.”

Sociology is one of the classes Whiting students anticipate. One or two students in each class will attempt to break social norms, not just for a project, but because they are inspired by his class to do so.

“My main goal is to help create positive, wholesome young adults that can go out in the world and be successful in all aspects of their lives—personally, professionally, mentally, and emotionally,” Reece said.

He loves history and social sciences, but teaching young adults how to become good people is a difficult task in which Reece capably handles. For him, history is a medium on how to accomplish just that.

“Not being a class sponsor this year has been bittersweet. I feel less busy with a class and managing them, but at the same time, I miss my kids. They were, and still are, a great group of young adults,” he said.

He and his class accomplished many things together such as the Spirit Ball at sectionals and the Homecoming Spirit Stick—all just last year.

“The Class of 2019 was great and they are greatly missed,” he said.

Reece appreciates any time taken to talk with teachers about education.

“Too much we see the bad about what some teachers do and not so much the daily grind of educators,” he said. “I will say this Senior Class at Whiting High School is the first class I will see go all four years of high school, ever. I hope I've had as much of a positive impact on them as they have had on me.”