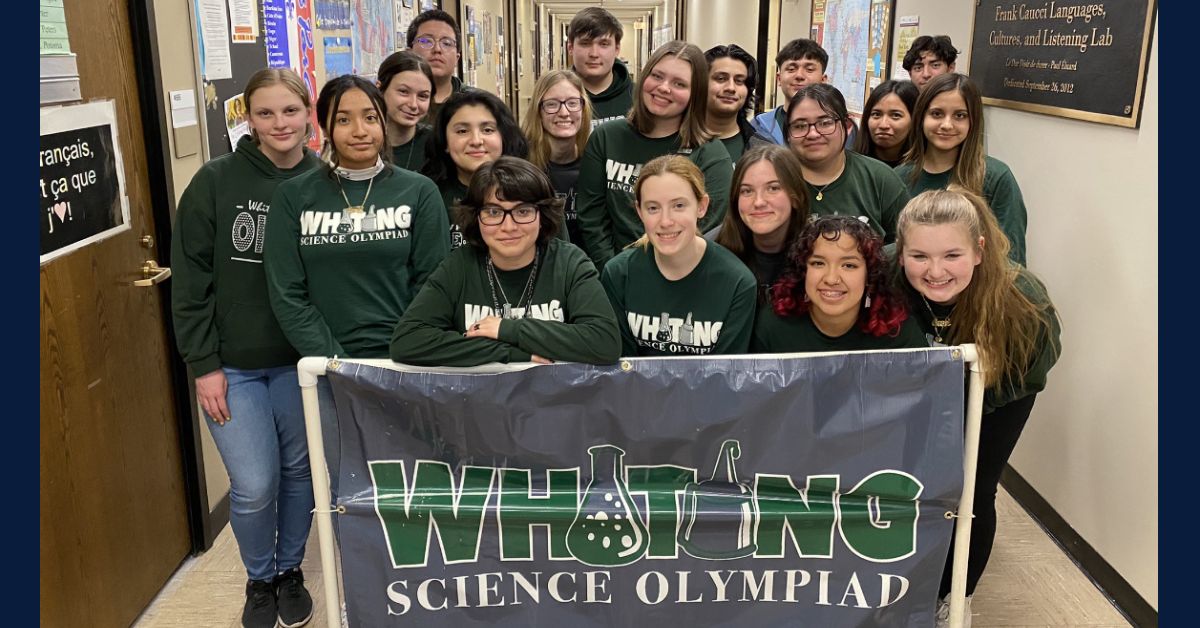 The Whiting High School (WHS) Science Olympiad team competed at the their state competition at Purdue University in West Lafayette on March 13.The team had a successful competition previously in the beginning of March, placing first in the Regional tournament at Indiana University Northwest. WHS Science Olympiad placed eighth overall at the state competition at Purdue University and received medals in seven out of over 20 different subjects. The team's coaches, Jeremy Long and Dan Nichols, had high hopes and could see the potential of the team since the beginning of the season.

Whiting High School is the early stages of their spring sports such as boys golf, baseball, girls tennis, and softball. The four teams have been conditioning and strength training since the end of January and are now fully practicing as teams for their upcoming seasons. Girls' tennis had a successful season last spring, winning the sectional championship for the 13th year in a row and are excited to hopefully continue the streak. Boys' golf is also enthusiastic about their upcoming season and are hopeful for another successful year. Baseball and softball are also both ready for their seasons and are expected to have success this spring. Softball has their head coach, WHS Science Teacher Kelly Morando, to help pepare the team with as much practice as possible. All spring sports are eager to begin their seasons once they return from spring break at the end of March and hope to finish the school year strong.

WHS Math Teacher and Baseball Coach Tim Mysliwy is in his seventh year of teaching at WHS. Mysliwy said the reason he is working in education is to help people and allow others to learn in a way that he believes helps students.

“I’ve always loved baseball and played it my whole life. I have always wanted to give back to the game when I was done playing,” said Mysliwy.

Mysliwy also mentioned how he is looking forward to the spring season of baseball this year thanks to the fine group of students participating, and getting to see how they develop and become better throughout the season.

“Seeing them grow since last year, as well as just looking forward to a successful season as well as a long play off run,” said Mysliwy

Mysliwy gave advice to WHS students and other athletes when he mentioned that setting goals for yourself is always a great option and maintaining those goals gives a better chance for a great outcome.

“Work hard, focus on the task at hand, do as much as you can to achieve your goals and don’t leave anything out there from those goals,” Mysliwy said.

Mysliwy believes that by being in education and coaching, he has impacted his own life by staying connected to the things he loves most.

He is able to teach a subject he enjoys, as well as stay involved in a sport that he has many memories in and wants to continue to be active in.

“It gives me a chance to work with young people and see how they develop over the season as well as the years they play. Seeing them become better and develop is something I truly enjoy to see,” Mysliwy said.

Mysliwy is very enthusiasm for the school, as well as for the upcoming WHS baseball season.

He believes they will have a successful and exciting season, and is overall looking forward to what is to come.

Junior Esmerald Garcia shows her school spirit in the numerous activities and extracurriculars she participates in at WHS.

Garcia also participates in Big Brothers Big Sisters, and is a junior coach at the Whiting YMCA branch of Girls on the Run, outside of WHS.

She also believes many students can be very active within their own communities by focusing on time management skills and practicing organizational skills to be able to achieve their own personal goals while helping those in need.

“Advice I would give my peers would have to be developing time-management skills. It is easier said than done, but once you start scheduling yourself actively, so much is possible,” Garcia said.

As she is in the final weeks of her junior year at WHS, Garcia is excited for her senior year in the fall and she looks forward to the numerous opportunities, memories and overall events to look forward to. Garcia is a council member of her junior class and is extremely involved within planning events such as prom, fundraisers, and other activities that are enjoyable for both her class and other WHS students.

Garcia also adds that she wants to make the most of her senior year, as many other students do, and continue to be involved to help her peers have a great experience at WHS.

“I have had such a multitude of experiences in high school, so narrowing it down to one is quite difficult, but I think medaling second in the state in my event of trajectory for Science Olympiad this year has to be really high up in the ranking!” said Garcia.