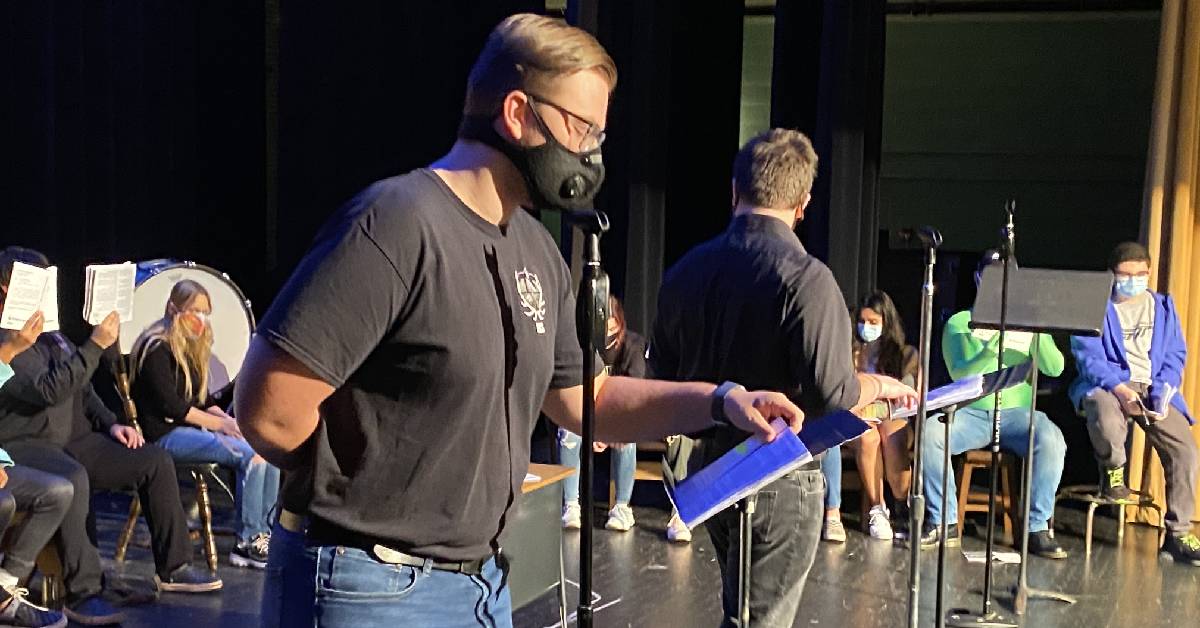 On Tuesday, November 17, students involved in this year’s fall production at Griffith High School recieved the news that the show would be postponed for a later virtual event. This planned event was scheduled to take place on the weekend of November 13, for a showing of four performances: three in person and one virtual. Due to a mass amount of students sent home from contact-tracing efforts, the directors of the Griffith Theatre Company and administration of Griffith High School made the difficult decision to postpone the event.

One of the students sent home during contact tracing was senior and actor Vincent Zarndt.

“I felt really sad when I got sent home, because I thought I would be taken out of the show and it would go on without me. I kept thinking, ‘what am I going to do? It’s my senior year fall show and I’m going to miss it,’” said Zarndt.

Fortunately for students that were in the same situation as Zarndt, the theatre directors and administrators found a way to adjust the performances so no one would be left behind.

The Griffith Theatre Company will perfom the fall play on Friday, December 4 and Saturday, December 5 virtually via livestream. All community members, families, friends, and those interested in theatre are invitied to join. For more information regarding performances, please visit Griffith Theatre Company on Facebook, Instagram, Twitter, or at griffiththeatrecompany.com.

Griffith Theatre Company will also host a drama-night-style performance this year, unlike previous fall production performances. One act productions being performed this year are War of the Worlds and Tracks.

War of the Worlds is a radio broadcast starring Orson Welles that made its initial debut in 1938. The show tells the story of a foreign species from space invading earth, changing the world as they know it.

Tracks is the story of individuals from different backgrounds who meet in a subway station and come to the realization that their backgrounds don’t align. They later find out that they are all dead.

Many students, such as sophomore and actress Julia Gonzalez, have roles in both shows.

“My favorite show was Tracks. I really liked the plot, and the overall writing of the show was very good. It’s definitely my favorite script of any show I’ve been in,” said Gonzalez.

“A jack of all trades” is a phrase that describes Griffith High School teacher Jenna Parker very well. She teaches multiple classes every day and sponsors the senior class, as well as serving as the thespian sponsor and head director of the Griffith Theatre Company.

Parker has been a thespian sponsor at Griffith High School for seven years, and the head director of the Griffith Theatre Company for six years.

Passion is one of the most important qualities of being a teacher. Parker shows her passion adamently.

“I will tell anyone this—I have the greatest group of kids in the school. The best part of my day is going to the auditorium to work with them. I have always loved theatre, and to watch our young adults learn, perfect their craft, and get excited about theatre never gets old,” said Parker.

This year has brought some challenges for the theatre company in terms of COVID-19.

“Making sure everyone is healthy has been our top priority, so we’ve had symptom and temperature checks at rehearsals, and have chosen shows that optimize social distancing and can be performed on Zoom in the event we cannot host a live show.”

She continued, explaining that they “wipe all materials, props, and seats at the end of each rehearsal.” Performers also have their microphones taped on top of a mask, so they can be heard clearly, and more.

“I believe that it’s worth it to try. We must stay safe, but we also have to try to create experiences for our studemt body that provide a safe outlet to escape,” said Parker.

“I majored with a bachelor of science in history and secondary education from Ball State Univeristy. Chirp, chirp. Go Cards!” said Parker.

All students involved greatly appreciate Parker’s passion and devotion to teaching and the theatre company. The Griffith Theatre Company is incredibly lucky to be led by Parker!

This year was Visak’s first time working in a costume role for a production with the Griffith Theatre Company.

“I chose to do costumes because I thought it would be fun! Most of my friends participate in drama so I figured why not try it out. I didn’t want to act, so I chose costumes because I like Shannon Scheidel [costume director] and the girls involved are super cool,“ said Visak.

Two weeks before the initial show date, the news of costume directer Shannon Scheidel needing to quarantine was made known. This left the costume department working independently with the help of Scheidel via Zoom.

“I was truly upset and worried that I wouldn’t be able to get to be at any of the shows! I was lucky that I have an amazing crew and that we didn’t have much left to get ready for the show,” said Scheidel.

Visak stood out amongst the group, working efficiently and doing her job as best as she could, despite being new to helping with costumes.

“I had to make a lot of decisions independently and take charge of costumes. I really missed having Shannon Scheidel around to help us out and guide us through certain situations. It was especially difficult because this was my first year in costumes, so I had to learn a lot really quickly,“ said Visak.

Visak helped lead the costume crew to do their very best while also maintaining a positive attitude. It’s students like Visak who keep the Griffith Theatre Company a positive atmosphere of hard-working students.