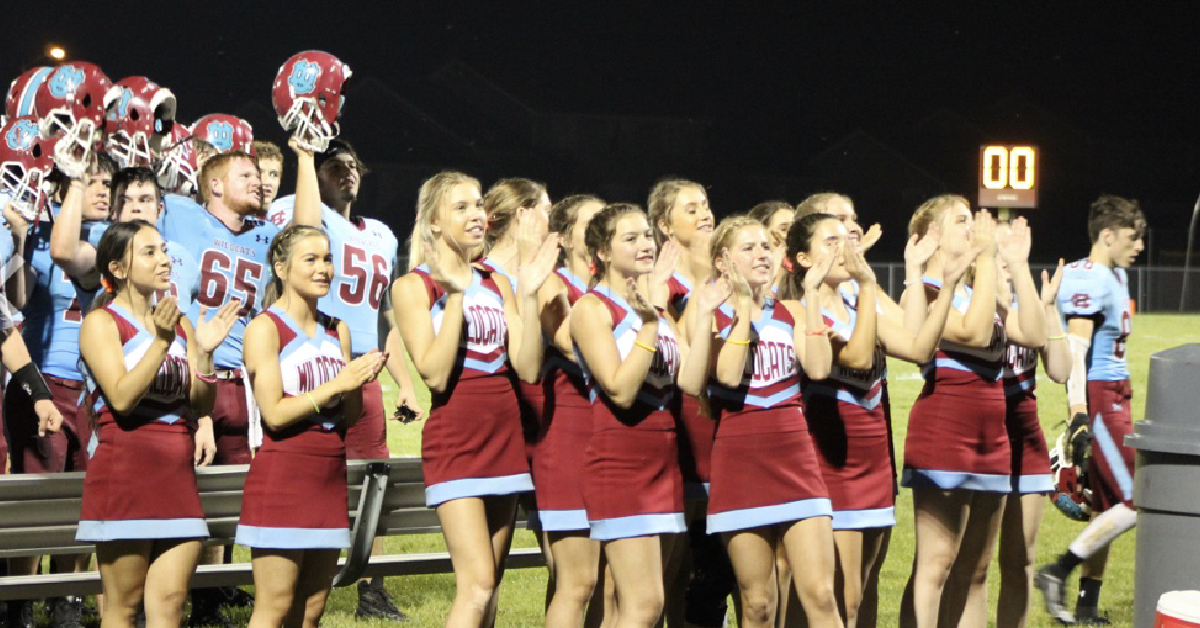 What is Coming Up: Cheerleaders Competing at State

On November 2, for the first time in the program’s history, Hanover Central Cheerleading qualified for the state competition by winning the preliminary competition held at Greenfield High School. The cheerleaders have worked hard and have shown great dedication all season to get to this point. Every single day they could be found in the gym, practicing their tricks and cheers until they reached perfection. The cheerleaders performed their routines at school assemblies, football games, and basketball games. They were out there, rain or shine, to support the school’s sports teams. Anybody who has seen the cheerleaders perform this season will say that they are not surprised by the team’s success. They leave their audience in awe, wondering how they can pull off such sophisticated stunts. The cheerleaders have always supported the students—now it is the Wildcats’ time to return the favor.

Led by seniors Rachel Fleszewski, Ashley Owen, Hailey Grcich, and head coach Angel Hoover, the cheerleaders will travel to New Castle High School on November 9 to compete in the state competition. They are set to perform at 2:06 p.m. All their hard work is sure to pay off, and they will continue to make Hanover Central proud.

Meet Kelly Bermes, Hanover Central’s beloved athletic director. Bermes is relatively new to the school system, being hired in 2018. However, her impact on the students and athletics was immediately evident. Students love her kind, warm, inviting demeanor. For Bermes, the feeling is mutual.

“I truly love the kids here and haven't ever met a nicer bunch of kids,” she said. “The respect and kindness from the student-athletes is a reflection of how they are raised at home, and I congratulate the parents.”

She remains extremely involved with the athletes, regularly attending games and stopping by practices. She manages to give all sports equal attention, not allowing any to go unnoticed.

Bermes realized she wanted to become an athletic director after she began supervising gymnastics at the school where she was previously working. Throughout the experience, she picked up the rules to various sports. She then applied for an Assistant Athletic Director position and got it. The rest is history—her impact on her future athletes was cemented for good.

To Bermes, the future is bright for Hanover Athletics. She hopes to work on updating both the indoor and outdoor facilities. In addition, she wants to make sure that all teams have JV and C teams to give every student a chance to play. In all, Bermes does an incredible job of extending opportunities to all students, allowing them to achieve their full potential.

Marissa Metcalfe is the definition of an exemplary student. She is high achieving in the classroom and is involved in numerous clubs such as National Honor Society, Women’s Choir, and Key Club. When she is not in school, she likes to spend her time keeping up to date with the news and solving puzzles. However, Metcalfe has an incredible talent - bowling.

As one of the top bowlers in the state, Metcalfe leads Hanover’s team, currently ranked number one in the area. She did not achieve this success by sheer luck. Instead, Metcalfe devotes much of her time to progressing her skills and competing in tournaments. She hopes to continue her bowling career at Saint Francis University Pennsylvania, where she will compete at a division one level. Metcalfe also plans to compete internationally later on in life in South Korea. There, she will bowl professionally. Helping her along the way are two professional coaches who devote their time to improving her game.

Metcalfe encompasses what it means to be diligent and motivated, and these traits will carry her to success. Her infectious exuberance makes those around her realize that life is meant to be fun. Metcalfe is a truly incredible person, and the Wildcats are happy to call her their own.

What Happened: Bryce Noble sent off to State by student body

Sophomore Bryce Noble qualified for the state cross country meet on October 26. This is an exciting occurrence for the Wildcats, as it has been years since an underclassman has accomplished this feat. To qualify, he ran a 16:34, taking the final individual spot.

The Wildcats are known to support their own. In fitting fashion, Principal Tami Kepshire orchestrated a grand demonstration. As Bryce left for his state meet, the student body lined the hallways to cheer him on. As he walked through, students cheered and clapped, sending him on his way to represent the school proudly. The look on Bryce’s face was priceless—he was obviously touched by the moment. In the end, Bryce stopped for a rendition of the school song performed by the band. After that, he was off to Terre Haute to compete.

With his school rallying behind him, Bryce competed against the best of the best. He battled hard, pushing through until he reached the finish line. In the end, Bryce placed 128th at the state meet. This experience will only help Bryce in the future. Being only a sophomore, Bryce has two more years to continue his success and lead the cross country team to victory.