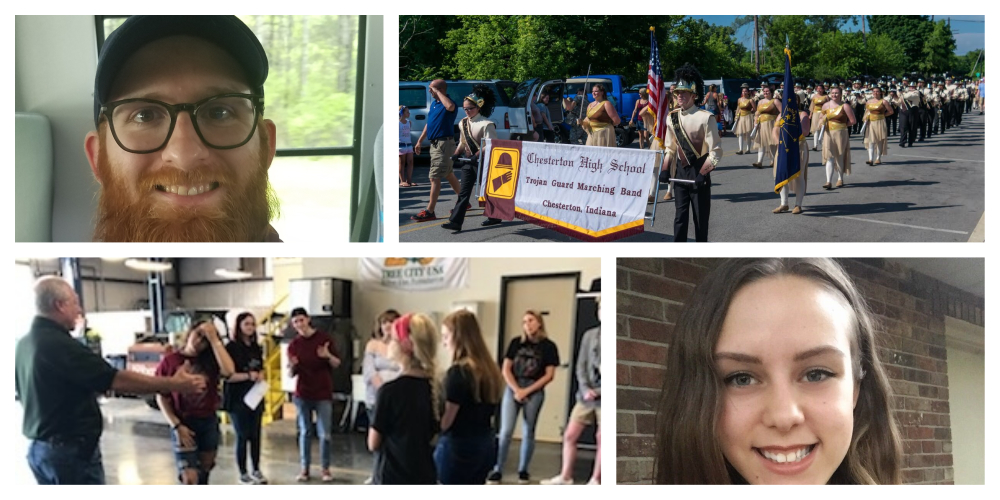 On the 4th of July, the Chesterton High School Trojan Guard will be participating in three patriotic parades. One will be in Porter and two in the Chicago suburbs Glenview and Northbrook. The Trojan Guard will be marching alongside other bands, local charity groups, and other associations.

“The Porter/Chesterton parade will begin early in the morning, beginning near Yost Elementary,” said Band Director Adam Bess. “Afterwards, we will travel to the Chicago suburbs for the Glenview and Northbrook parades in the early and mid-afternoon.”

This event is not only a fun thing for all members of the community, but it also benefits the Trojan Guard itself.

“This event acts as a fundraiser for the Trojan Guard, helping further our success as we head into our competitive season,” said Bess. “This event is really important to the band and me because it showcases our talents as a marching band and helps give back to our community that generously gives to us.”

The parades are community events, that bring the student body and townspeople together along one street, cheering for the marchers and feeling patriotic.

“Marching bands have long been an establishment in local parades across the country, especially here in Chesterton,” said Bess. “To see the local band participating means the community’s value in the arts and education is alive and well!”

There are many fun songs and routines to look forward to from the students and other organizations.

“I’m most looking forward to seeing the familiar faces along the parade route and watching people’s enjoyment as we pass by,” said Bess.

“We took a bus to the Police Department and were there for about an hour. We were given a tour and a presentation on how the department works from the Chief of Police David Cincoski,” said US government teacher Christine Bullock.

The tour not only gave students an inside look into their local law enforcement, but also into the place where their local laws and decisions are made.

“We then went to the Chesterton Municipal building and met with James Ton who is the Town Council Member and Bernie Doyle, Town Manager,” said Bullock.

This trip was a way to give students an interactive look into the closest level of government and showing them how they can get involved with their local decisions and law making.

“I wanted students to understand the importance of federalism and division of power,” said Bullock. “The roles between Federal, State, and Local Government.”

She noted that the trip was a fun way to get students’ noses out of their textbooks and learn valuable information about their town.

“I was happy that my students met the individuals who are responsible for running our local government,” said Bullock. “I love my class and am glad they had a great experience.”

Chesterton High School English teacher, Jacob Lukach, is taking on the responsibility of being newspaper advisor for the upcoming school year.

“The activities I will be part of the next school year are mainly Newspaper and Speech,” said Jacob Lukach. “It will be my first year running the Sandscript, and I’m thrilled to be doing so. This past year, I served as an Assistant coach for Chesterton's speech program, which I will continue duties for next season.”

The previous advisor, Charles Smith, stepped down due to personal reasons and left the position to someone that he felt would excel.

“One of the biggest reasons for me taking the Newspaper adviser position was because of my love for writing, specifically journalistic writing,” said Lukach. “As a teacher, I love opening eyes to new information, and with newspaper, we get to open eyes to numerous topics, issues, and controversies. Furthermore, the writing background runs in my family, as my brother, Adam, works for the Chicago Tribune.”

The task of taking over a news room is very daunting and requires a lot of skill and a very driven mindset.

“My goals for the newspaper next year are simple,” said Lukach. “I want to begin a major digital overhaul of our newspaper. We will still print in a classic format for some of those interested, but by moving digital, we’ll be able to save tons of money for the program going forward, while also generating far more interest and pageviews for our writing staff. We have talented people writing for the Sandscript, and their voices deserve to be heard more than they are in our current format.”

The summer provides a good amount of time for teachers to prepare for their upcoming year and take a much needed break from teaching and grading papers.

“With summer to prepare and get ready this time, I anticipate this being different, and my classes will run extremely smoothly,” said Lukach. “My goals as a teacher next year are to just be more organized and prepared.”

Chesterton High School senior, Olivia Johnson, has recently been a part of a spectacular and fun event. On June 16th, Olivia, along with her teammates on Cheer Extreme Chicago, performed a dance routine alongside the band New Kids On The Block.

The girls were not performing for the entire concert, so they were able to view the portion of the concert that they were not in.

“By 7p.m., the doors opened and our coaches took us to our provided seats in the front row to watch the concert,” said Johnson. “We were performing at 9:30p.m., but we were brought backstage a few songs before our performance so we would be ready. We got pictures with all the performers then headed to our spots below the stairs.”

Performing is always a pleasurable experience, but performing as background dancers for a very popular band does give performers bragging rights and fond memories.

“I was extremely nervous and tried to calm myself. The sound of the crowd and the music was deafening,” she said.

It can always be nerve-racking performing for a crowd no matter the size, but it surely is scary and exhilarating to perform in front of an arena.

“Even though we are competitive cheerleaders, for this performance we served as background dancers,” said Johnson. “It was amazing, none of us had ever performed for a crowd that big. Every seat was filled. We returned to our seats afterwards and enjoyed the rest of the amazing concert.”

Being background dancers for a popular band is an amazing thing to look back on, but is also a way to boost and build up your self confidence going forward.

“This was an amazing way to kick off the new cheer season, but also a fun thing to do over the summer,” said Johnson. “It is a nice thing to look back as I start my senior year of high school.”