As the temperatures begin to cool, and the sun begins to set a little earlier - it is apparent that fall sports have begun at Washington Township. The team to watch this fall sports season is the Washington Township boys varsity soccer Team. The boy’s varsity soccer team is the team to watch because of the heavily dominant senior player makeup along with many newcomers adding their contributions to the team. Newcomers also include the coach, Mr. Michael Paul Hutchins, as this is his first year coaching with the Senators. 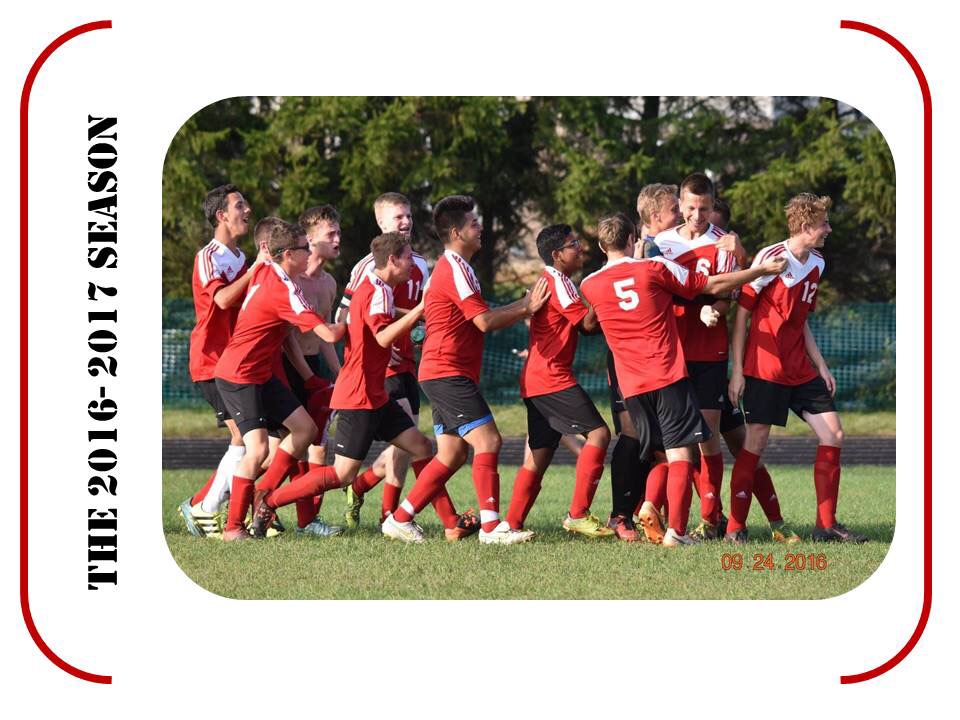 The boy’s varsity soccer team had an impressive season last year, from dominating opponents in the regular season to winning the Washington Township Invite. Last year’s team was coached by Mr. Jacob Fisher. The team consisted of 8 Seniors, 7 Juniors, 3 Sophomores, and 2 Freshmen.

With the team makeup being a majority of upperclassmen, the team was strong and had an advantage over opposing teams with a more diverse makeup in terms of grade level. Leading scorers included Braden Kingery (Senior), Caden Cantrell (Senior), and Bryan Vences (Junior). With some of the main scorers graduating, the remaining Senators needed to start developing their skills to contribute to scoring and towards the end of the season Michael Luna (Freshmen) started putting major numbers up on the board.

Going into last season, the boys varsity Team did not have a goalie. Members of the soccer team, Gavin Funkhouser and Brandon Swann took matters into their own hands and recruited their friend, Michael Olson to fulfill the task. Michael had never played soccer prior to last season.

“It was actually funny how it came about, I’ve played basketball my whole life then the guys had asked if I’d be interested in playing. I didn’t even own my own pair of cleats or shin guards - I wore Gavin’s old soccer gear all summer to practice. I quickly fell in love with the game," said Olson.

With intense hours of practice throughout the summer and regular season with Goalie Coach, Mr. Rick Cantrell, Olson assumed the role of goalie perfectly.

Coach Jacob Fisher, informed his team this would be his last year with them as their coach.

He said, “This season was a huge test for our team. Our schedule was more difficult and the team dynamic was vastly different than years past. We had a lot of tough games and hard losses, but in the end, we were able to pull together and set a new record for most wins in our program’s history. The record was great, but more importantly, the team grew tremendously.”

With 8 Seniors and their coach leaving at the end of the season, the remaining varsity soccer players knew an extensive amount of work would need to be put in by their team so they could uphold their reputation and continue on their team successes in the upcoming season.

The boys varsity soccer team is back and better than ever hoping for yet again another successful season. Throughout the summer, the soccer boys met regularly for Open Fields and Conditioning - the Senators are not settling for mediocrity. This season is about winning the Washington Township Invite, winning Sectionals, being PCC Champs, and playing strongly throughout the regular season.

The boys varsity soccer players have dedicated their season to make a mark of changing the past and bringing a newfound reputation to their program. This year’s team is composed of an exciting repertoire of underclassmen - showing extreme amounts of potential to grow throughout their soccer careers. A few underclassmen to keep an eye are Sunjay Ramon (Central Defensive Middle), Caden Mason (Left Wing), Charlie Schmidgall (Goalie).

The Boy’s Season is in full swing, but they have gotten off to a rough start. Currently, the boys varsity team is faced with injuries - having 3 of their starters bench bound. The team has played some of their toughest opponents in the beginning of their seasons, such as Morgan Township and Boone Grove. The boys have had to come together to provide quality competition while trying to pull off a win; sometimes more successful than others. As the season progresses, and medical releases are given, the boys are developing and becoming a more cohesive unit. The team is newly coached by Mr. Michael Paul Hutchins. Coach Hutchins played soccer his whole life and has established a love for the game. He has all the necessary credentials to lead the Washington Township boys varsity team to a successful season. He expects nothing less than a sectionals victory for his team.

Get to Know the Captains: 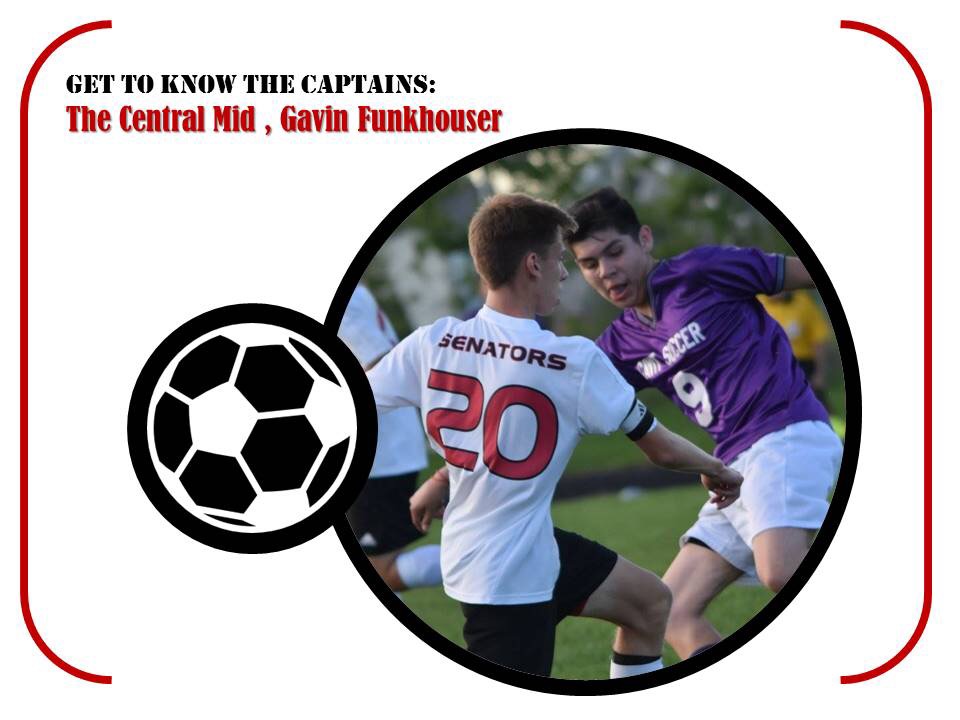 One of three captains, the first captain to meet is Gavin Funkhouser (Senior). Gavin’s position on the team is the Center Middle. He grew up playing soccer, 13 years in total. Soccer has always been a family game in Gavin’s house - his parents even had t-shirts made for his senior season! Gavin has been a member of the boy’s varsity team all 4 years of High School. Having played in too many soccer games to count Gavin was asked his favorite memory throughout his athletic career; Gavin said, “My favorite memory would have to be the time I broke a defender’s nose during a game." Other career highlights for Gavin include being a 2-time recipient of the Varsity MVP award and being a 2-time Varsity Captain during his Junior and Senior seasons. Gavin was also named a Player to Watch throughout this 2017-2018 season. Going along with the interview, Gavin was also asked what he felt his contributions to the team were; he said, “I feel my role on the team is to be a playmaker, which includes moving the ball and allowing for opportunities to be scored on goal. Along with playmaking, another role I hold on the team is being a defensive leader”.

Off the field, Gavin is committed to his school work and strives to always do his best. At Washington Township it is constantly stressed all sports members are STUDENT Athletes - meaning school work comes before anything else. Academic accomplishments for Gavin include making the Highest/ Distinguished Honor Roll and being a DECA State Finalist. Gavin’s plans after graduation are to attend Indiana University in Bloomington, Indiana. Gavin’s plans to major in Computer Science and specialize in Security and Artificial Intelligence. This being Gavin’s last season he is most looking forward to playing with the new comers to the team and really showing them what the boy’s varsity soccer team is all about. 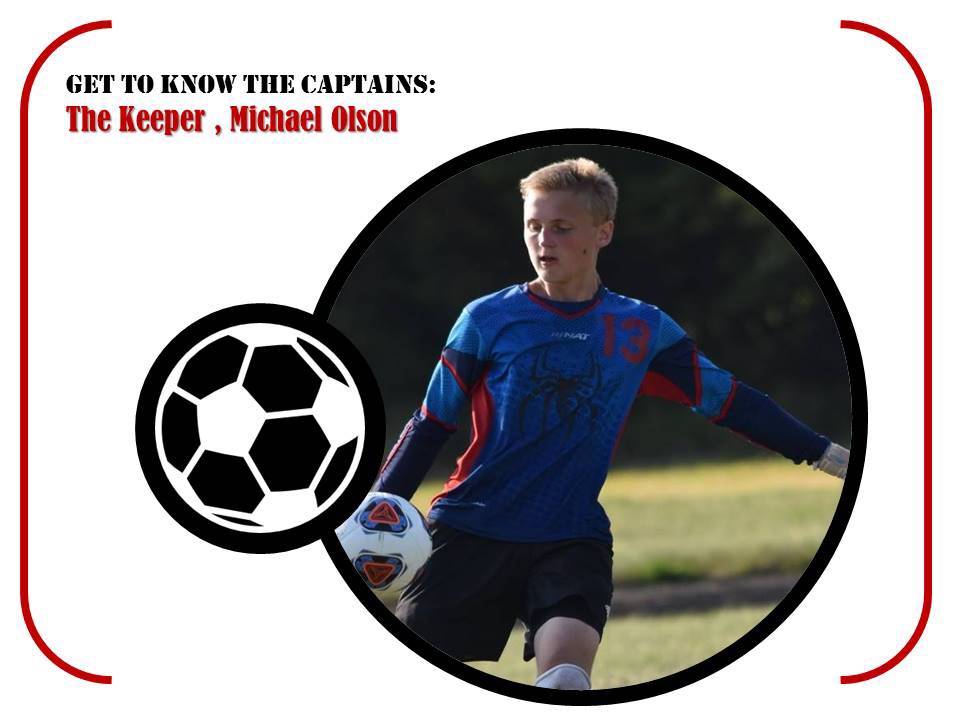 Michael Olson (Senior), is the second of three captains on the team. Michael’s position on the team is Goalkeeper; he has only played soccer for 2 years, where both of those years he played on the boy’s varsity team.

Having only one season to look back on, when asked his favorite season memory he said, “Winning the Washington Township Invite would have to be the best memory. As a team, we all woke up at the crack of dawn, got to the field, played challenging teams all day long, and then we got to celebrate with the trophy at the end of the day. Winning on your home field is also a rewarding experience in itself.”

More career highlights for Michael Olson include being a recipient of the Most Improved Player award for the 2016-2017 season, Center Player of the Game against Boone Grove on August 24, and 2-time Varsity Captain. Olson was also named a Player to Watch this 2017-2018 season, given that the season is only four games in and he already has approximately 90 saves. When asked his role on the team, Michael said, “I give my all each game, especially lately as my team has a lot of players on the bench due to injury. We’ve been playing some tough teams without some of our strongest players so I’ve also been a source of encouragement for my team trying to get us through the game."

Off the field, Olson is in the top 10 of his class academically. His academic accomplishments include being of the Distinguished Honor Roll all 4 years of High School and competing in DECA Districts and continuing on to be a DECA State Finalist. He is also part of the Washington Township’s Student Council, where he has been a member for 4 years and partaken in community service events such as the Opportunity Enterprises Pack-a-Thon and the Turkey Trot. Michael’s long term plans for after graduation are to attend IUPUI in the Fall of 2018 and major in Pre Med. Michael’s short term plans include winning sectionals, enjoying the remainder of his senior year, and most of all wearing his Spider Man jersey in the goalie box. 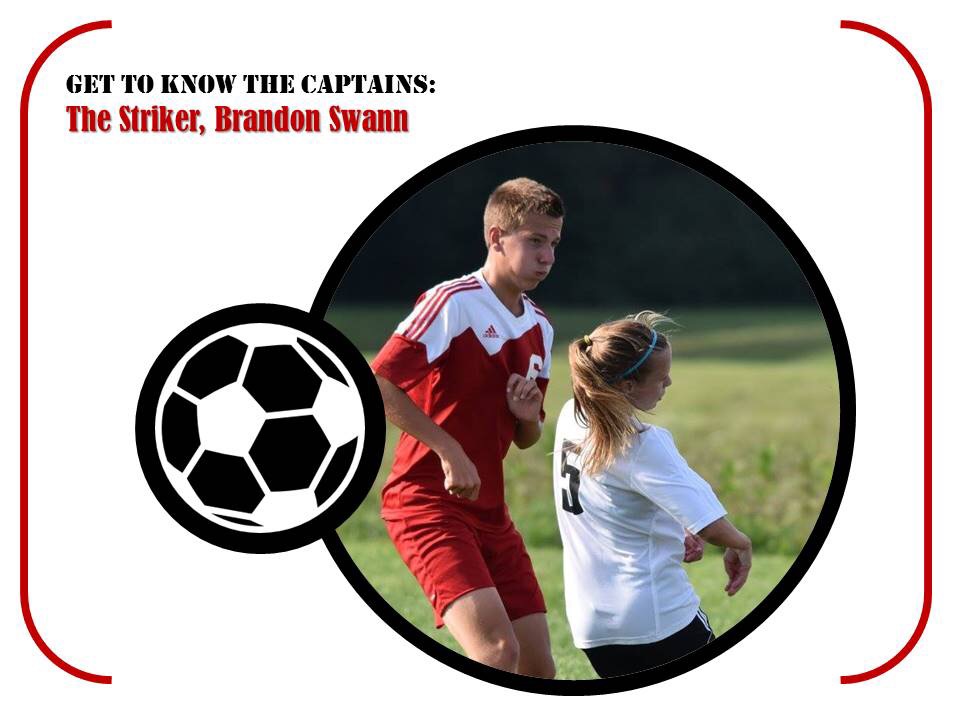 The last, but not least of the three captains, is Brandon Swann (Senior). Brandon’s position on the team is Striker. Brandon has played soccer for 4 years, all of those years playing on the Washington Township boys varsity team.

The team each has their accounts of favorite memories.

Swann stated “Along with Michael, it would have to be the Washington Township Invite. Of all the years I’ve been on the team we’ve always hosted our own invite and last year was the first year we’ve ever won it. The games were just insane all day which made the win even better." Brandon contributes leadership and versatility to the team - and this year his leadership skills are being put to the test as this is his first season fulfilling the role of Captain.

Off the field, Brandon is second in his class while maintaining a Distinguished Honor Roll status. He is involved with academic extracurriculars such as Student Council, Key Club, DECA, and Academic Teams. While competing in DECA - Brandon and his partner, Bobby Walker, took districts by storm, advancing to State in Indianapolis, and then Internationals in Anaheim, Ca ifornia.

Brandon said, “This will definitely be one of the highlights of my high school experience. Not many people can say they’ve been to California and then with some of their closest friends. Being in California made all our hard work worth it, and made the work we still had to do while we were there easier."

After graduation, Brandon’s future plans include attending Indiana University in Bloomington to study business at the famous Kelley School of Business. With the remainder of his Senior soccer season Brandon plans to enjoy the time he has left playing the sport he loves with some of his closest friends, he hopes this will be the year Washington Township wins the Sectional Tournament.

He said, “It’s a long time coming for our program. Being a part of this program for 4 years - I’ve been apart of teams I felt were capable of winning and we’ve come close a time or two; if our team could win this year it would be the best way to end my soccer career at Washington Township”.

The Washington Township Boy’s Varsity Soccer team plays Tuesday, August 29 against Hanover Central at Home. All you Senator Fans come out and cheer the boys to a win!