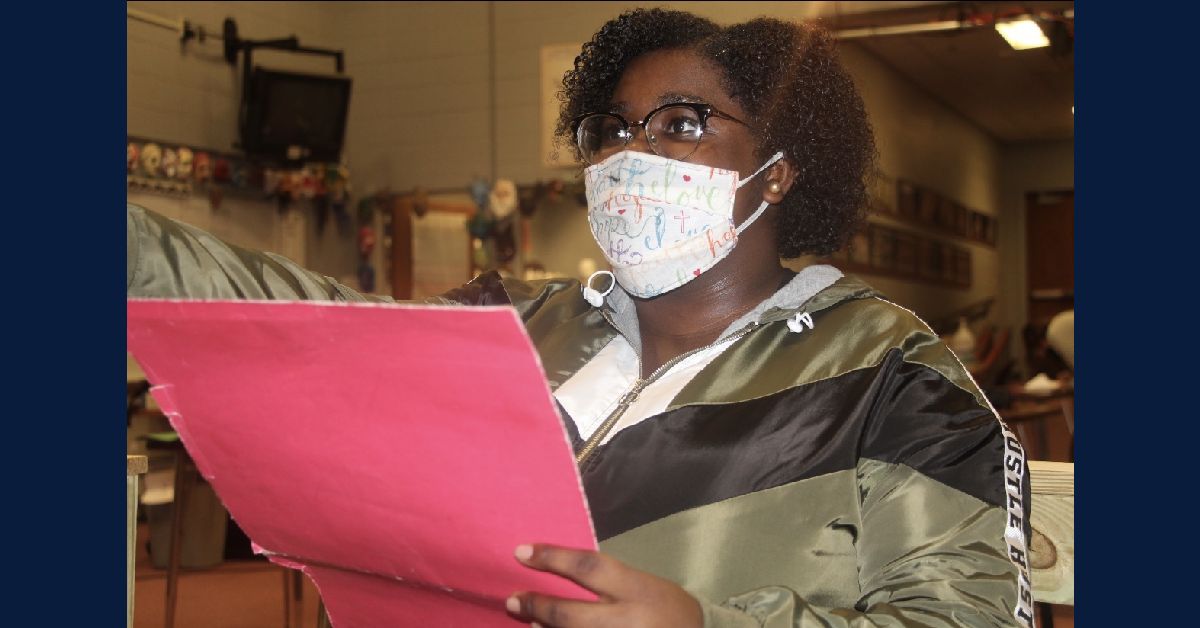 Throughout the month of March, thespians across the globe are celebrating Theatre in our Schools Month (TIOS), which promotes the importance of theatre education through social media, communities, school boards, and even elected officials. Merrillville High School Thespian Troupe #1692 has produced many successful and hard-working students through their program, proving just how important and beneficial theatre education really is.

Director Thomas Mackey has witnessed first-hand some of the positive impacts that theatre has on student development and career readiness, as well as some of the rebuttals against those who dismiss theatre as just a fun activity.

“Those who pursue a career in theatre, or in any art, are often shamed for choosing a ‘frivolous’ or ‘unsustainable’ career,” Mackey said. “We want students to know that pursuing an arts career is just as fulfilling and sustainable as any other career. You know all those high-budget movies and TV shows you binged during the pandemic? Those were all created exclusively by artists, many of whom got their start doing high school theatre.”

“Theatre is the ultimate cross-curricular subject,” Mackey said. “Students who participate in theatre often see grade improvements in other subject areas, higher standardized test scores, improved communication and social skills, and the development of creative problem solving, time management, and other employable skills. Not every student who participates in high school theatre is going to pursue it as a career or even study it in college, but the skills they learn in theatre can be applied to any career and throughout their entire lives.”

Senior Kaitlin Bowens is the historian of Merrillville’s Thespian Troupe and has been participating in theatre since her freshman year.

“Theatre has helped me get out of my shell a lot,” Bowens said. “I was not this outgoing before joining the troupe and taking theatre classes. I’ve also gained some helpful time management skills because theatre can be like a full-time job on top of having classes and other extracurriculars; I really had to learn how to juggle it all and not burn out.”

Many Merrillville Thespians have a bright future in theatre to look forward to. Senior Jarius Newman received more than $50,000 in scholarship offers from different colleges across the country, and Senior Myia Dickerson was offered a full-ride scholarship to the University of Indianapolis. Junior Lauren Molenda was re-elected to represent Merrillville as an Indiana State Thespian Officer (STO) and is the first Merrillville STO to serve two terms.

“Our theatre program is one of the most recognized in the state,” said Mackey. “We are the only minority-majority program that competes at the regional & state competitions every year. We produce leaders and students who achieve beyond their years. Colleges are literally lining-up to recruit our students and give them scholarship money because they recognize the amount of talent our students have.”

Despite all of the great accomplishments Merrillville’s Theatre Department has achieved, much of the dedication and effort put in by these students is underappreciated and unrecognized. Mackey hopes that through the spread of theatre education advocacy, people will begin to support the arts at Merrillville, giving these performers the recognition they deserve.

“We have a wealth of talent and creativity within our student body, but our performances are scarcely attended and the hard work of our students goes unnoticed by most of the students and staff,” Mackey said. “It is regrettable that our program is more revered by those outside our community than within it. But anyone can help change that by supporting the theatre program through attending performances, promoting our productions, taking classes, auditioning for shows, or helping out backstage. The benefits are innumerable!”

Freshman Ember Wolstenholme does an outstanding job of portraying what a Merrillville Pirate truly is.

Wolstenholme is an honors student involved in the thespian troupe, band, and softball, and she is interested in studying artistic design and creative writing after high school. In her free time, she enjoys drawing or painting, exercising, playing video games, and watching WandaVision.

This past January, Wolstenholme participated in Thespian Nation Live, earning a superior ranking on her scenic design for the play “Animal Farm,” qualifying her to present her individual event at the International Thespian Festival this summer.

“I had to come up with my own scale drawing of a set, which is something I’d never done before,” Wolstenholme said. “The whole process of it was pretty cool and it was interesting to learn how to design my own set. I honestly didn’t think I would get a superior, especially because it’s my freshman year! I’m really glad I decided to participate.”

Wolstenholme is also in Merrillville’s Beginning Band class and participated in marching band this past fall. She has been playing the flute since sixth grade.

“I was really interested in playing an instrument since I was little,” Wolstenholme said. “I chose to play the flute because I just love the peaceful sound of it.”

Through the pandemic, Wolstenholme has continued to do school from home with virtual learning. Despite the challenges that come along with distance learning, she has persevered, maintaining a 4.2 GPA.

“Virtual learning has definitely been very different from in-person school because I don’t have the interactions with my friends and teachers that I normally would,” Wolstenholme said. “The good thing about it is that I get to work at my own pace, and I’m still earning my good grades.”

Wolstenholme’s dedication to her passions has not gone unnoticed.

“She's really eager to learn more about theatre, isn't afraid to take on a challenge, and works really hard to excel,” Mackey said.

Rachel Sonnenberg has always gone above and beyond as a teacher, creating so many strong bonds between her and her students while guiding them to success.

Sonnenberg has been teaching English at Merrillville for 15 years and is currently the head of the English department. When not at school, she enjoys spending time with her family, exploring new places, and solving puzzles.

Sonnenberg explains that her pathway to becoming a teacher was not a straight shot ahead, but rather a journey of self discovery.

“Well, I remember playing school as a kid,” Sonnenberg said. “I didn't play with Barbies, I played school instead. As a high school student, I wanted to be an accountant or in management of some kind. I took one accounting class in high school and thought, never mind that! I graduated early and took a full-time job in an office and quickly realized that working in my little cubicle was not what I ultimately wanted long-term. I then enrolled in Purdue with teaching as my major.”

Sonnenberg graduated from Purdue University Calumet in 2006, majoring in secondary English education and has been teaching at Merrillville ever since.

“I completed my student teaching here with Mr. Brian Past and never left,” Sonnenberg said. “I have never taught at another school; this is it. I was placed here and chose not to leave.”

Sonnenberg has continuously gone out of her way to support her students not only in the classroom, but through extracurricular activities as well.

“Early in my career, my husband and I would attend lots of athletic events,” Sonnenberg said. “Football games, basketball, wrestling…and I truly enjoyed those times. I coached academic decathlon for many years and have fond memories of attending the state competition with our team. Honestly, I have great memories of all the kids and teachers I have worked with.”

Throughout the years, hundreds of students have thrived under Sonnenberg’s instruction, but she too has learned a lesson or two from her kids.

“I value how students learn, what is relevant to learn, and the ways all students learn,” Sonnenberg said. “That as a frame of mind has led me to be patient, be flexible, and be understanding as a teacher and as an individual. As an early teacher, I would get worried and stressed if I didn't teach ‘well enough.’ But the longer I worked, I came to realize just to ask the students. They will tell me if something didn’t work, and I will listen to them and figure out another way to teach a lesson. I still live by that theory. Things aren't perfect, and it's okay. We just try again and again, growing with each other. That lesson has made me a better person.”