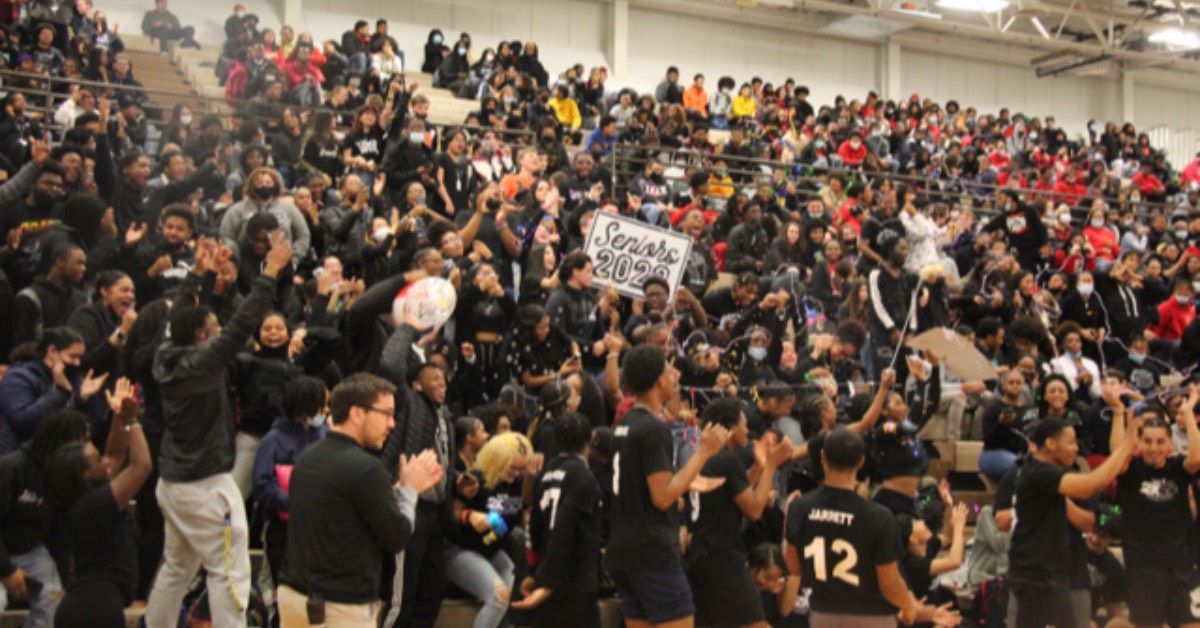 With the Merrillville High School (MHS) school year soon coming to a close, the senior class of 2022 had one of their final festivities. Covid-19 had caused many senior classes over the last three years to have many events canceled, so students were eager to have school tradition events back after many years. The student vs. staff basketball game radiated school spirit and lively energy as students cheered and were ready to kick off their spring break.

The game took place during school hours and each class was able to wear their class colors to show school spirit in the stands. Several MHS faculty – including Bo Patton, David Pritt and Branden Wesby – competed against the senior team which consisted of Tina Higgins, Jaiden Almaraz, and many more.

The seniors and faculty had gone through weeks of preparation to compete against each other. The first and second quarter were close calls with layups and three-point shots that landed perfectly off the net. By the time half time approached, the score was 22-29 with the staff in the lead. The MHS poms dance team performed during intermission causing the crowd to roar with applause.

Senior awards also took place during halftime, having many winners for categories of best actress, cutest couple, most athletic, best side hustle, and others. The Class of ‘22 was filled with gleaming smiles and laughs while creating one of their final core memories as an MHS pirate.

Once the game resumed, the seniors and staff continued to play hard having multiple scores off the back-board and playing a tight defense. Michael Miranda was one of the leading scorers for the Class of ‘22, but Bo Patton steered the faculty to a winning game. The ending score was 58-50. Although the seniors may not have one the game as they intended, they did enjoy themselves and created a memory they will never forget.

MHS poms dance team will be holding try-outs for the 2022-23 school year on April 20, 2022 from 3:45 to 6 p.m. Students must have an athletic physical on file to the athletic department to be allowed to try out, and there will be no exceptions. Students who are rising freshman through rising seniors are welcome to try-out.

MHS poms dance team is excited to see students come out and give it their all on the dance floor. The dance team will be performing during the football and basketball season for the 2022-23 school year. The dance team does allow you to express yourself in an artistic way while showing pirate pride.

Hannah Gaffney’s classroom is not only filled with the aroma of spices while having food labs but also with caring positivity felt by her students. While many students can’t picture her in anything but a classroom, it was not the first career path she intended on pursuing.

“I actually was originally planning on becoming a nurse,” Gaffney said. “I started out pre-nursing when I went into college, then after my freshman year I became a CNA and worked as a home health care CNA during the summer. I realized that it was going to be too stressful for me because I didn't realize how hard it was for me to see others suffering so much physically. Thankfully when I went to college, my dad made me think of a backup plan in case I wanted to change my mind, so I knew that I would switch to studying to become a Family and Consumer Sciences teacher. I literally switched my major the week before classes started for my sophomore year – it was stressful for sure!”

This decision quickly paid off allowing her to currently teach multiple classes at MHS including nutrition and wellness, housing and interior design, and adult roles and responsibilities.

Gaffney wants students to be able to come to her no matter the circumstance and be a support system for her students. She has been able to form ongoing connections with students and grow professionally during her years at MHS.

“I have loved my time at Merrillville seriously, I'm not just saying that!” Gaffeny said. “This is my third year here at MHS, but my fourth year teaching, I taught in Colorado before. I feel really blessed to have spent the last three years here, except for what COVID took from us. I have never smiled and laughed so much because of my students; they have made this job mean everything to me.”

Working with students every day in such hands-on classes has allowed valuable moments to be created in the classroom.

“One of my favorite memories was during my first year here and my Housing & Interior Design class took a field trip to IKEA early in 2020,” Gaffeny said. “We just had so much fun on that trip between the bus ride, searching through IKEA, and going out to eat. I feel like it forever bonded us as a class!”

Phillip Roche, a junior at MHS, has been receiving multiple offers from a variety of division I colleges. Even with the football season being on pause during the winter and spring season, this has not stopped Roche from continuing to strive to be the best.

“During the start of the off season, I like to watch films and figure out things I need to improve on,” Roche said. “I then follow that up by working on those things and it usually includes anything from coverage, speed, strength, or pure agility. During this time it’s important I work injury prevention to make sure my body sustains the season. During the summer, I make sure I condition as I get closer to the season.”

Being a full-time athlete who does constant training is not always easy, but Roche manages to handle obstacles thrown his way with ease.

“A tough part about being an athlete in my sport is how fast the game moves,” Roche said. “You can’t truly rest there’s always people working hard to get to where you are. If you doubt yourself for a minute, you're losing half the battle; plus, on social media you might come across people who seem better than you, but you can't control that. Focusing on bettering myself and my team helps me deal with that tremendously.”

The feeling of gratitude is one that Roche has become familiar with taking on his athletic journey.

“The feeling of being offered from multiple colleges is surreal. These are things I used to dream of as a kid now having it happen is a great feeling. I'm truly blessed," said Roche.

Roche hopes to teach the generations after him about not only the importance of training physically, but also changing their mentality to tackle challenges.

I want to inspire the younger players to see that there’s more out there, and all they have to do is be patient and work for it,” Roche said.