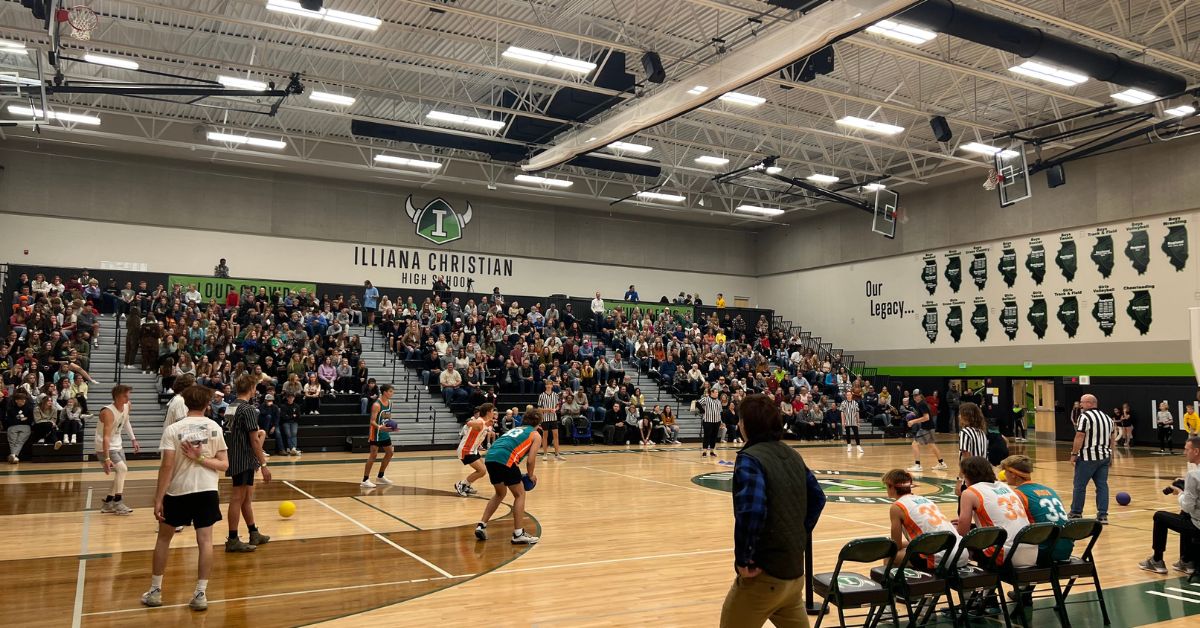 Illiana Christian has had an exciting start to fall in October. Illiana’s leaders have begun moving forward with phase two of the school's building project, which entails 22 million dollars of additions to the school which includes, but is not limited to: additional classrooms, bathrooms, and an auditorium.

The school also threw its annual spire party, which is an event hosted by Illiana yearbook (or “spire”) staff, that debuted last year’s spire, and allowed 2021-2022 alumnus, along with current students  to come, pick up their yearbook, and maybe even have it signed by a few old friends.

Illiana hosted its annual dodgeball tournament on the 14th, which allowed six people per team  from all grade levels to dress up in costume, and fight to make it to the final round. There is also a prize for best costume. The first praise crowd breakfast of the year, which is put together by the praise crowd committee, occurred on the 13th, and the first praise crowd, which is a worship service for Illiana students and their families, happened after dodgeball. The Sadies Hawkins dance took place on Saturday the 15th, from 7pm-10pm. At ten dollars a ticket, this dance was a way for the student council to help raise money for organizations in need. The seniors left for their class trip on the 18th, which happened over fall break, and lasted four days. This trip is a loved tradition by many, with so many opportunities to experience DC, and visit places like the Spy museum, Lincoln memorial, and even “The tomb of the unknown soldier”.

Illiana has a full schedule of events  for the month of November. The fall production of The Father of the Bride will take place on November 3rd through the 5th. Illiana is also having its annual auction on the 12th of November, the auction requires all Fall sports players including cheerleaders, wrestlers, and basketball players, to help out with the event in various ways. Veterans day at Illiana is also coming up. The Illiana student body starts its day in a chapel with veterans, and includes breakfast for the veterans, as well as the folding on the flag by students. The Illiana Missions club announced the trip destinations at Illiana’s annual dodgeball tournament.  The missions trips will take place during the spring break of 2023, and the summer of 2023. They have decided to return back to Los Angeles, and West Virginia. They have also decided to bring back international missions trips, by going to Ireland and the Dominican Republic. After having to stay in the country due to COVID concerns, they are now allowed to travel outside of the country.

Grace Jania is a senior, who has spent all four years at Illiana. Jania has always planned to attend Illiana, she attended a feeder school, and witnessed her older brother of two years go to Illiana. She has been involved in many Illiana extracurricular activities, such as the fall play, Clue, during her freshman year, being a S.H.I.E.L.D group leader during her junior and senior year, being on the varsity cheerleading team all four years of high school, and being on the the school newspaper staff three years in which she was a reporter, News editor, and finally Editor and Chief. Jania spoke about her experience at Illiana, and what makes it stand out as a school by saying, “ the community [differentiates Illiana from other schools]. There is no other high school in the area that fully captures Illiana’s school spirit and unity, especially when it comes to participating in activities, such as Praise Crowd and Loud Crowd.

Kuipers speaks about how Christ has played a crucial role in the way he teaches by saying, “ Christ is central to my teaching. I am challenged to do my best every day and therefore expect the same from my students. It is essential to use our gifts and talents in service, as stewards, and in our striving to make this World better for all of God's people.”He also mentions how the Farm, which is a portable farm outside of Illiana that grows plants, and other produce for Illiana, has been such one of his favorite parts of of teaching recently. He and one of the other Science teachers, Mr. Sylverster, have been working on it for almost two years. He says, “The farm would be hard to top [in terms of what I like working on the best]. It is a great addition to the school. I enjoyed the struggle with Mr. Sylvester in getting both the farm and Ag-science course established.