Lake Central High School is very hard to miss. It is a big brick building in the middle of one of Indiana’s busiest roads: Indianapolis Blvd. Now that construction is finally completed, a student body of over 3,000 is ready to create memories that will forever be remembered.

Although construction has ended, this is just the beginning of a new chapter for LC. Newly implemented this school year is a “traditional” bell schedule. The name is ironic, because there is nothing traditional about it. After the preceding “matrix” schedule resulted in hundreds of students being frequently signed out of school, administration felt it was time for a change and decided to go with a bell schedule they found was working at other facilities.

On Mondays and Thursdays--which are known as “Blue” days--students visit periods 1-4. On Tuesdays and Fridays--“White” days--students visit period 5-7, but there is a twist to their day. On these days, students attend period 5, then proceed to their “resource” class which is used for college preparation as well as time to catch up on school work. After resource, students then go to periods 5 and 6. Wednesdays are when the schedule becomes more complicated. The class periods follow the order of 1, 2, 5, 6, 3, 4, 7, with each class being 49 minutes long as opposed to the normal block day 90-minute classes.

Another new addition for this school year is the corporation’s very first Public Relations Internship. Nine juniors and seniors whose applications were accepted for the program are each assigned a school in the Lake Central School Corporation and are to report the happenings inside the school to local news outlets. The corporation hopes this will be a good way to shine light on the positives of the schools, as opposed to the rather negative news--or lack of news entirely--that has seemed to cast a shadow over Lake Central.

With so much controversy in the nation, whether it is because of the election, or from subjects such as Colin Kaepernick, teenagers throughout the nation may feel like their opinions are not being heard. That is also the case at Lake Central. With such a large school, there are many diversing opinions and that has resulted in a new club being formed. 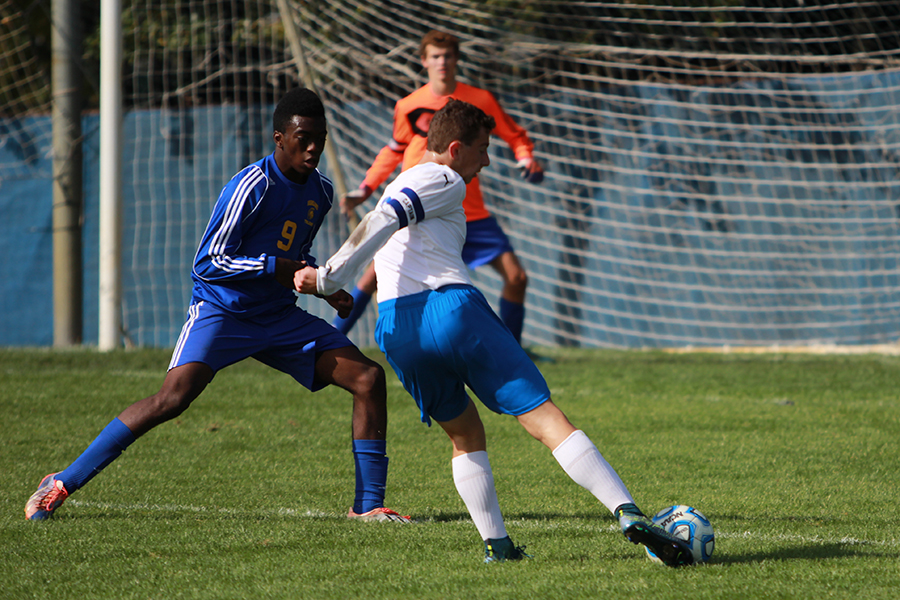 “Young Americans” is a club run by seniors Ana Zanza and Hannah Sarkey in which students meet on Fridays every 2-3 weeks. The purpose of the club is for students with all kinds of opinions to get together and discuss topics in which their thoughts would normally get shrugged aside. After meeting for the first time on Friday, September 9, it appears that the 20+ students that attended were happy with the result and Zanza and Sarkey hope that the attendance will only grow. With every club, though, there must be rules. For this club, the rules are simple: no crying, no fighting, and you must respect the opinions of others. The goal is not to make everyone decide on one opinion. The goal is to see thoughts of other students and to build your own opinion off of what others have to say.

One source of excitement within the school going into September and October is the predicted success of the varsity boys soccer team. After recently being rated the number one team in the state, the team is looking to build off of their strong Semi-State run last year. The team may not be getting as much attention from students as the football team normally does, but that is not stopping them from getting the support of the community and from playing for something they have long hoped for.

With the end of the regular season for football nearing, Dollars for Scholars is preparing their second annual Semi-Formal Homecoming dance. The Homecoming football game will be held on September 30, and the dance will be on the following day, October 1. The dance is held in the main office foyer which is designed to hold a few hundred students.

Although the school may not have gotten the turn out they had the potential for last year, it was still a step from the previous year, which included no dance at all. From the whispers throughout the halls it appears that good words are being spread about the dance, and round two looks to be full of positive expectations.

Thanks to the construction of a brand new auditorium which was opened to use last year, administration was able to hold meetings with each class for the first time ever. Each class met for a different purpose, but in the end the main goal was to establish expectations, and to prepare students for college and beyond. In other news regarding the auditorium, Lake Central Theatre has begun their preparation for their fall play, “James and the Giant Peach.” After a spectacular show last year, Disney’s The Little Mermaid, the sky is the limit for what is to come this fall.