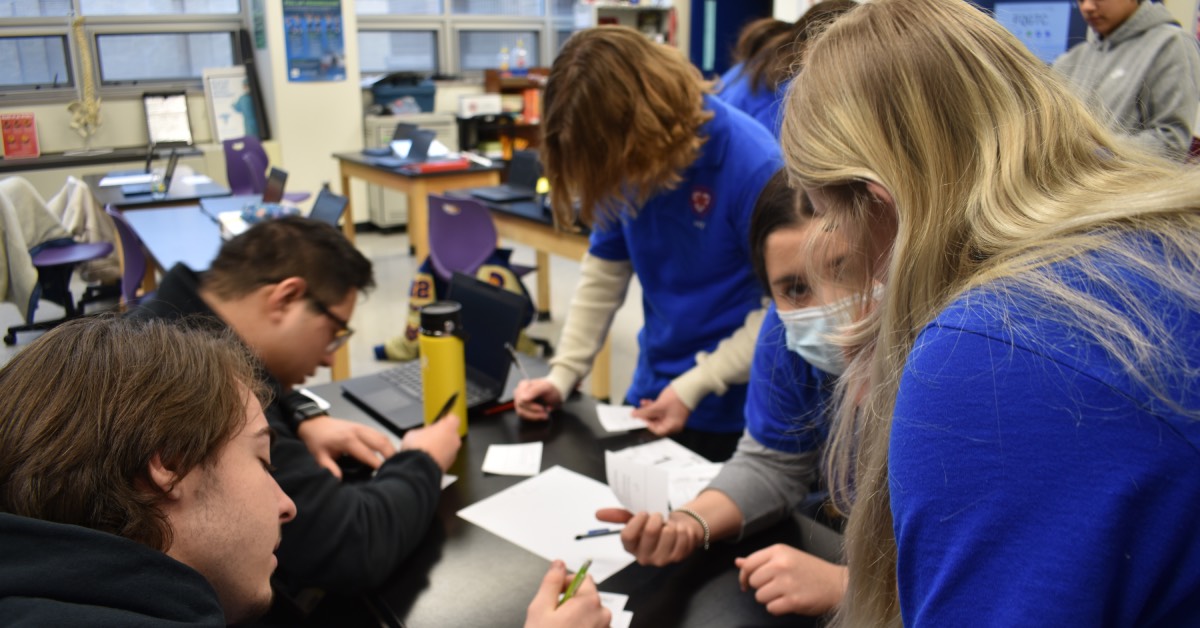 The Computer Information Technology (CIT) class at the Hammond Area Career Center (ACC) is small, but mighty. Having only a handful of first-year students and a singular second-year student, the class works hard in every aspect.

Along with receiving these qualifications, students also get credit for six high school credits. Students learn the history of computers and trends in addition to hands-on learning with computers and the different kinds of equipment. Second-year students learn more in depth about networking and web development. Like most classes at the ACC, only juniors and seniors can take this class.

With all the technical knowledge the students gain in this class, students are able to apply the skills they have learned outside of the classroom. Students learn multiple troubleshooting strategies to fix basic computer issues people see on a daily basis. This allows the students to apply their knowledge in real-life situations and not depend on learning in the classroom setting alone. Students have the opportunity to work together on projects and use their creative aspects to work on individual projects that peak their interest. Students learn from field expert and business owner, Enrique Catalan.

The Emergency Medical Service (EMS) class is working hard for their huge, end-of-the-year project. The EMS class is teaming up with other Health Science pathways and the Cosmetology program to put together a mock disaster event at the end of the year.

The last time the classes had the opportunity to do this project was in 2019 prior to the pandemic. The EMS teacher, Ryan Cogdill, is excited to have the opportunity to bring this back after a long, two-year stretch. The EMS class got an idea of what to expect during a small scale triage project earlier this week.

Students worked in small teams at different stations to assess mock patients as to where they needed to be treated. Just like any real-life situation, some patients were dead on arrival (DOA). Students were expected to assess patients ranging from eight to 70 years old and decide what hospital they went to. Students were expected to accurately assess if they could save a patient or not as well as decide what kind of hospital would treat them to the best ability. Some hospitals were like your average emergency room and some hospitals were specialized in different kinds of care.

Enrique Catalan is the CIT teacher at the ACC. Catalan began his teaching journey at the ACC just five years ago. He enjoys inspiring the new generation of computer techs in his classroom.

“Seeing the students here eager to get into the industry, that is what makes me proud," Catalan said.

Prior to becoming a teacher at the ACC, Catalan was in the computer information field and even started his own company. The business, IT Manage, manages IT for small businesses. Thankfully for this class, not much has changed since before the pandemic.

“We have physical labs and virtual labs, the pandemic did not hurt us that much like other industries. The fact that we can transfer a lot of the hands-on labs into virtual labs makes things pretty easy,” Catalan said.

Catalan hopes that as time goes on, the students stick with the industry.

“I think the hard part for them is just getting started in the industry.” Catalan said. “Once you’re there it is not that hard. You just have to know the fundamentals, be motivated, and get out there.”

Ernesto Torres is a senior at Whiting High School and the only second-year student in the CIT program. Torres has had an interest in technology and seeing this class was offered at the ACC peaked his interest. Torres was never much of a gamer or computer person until the CIT class gave him a new perspective. His favorite part is the hands-on aspect of the program.

“I like being able to troubleshoot anything. There is always a variety of things going on in class and it changes on a daily basis. The variety is something that I like,” Torres said.

Being able to apply the knowledge he learns inside the class is something Torres utilizes regularly in his personal life. As we start to come to the final stretch of the school year, Torres reflects on some of his favorite things that he has learned thus far.

“Picking a favorite thing that I have learned is tough,” Torres said. “So far, I really enjoy networking. Learning how to make networks is something really cool.”

After completion of this class, Torres plans on getting his degree at Purdue University and working in a data center.