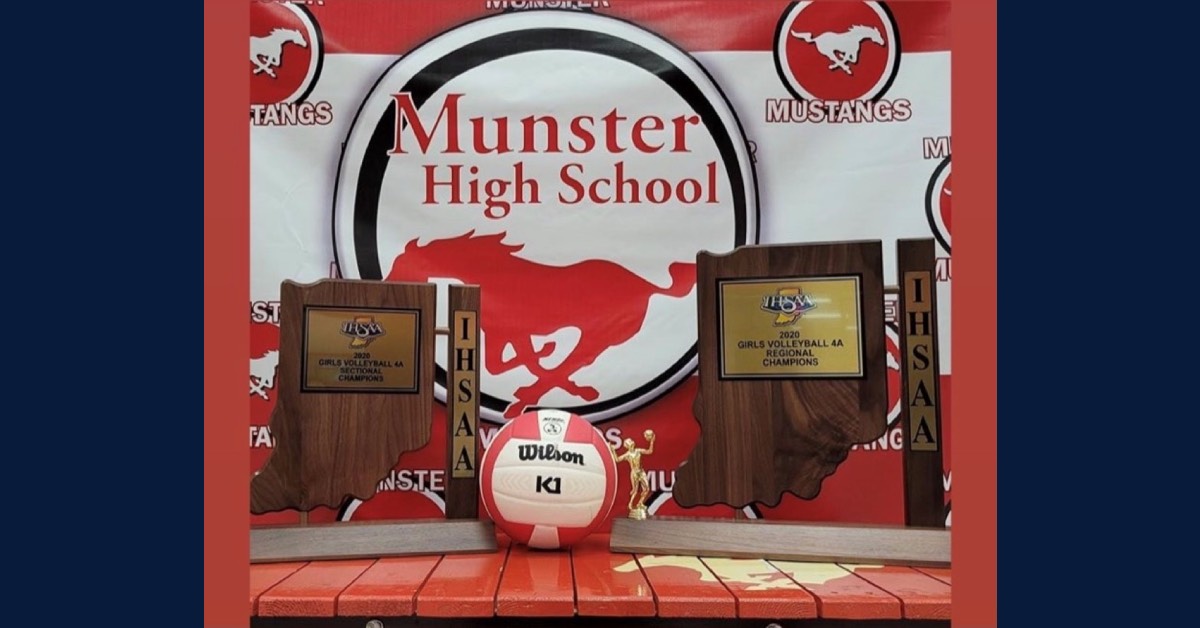 Along with the school’s elections was an exciting spirit week. Although the Mustangs were not able to host a homecoming dance, the homecoming excitement was still felt as students participated in fun theme days. A schoolwide favorite is the ‘80s workout day, where seniors go above and beyond to wear the brightest colored workout gear.

As the first quarter came to an end, students and teachers scrambled to ensure all assignments were accounted for, and were thankful to have finished the first quarter of the school year strong. Not only was Munster fortunate enough to have the option to be in-person, but fall sports were also able to continue their seasons. Student athletes participating in these sports did not take their chance to play for granted as the Mustangs displayed tremendous victories this season.

Zoe Bailey is a junior at Munster High School and is currently involved in track & field and girls’ basketball. Bailey competes in the one-hundred-meter dash and high jumper, while her basketball season began with her playing forward on the junior varsity team. As the season progressed, Bailey showed tremendous improvements and was elevated to the varsity level for the basketball team.

When asked who her favorite athlete was, Bailey named Serena Williams.

“Even though I don’t play tennis, I have always admired her hard work and determination, and her success has inspired me to do my best in sports,” she said.

Although she loves competing in track & field, her favorite is basketball: “I love the energy basketball season brings and the family that comes from basketball.”

Along with her love for sports, her passion for academics goes back to when she attended St. Thomas More for middle school. That passion has continued throughout high school as she ranked English as her number one subject thanks to her love of reading. Her favorite teacher is Benjamin Boruff because he manages to teach and instill excitement into the classroom all at the same time.

Furthermore, Bailey is a representation of many young successful student athletes at Munster High School who are excelling in the classroom and on the field or court!

Ms. Leigh Ann Westland is currently an English teacher at Munster High School. She began her career as an educator in an Illinois school district in 1992, then came to Munster in 1995. Her passion for helping others has drawn her to the teaching path.

“I appreciate all the students I meet each year, and want to be a positive part of their high school experience, whether that be in or out of the classroom,” she said.

Westland’s love for helping others not only lead her to become a teacher, but also motivated her to encourage hundreds of students to volunteer. This is made possible as she is the sponsor of Project X, a volunteering club at Munster High School. Not only does the club help improve the community through volunteering, but it is also the largest club in the school, proving how effective Westland is with sharing her passion of helping her students and community.

Along with teaching and being an advocate for volunteering, Westland loves staying active. She completed two marathons for charity events with Opportunity Enterprises in Valparaiso and The Cystic Fibrosis Foundation. Westland is an outstanding representation of the dedicated teachers at Munster High School who care for their students and the community.

The month of October has been an outstanding month for Mustang sports as they have won many titles for the school. In particular, the Boys’ Tennis Team won the Sectional and Regional Championships and will be heading to semi-state in search of the state title. Along with the Boys’ Tennis Team, the Boys’ Soccer Team defeated Lake Central in the Sectional Championship Game, and the Girls’ Volleyball Team became Sectional Champions after defeating Merrillville and Highland. The girls then went on to become Regional Champions after conquering La Porte and Crown Point and are now preparing for semi-state. Last but certainly not least, many members on the Boys’ and Girls’ Cross Country Teams have competed in semi-state and are advancing to the state meet. Moreover, the Munster High School Band had their first virtual concert on October 17, which was extremely successful.

During the week of October 26, the Mustangs will be having a mock presidential election, which is hosted by the Civics Club. This election will allow students to get a taste of what voting is like, which will ideally encourage them to vote when they are of age.

On October 29, virtual learners will be coming to school to take the PSAT, while in-person learners will be at home. However, seniors will be having a “Discovery Day,” where they will participate in college-ready activities to ensure they are on the correct path for their futures.