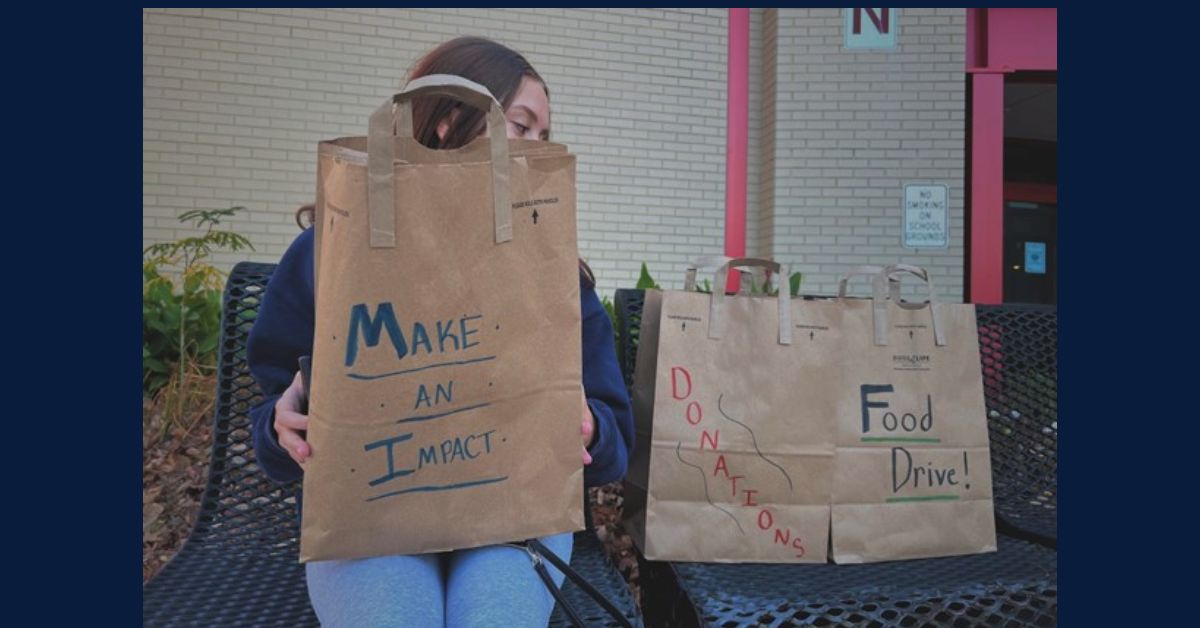 Lending a helping hand for this upcoming holiday season, Munster High School’s (MHS) Student Government started their annual Food Drive on November 1, and it will continue until November 17.

“My favorite part about the Food Drive is collecting the cans towards the end of the event,” Ini Edet, junior, said. “While it is definitely difficult to collect hundreds of cans and haul them around the school, it is encouraging to see everyone participating and making an impact for our community.”

To encourage students to donate, there is a competition between first-hour classes to collect the most items. The highest collecting class will receive donuts. All items donated will be brought to the Greater Hammond Food Pantry.

Finishing off its competition season, the band came in 10th place at its State competition on November 5. The competition was held at Lucas Oil Stadium.

“Going to State is by far the best part of the marching season,” Emma Burk, junior, said. “Performing at the Lucas Oil Stadium is such an amazing experience. Although our band did not score as well as we were hoping, I believe that we had the best performance of our show that we’ve had all season.”

“With this being my first year on the team, I am looking forward to all the meets and being with all the girls on the team,” Bailey Sechowski, freshman, said. “I hope the team strives to make it to Regionals and State.”

The Mental Health Club is going to Indianapolis on November 13 to attend the Indiana Bring Change to Mind (BC2M) Student Summit. BC2M is a student-established club that invites members from mental health clubs across Indiana to hear from mental health advocates, participate in workshops, and even destress by visiting some therapy puppies.

Normally, the MHS Mental Health Club meets every other Wednesday, where the group creates various crafts and stress relieving activities.

“I like the atmosphere of the Mental Health Club,” Chloe Reynolds, junior, said. “Everyone there is just really nice.”

Making an effort to get to know his students, Ben Boruff starts off each of his classes by asking his students a simple question:  “How are you all doing today?” Although a simple gesture, he wants to ensure that he reaches out and makes a connection to each and every one of his students everyday.

“For all of these clubs, I have some sort of personal connection to them,” Boruff said. “I love film, I’m a big advocate for what GSA does in high schools and beyond, mental health is a big passion of mine, and I like playing DND. Beyond that personal connection, I think it just helps me to get to know students on a different level, and that helps me be a better teacher.”

Simon Nirenberg, junior, has conquered staying involved whilst being on top of his academics with his extreme organizational skills.

“My most challenging class by far is AP Composition,” Nirenberg said. “The amount of writing in the class can become somewhat burdensome for me, especially since I tend to default to being a bit of a perfectionist. The way I have come to deal with this is by waking up very early to write for an hour or so with a clear mind every day. This is sometimes very difficult to do, but it usually gets the job done nicely.”

“Clubs and activities are such an amazing way to express oneself and build connections outside of school,” Nirenberg said. “I have had some of the best experiences of my life and made some of my best friendships through my extracurriculars. The atmosphere at school activities is wonderful because, for the most part, everyone is there because they actually want to be, not because they have to. It changes the whole dynamic and creates a motivational and fun atmosphere.”

Outside of school, Nirenberg studies 30 minutes every day for the US National Chemistry Olympiad, he is the president of the Jewish Federation of Northwest Indiana’s youth group, and he is a High School Legacy Ambassador for the Munster Junior Historical Society. Some of his personal activities include playing the piano, running sprints around his neighborhood every day, and creating Youtube videos of piano covers to his favorite songs.

With his very busy life, Nirenberg explained his intricate system to keep his schedule organized.

“I mainly use the Google suite for my organization because I like having everything in the cloud and accessible from anywhere anytime,” Nirenberg said. “I use Google Calendar for scheduling and Google Tasks for most day-to-day tasks and reminders. For larger goals, I make individual documents which I organize into specific to-do lists, goals, and deadlines. In order to keep all my long-term plans accessible and organized, I keep a single long document where I keep links to all my other plan documents: my school agenda, and daily reminders for good mental health practices.”