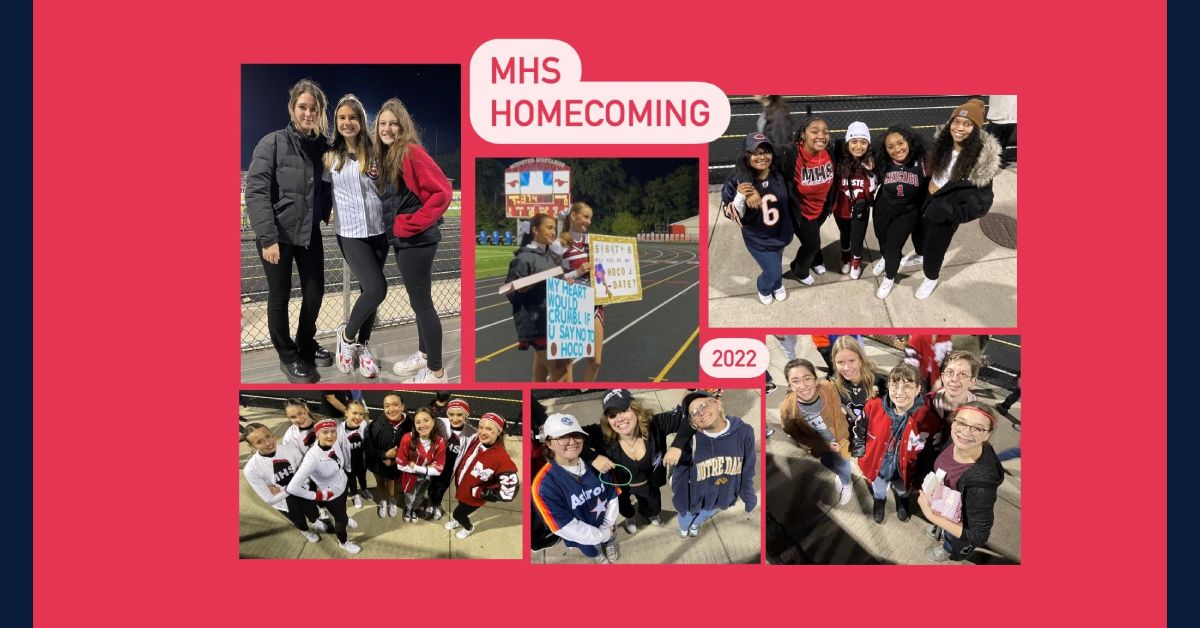 Transitioning from last year’s Homecoming that took place in the school parking lot, Munster High School (MHS) just held their first Homecoming since COVID-19. Over 1000 students attended the dance on October 1. Freshmen members of the Class Executive Council (CEC) decorated the commons with posters and balloons to get students in the homecoming spirit.

“Decorating the commons was definitely a process, but my friends and I had so much fun,” freshmen Katherine Vitale said. “I love supporting the football, dance, and cheer teams by painting and creating the posters.”

The Homecoming football game against Andrean High School was filled with many exciting moments despite the loss. The Homecoming court lined up beside the field during halftime awaiting the announcement of the Homecoming Queen. Senior Gracie Kisala was overjoyed to hear her name announced.

“The moment I heard my name, it took me a second to process it. I couldn’t believe it,” Kisala said. “The first thing I did was run off the field to go hug my best friend, Meagan.”

Another highlight of the night was the dance team halftime performance. It is an annual tradition for both JV and Varsity dance team members to come together and perform a large routine filled with fun moves and skills.

“It’s so fun to dance as a whole dance program,” varsity dancer and junior Adeline West said. “The stands are more packed than usual so it can be nerve-wracking, but it is a lot of fun to be recognized by the school and to feel the excitement of homecoming.”

Celebrating their title as the first place grand champion at the October 8 Downers Grove South High School competition, the MHS marching band prepares for their state regionals. The state regionals will be on October 15 in Lafayette, IN.

“We hope to keep pushing ourselves and each other to be the best we can be for our upcoming regionals,” junior Emma Kavalec said. “Individually, I feel confident that we will be successful and make it to semi-state.”

The MHS orchestra students are preparing for their first concert of the school year on October 19.

“I really like all of the pieces that we are going to be performing, they have a really good fall vibe to them,” junior Lauren Hoogeveen said. “It’s also our new orchestra teacher’s first concert with us, so that is exciting.”

The MHS choir students are also getting ready for their first concert, which will be on October 12. The most advanced chorus group to be performing, the MHS Chorale, is excited to make their debut.

“I am so grateful to be a part of the Chorale this year. We have been rehearsing diligently to perfect our songs.” junior Addison Dzurovcik said. “I am very eager to see how we perform at our first concert.”

All MHS choir students have a once-in-a-lifetime opportunity to go to Austria next June to perform in the 2023 Salzburg Choral Festival. The choirs have already begun raising money for the trip, with the next fundraiser, “Coffee House and Open Mic Night,” taking place at the Munster Community Park Social Center on October 21.

Senior Elliott Mckeever stays busy and involved with MHS’s musical opportunities. He is currently a part of the MHS Chorale as a section leader for the tenors. He is also the drum major of the band, which conducts the band during their performances. Mckeever joined his first choir, a children’s church choir, around the age of 10. He followed his family’s footsteps by joining the band in sixth grade.

“Music has always been a part of my life in some form,” Mckeever said. “I had always enjoyed playing instruments and singing from a very young age, and I did it all the time.”

Mckeever mainly plays the alto and baritone saxophones, but he explained that the other two types, the soprano and tenor saxophones, are so similar that over time he became familiar with all the four types. He is currently learning how to play the piano, flute, and ukulele.

“In the future, I plan to learn how to play even more instruments,” Mckeever said. “Two instruments I would like to start learning next are the oboe and the theremin.”

After high school, Mckeever plans to study Selling and Sales Management with a minor in Music and another in American Sign Language. He does not plan to completely focus on music in college, but he hopes to audition for a university choir or glee club.

“Even though I am not making music my main focus of study, I will absolutely keep it a part of my college life,” Mckeever said. “I plan to seek new opportunities that will arise to share music with others.”

“In the fall of 2019 Valpo University placed me here at MHS and I loved it,” McGinnis said. “It was like getting handed the keys to a Corvette and as long as I didn’t crash it, I was gonna be fine.”

McGinnis finished up his fourth year of college in January 2020. He was able to acquire a music teaching job, but when he heard that Robinson left MHS, he applied.

“What I really liked about Munster is that there was lots of camaraderie,” McGinnis said. “It just seemed that this was the place to be. Students were very engaged and it was, and still is, a very supportive community.”

McGinnis’ love for music sparked in first grade. One of his classmates was the “Star of the Week” and chose to play guitar in front of the class while their dad sang “Yellow Submarine.”

McGinnis was inspired by this performance, so he went out and learned to play guitar. It was not until his sophomore year in high school that he joined choir. It was his experience in choir that drove him to wanting to pursue music in his future life.

“I initially wanted to be an engineer or an architect, but I ended up realizing that I just didn’t like doing math all day,” McGinnis said. “I really enjoyed working with my individual music teachers and my lesson teachers, so I just thought about how I could do something like that.”