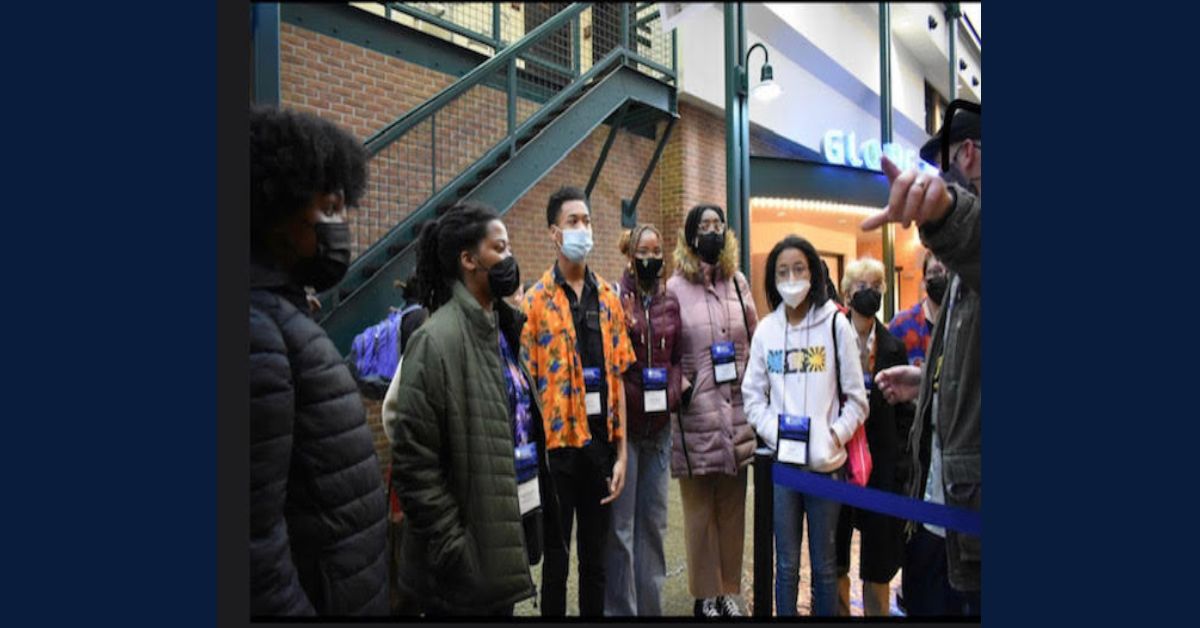 Merrillville high school (MHS) has a variety of clubs and extracurriculars that many students can be a part of. The Thespian Troupe is one club that students who are interested in theater can be a part of that allows them to express their creativity and learn different aspects of how plays are produced. Thespian Troupe recently was able to go to a state conference and compete for different awards such as most outstanding actor, costume design, sound design, and many more.

Lauren Molenda, a senior, joined the club in seventh grade and has continued it throughout all four years of high school. Molenda has been able to not only have multiple roles in the plays of The Ash Girl, Little Shop of Horrors, Rose and the Rime, and more. Her personality and dedication to the troupe was her motivation.

“At the 2022 Indiana State Conference back in January, I was awarded the 2021-2022 Distinguished Senior award,” Molenda said. “Dozens of schools from across the state attend this conference, and each director has the opportunity to nominate one senior from their troupe that has been a successful mentor figure in their program. Winning this award out of all other senior Thespians across Indiana is something that I’m so grateful for, but the most special part to me is that it came from my director, Mr. Mackey.”

Thomas Mackey, the sponsor of Thespian Troupe, manages to form connections and step into the role as a mentor when it comes to working with the students in his club. He encourages students to take on many different roles behind the scenes and in front of the audience that allows them to grow and create many memories along the way.

“I always feel a sense of pride when my students are successful,” Mackey said. “Not only because they receive recognition from colleges and working professionals about the level of their talents, but also because we’re the only minority-majority school in the state that competes, so the Thespians continually break the mold of what theater in Indiana looks like.”

Merci Tan was noticed by many colleges and recieved scholarships. This was a greater outcome from the trip than she expected.

“I got awarded the scholarships by participating in the college scholarship auditions that took place at the Thespian State Conference,” Tan said. “Each person auditioning had to go into the room with a small stage to perform two contrasting monologs in front of around 15 colleges representatives.”

Precious Moore expanded her roles at the 2022 state conference by earning the position of the Indiana State Thespian Officer (STO). The position required a much more rigorous approach to leadership.

“I was really nervous, and that’s when it happened,” Moore said. “They announced my name. I screamed and I jumped up so fast, I can’t remember what I was thinking, but I do remember high-fiving my friends and telling myself not to run in case I fell. When I finally made it to the stage, I was really happy to see Lauren standing there. She inspired me to apply to be STO. I was incredibly lucky to have her as a guide and as a friend.”

Cam Chavez, a member of the Thespian Troupe, tackled two leadership roles and placed excellent in costume design at the state conference. Chavez has been able to gain many networking opportunities through theater.

“Theater has opened up a world full of inviting, creative people and opportunities that I am extremely excited to be a part of,” Chavez said. “ I’ve made connections with individuals in the professional theater world as well as joined a community where I can grow off of people like me. It's extremely enriching and I’m grateful to have found my spot within this community.”

MHS Boys Baseball began hosting baseball camps for first graders through eighth graders to spread an interest for the sport. The baseball camps are led by the junior varsity (JV) and varsity (V) athletes, and the lessons teach participants new drills and skills. Younger students who register are able to learn how to get better at the sport and make new friends in the process.

“The camp is led by Coach Buxton, and he is assisted by me (assistant coach, Ryan Sosnowski), coach Traina, Coach Chrisler, and Coach Hamilton,” Sosnowski said. “The coaching staff sits down the week before and plans everything we are going to accomplish. Once we create this schedule, we show the student-athletes what we would like to do and have them help us implement it. We then put the student-athletes at a station, and have them lead that situation while the coaches assist. This process is successful, because we all work as a team.”

Connor Buxton, one of the coaches and camp director, reflects a positive attitude during training with younger athletes. After little league baseball programs stopped a couple of years ago, maintaining an interest in baseball has been a challenge among younger athletes.

“It’s just trying to build the program and get more people in the community interested in baseball,” Buxton said. “I think it's good for our guys (JV and V athletes) to see that and to be a part of that process.”

Colin Rogers, a senior on the baseball team, is optimistic that the program will create a safe environment and build additional strengths in future athletes. Rogers hopes that the youth baseball programs will continue to thrive even after he graduates.

“Since Little League is no longer a program, it definitely has affected baseball in Merrillville,” Rogers said. "Hopefully these camps will help kids get back in the sport and get better so by the time they get into high school they have the knowledge to actually compete against all the other schools.”

Julian Medina, a player entering his last season, has been helping assist on drills and fundamentals practiced at the camp with his teammates.

“Teamwork and leadership was shown in the camp and from all teammates that came to help with the camp,” Medina said. “From teaching the kids how to stretch, to teaching them how to throw a baseball correctly, the team was able to cooperate with the groups and help correct their mistakes.”

Colin Early, a junior on the team, wants the camp to motivate more kids to play baseball and hopes to be a valuable asset when coaching. Early aims to provide realistic insight into what typical drills are practiced during high school baseball.

Joshua Magallon, a sophomore on the varsity team, feels the camp will create milestone moments for the kids going to the camp and will allow them to explore what sports they are interested in.

“We had the second graders and they were all just being happy, giggling, and laughing the whole time,”  Magallon said. “They were really enjoying it. They actually liked doing it, it wasn’t something they were forced to do.”

Kristin Maglish assists the athletes at MHS with rehabilitation in the fitness center. She also works with adults in the Merrillville community to create fitness programs that make sure everyone is safe and healthy. Maglish works with athletes to get them back to their active lifestyle in a safe manner.

“People don’t realize that the main thing with this job is to make sure that the kids are safe,” Maglish said. “Make sure they (the athletes) are down here (the fitness center) safe, and they are doing the machines correctly.”

Maglish is often known by students as the "mother of athletes," being there for athletes when they are physically injured or need a shoulder to lean on.

“I think my favorite thing over my 20 plus years of working with students is the relationships I’ve developed with kids,” Maglish said. “Even now to this day I’m still in contact with kids from 20 something years ago.”

“I love Merrillville,” Maglish said. “I love our kids. Over the years I've been able to be part of a lot of diversity and I’ve learned a lot from the kids.”

“It’s definitely kind of hard transitioning from teammate and sister to coach and sister,” Briana Thomas said. “When I come to the gym we have to realize that she is a gymnast to me, not my sister, so I can’t speak to her in any type of way or baby her. Of course, I’m going to want to push her to the fullest because I know what she can achieve, but I have to sit back and realize that she’s a gymnast. I have to treat her like everyone else in the gym.”

Emilee Thomas feels that her role as a gymnast has expanded with her sister guiding her along the way. She has been training and building her strength and confidence throughout pre-season to take on the mat this season, and wouldn’t choose anyone else to go through it with her.

“Having my sister as a coach is actually really cool,” Emilee Thomas said. “I feel like it's brought us closer together, and I always know she’ll be there in my corner supporting me and helping me through whatever I want to do.”

Briana Thomas had to learn how to transition from an athlete's mindset to a coaching mindset.

“Transitioning from being a teammate to being a coach has really opened my eyes to the other side of competing,” Briana said. “ There's a lot of things that go on behind the scenes between the coaches meeting, building the routines, making sure everyone has what they need, their mats and everything. It’s honestly a better viewpoint of it because competing I know what the gymnasts need, so I feel like I can be a better coach to them.”