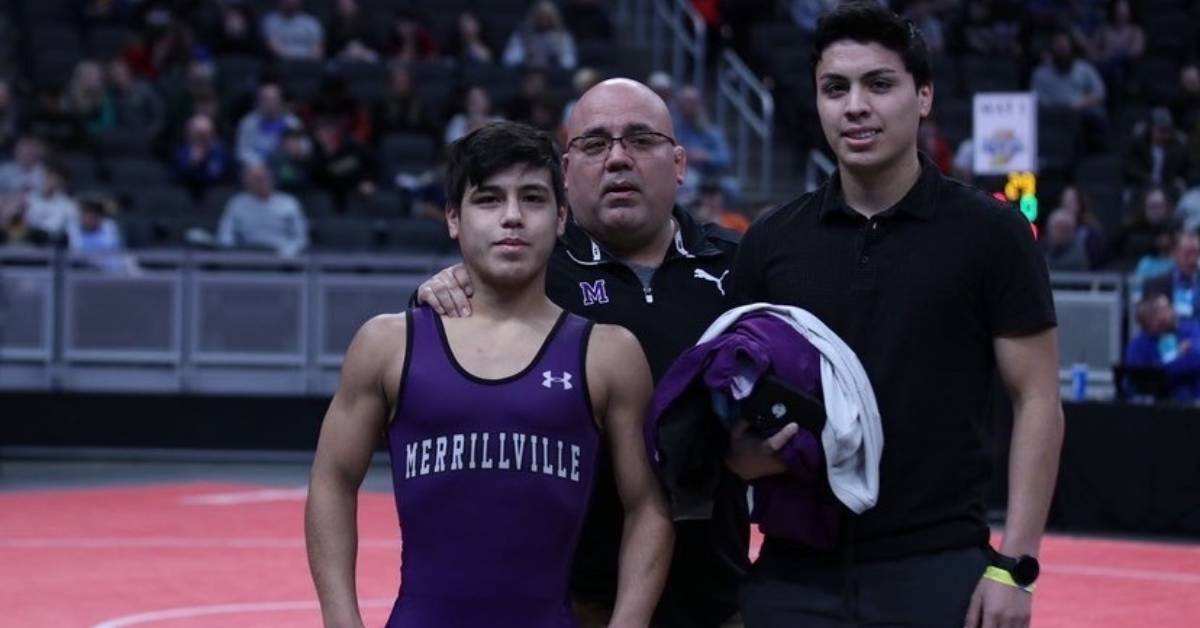 Merrillville High School (MHS) wrestling team ended their season on a high note having several athletes compete at sectionals, regionals, and continuing their athletic journey at the state level. Multiple members of the team contributed the success of this season to be a heart-warming feeling that also taught skills useful off the mat.

“I feel like I gained more discipline work wise,” Senior Ruben Padilla said. “I definitely pushed myself to my limits and found out that I can keep going when it gets tough. I would say I learned a lot of good things from the guys and the coaches with just putting in the work everyday.”

“I think that in regionals our kids performed well, fought through matches, and they handled adversity pretty well,” Maldonado said. “I think it set us up for the semi-state. We had a great first round at the semi-state having nine guys  with the possibility of going to state in that second round. I think we were in a good place if I had to pin-point a part of the season; I think that was the point I was like, 'Okay, we’re good.'”

“That first match on Friday night was like a feeling I’ve never felt before,” Maldonado said. “It truly was such a mix of emotions. You do everything in your power to prepare as best as possible, but I don’t know if anything could simulate being on the mat at that stadium.”

Senior Theodore Sparks, even after competing as a wrestler for multiple years, still faces the excitement when entering a match.

“I feel nervous,” Sparks said. “It gets really intense. When I’m on the mat, the only thing I can focus on is trying to make and finish a move on the other guy and trying to sneak in points when I can. And if it feels right going for a pin; it’s just a feeling of intense focus. It's a tingling feeling, but as soon as the whistle blows, it all dies down. I just have to focus.”

Senior Caleb Carter, after wrapping up his last season of wrestling, can reflect on the impact that the sport has had on his life outside the wrestling room.

“I feel like I’ve grown from freshman year to senior year with my mentality,” Carter said. “Coming into freshman year, I was immature and I didn’t want to work, but coming into senior year, I came in and put in the work. I just wanted to get better.”

Sophomore James Veal is eager for the endless possibilities of being able to continue forward with his athletic career.

“I want to be a part of a winning DAC (Duneland Athletic Conference) team, work hard, and help my other teammates get better in the weight room and in the wrestling room,” Veal said.

After having to cancel prom due to the COVID-19 pandemic, MHS is now able to have prom for this year's class of 2022 and 2023. The official date and time was recently announced for this school year.

MHS prom will take place on May 6, 2022 and will take place at the Avalon Manor. The event starts promptly at 6:15 and goes until 11 p.m., with the crowning ceremony taking place at approximately 6:30 p.m.

The dance is open for seniors and juniors to attend, and they are welcome to  bring a sophomore to accompany them to the event. No freshman or guests above the age of 20 are permitted to attend. The tickets are $35 and an additional $10 for late fee if prom application is submitted after spring break.

MHS is anticipating a large turn out and is still planning to follow COVID-19 safety precautions. Prom sponsors are excited to give students their first dance since the pandemic started.

Neerja Prasad is often remembered by students as always having a smile and spreading positive energy to students that even just passed by her classroom. Prasad teaches biomedical sciences, medical terminology, and taught a few years of human body systems. She encourages students to push themselves while taking these challenging courses.

“My favorite classroom activities are those where my students master a challenging task and are visibly proud of themselves,” Prasad said.

Prasad’s students often describe her class as being one they are thankful and happy they had the opportunity to take. She makes this experience between her and her students a mutual one.

“I feel very lucky to teach the students I have,” Prasad said. “They are respectful and genuinely kind. They are willing to be challenged, and they clearly want to learn.

Her class is one she genuinely enjoys being able to teach and loves the experience she is able to have with students within her classroom.

“Some of the students in my class were taking human development at the same time,” Prasad said. “They had to bring their flour babies to each class. On a day when we were doing a lab, they set all their babies in a "safe" corner of the room and decided to put lab goggles on them. It made for a cute and hilarious picture.”

Junior Monica Valladares takes on a variety of extra-curriculars including soccer, National Honor Society, Spanish club, orchestra, and volunteering for the Volunteer Income Tax Assistance (VITA) program. She takes on the phrase to be a “busy bee” with time-management skills and has fun taking on each challenge head-on.

“I usually set up a schedule at the beginning of the week because it’s a lot to keep track of,” Valladares said. “I plan my days out accordingly with meetings, homework, tests, and anything else that needs to be done. I’ve always believed that it takes hard work to get where you want to be. It gets difficult at times to manage everything, but I try to look at it in a positive manner and find happiness in my work. A large part of it is keeping this mindset and knowing that every little task is contributing to the bigger picture.”

While she is a part of many activities she definitely has her favorites.

“I love playing soccer and participating in Spanish club,” Valladares said. “I’ve been playing soccer since I was 10, and since then it’s been my escape to have fun and make connections with my teammates. In the Spanish club, we all work together and are dedicated to bringing culture into the school, and we do it while having a great time. It makes me proud that I have a part in this influence and am keeping my heritage traditions alive in places other than home.”

Valladares continues to expand her education beyond the walls of MHS. She plans to pursue a career in business/finance hoping to own her own business in the future. She does hope that the next generation of students at MHS takes education seriously and forms routines while also having fun.

“I would definitely encourage younger students to stay consistent or build up their work ethic before high school,” Valladares said. “Most of the reason I was able to keep up with my grades is because I was already accustomed to getting my work done as soon as possible instead of putting it off until the last minute. This has benefited me so much because doing the work really does help you learn and getting it done is a greater feeling than having to stress about it while putting it off.”