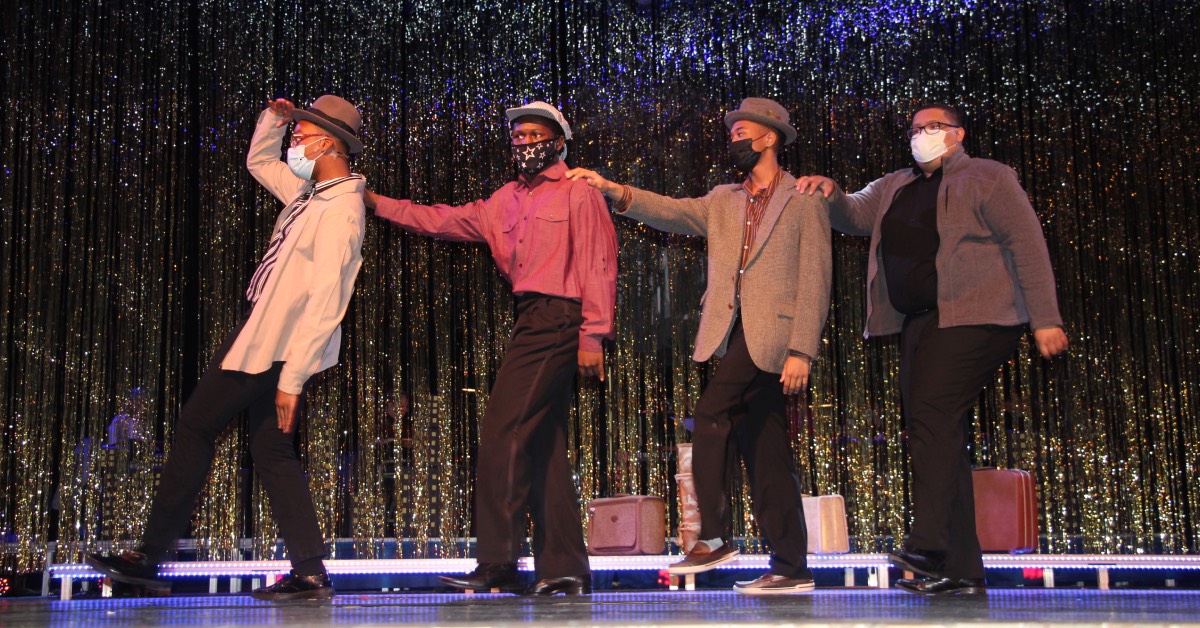 The Merrillville High School (MHS) Performing Arts Department is back with another production, presenting Leiber and Stoller’s classic, Smokey Joe’s Cafe as their 2021 spring musical.

After the unpredictability of their last production due to COVID-19, the cast is glad to be performing once again and has embraced this opportunity with open arms.

“When I first found out we were, in fact, having the musical, l was really glad to know that I would have a senior year show,” Cast Member Leah Mallon said. “I have been in every production here since my freshman year and didn’t want my last year to slip away.”

Smokey Joe’s Cafe is not in the format of a typical musical, but is rather a showcase of music and dance portrayed fully through song with no dialogue. Rather than having one cohesive plot that develops throughout the show, each musical number serves as its own vignette, telling the stories of distinctive characters with different styles in each piece.

“Personally, I radiate more towards the acting portion of shows, so when I found out Smokey Joe’s is entirely music, I was a little overwhelmed and scared,” Mallon said. “I was really happy to hear about all of the dance and choreography involved but it’s really new to me, and for a lot of us, to be in a musical without any specific character roles, scripts, and acting through dialogue, it’s all an adventure!”

Director Melinda Reinhart took many factors into consideration when selecting this year’s production,and she ultimately decided that Smokey Joe’s was the perfect fit for her cast and their audience.

“I was looking for something that would have a wide appeal and that played to the strengths of my students, and this show definitely does both of those things,” Reinhart said. “A lot of the music that we listen to today originated from the crossover between rhythm, blues, jazz, and rock ‘n’ roll that this show incorporates. The musical harmonies, the choreography, and the overall outline of the show work in our favor, and it’s uniqueness draws in an audience!”

This year, the rehearsal process has been extremely student-driven with the directors taking a step back and letting their cast expand their abilities in leadership and artistry.

“I feel really proud of this show because of how much us students have stepped-up this year,” Senior Cast Member Jarius Taylor-Newman said. “In the past, we’ve been given the freedom to get creative and make things more unique to us and our characters, but we were still so used to being directed with dance numbers and blocking that were already thought out in advance. This year allowed us to not rely so much on that given direction and gave us more freedom to do what we envisioned for the show and to run with it.”

For the past two months, the cast has been rehearsing for nearly four hours, five days a week after school in order to perfect their craft in time for opening night.

“The rehearsal process has been really fun, and filled with a lot of self discovery for us all,” Taylor-Newman said. “With this show, there is always something to do, so the rehearsals actually go by fairly quickly. We work really hard and it definitely is tiring, but it will all be worth it in the end when the show comes together as a whole and we get to show off at our performances.”

The dedication and commitment that the cast has put into their production has not gone unnoticed as the directors have seen each student make tremendous personal progress throughout the past two months.

“We have seen so much growth in our performers in preparing for this show,” Reinhart said. “One of our freshmen, Terry Thomas, has done productions with us before, but this is his first time being in a high school production at our level and with a major role. He went from not even being in choir class in person due to COVID-19 at the beginning of the year to suddenly having to adapt and take on a major role in a full-length show. He grew up a lot in a very short amount of time in terms of skills, and that was definitely due to the mentoring he received from the upperclassmen.”

Even seniors like Mallon have discovered new talents and taken on new challenges that demonstrate their versatility.

“One of my favorite parts of the show is in ‘Spanish Harlem,’ where Terry (Thomas) sings a solo and I come in and do a lyrical number behind him, and we have a romantic little moment in there through some of the interpretive choreography incorporated into the song,” Mallon said. “It’s almost majestic and somewhat whimsical, and it’s a first for me because I’ve never had my own dance solo before. It’s been an adventure discovering the different things I can do with my body and trying something new for me.”

Thankfully, the performers have had a somewhat normal production process, despite the unpredictability of the COVID-19 pandemic.

“We are rehearsing masked and socially-distanced,” Reinhart said. “With having such a small cast and only a few people on stage at a time, it’s easier to spread out. Backstage, everyone has their own space for their props and costume changes and things like that, and there is hand sanitizer and cleansing wipes nearly everywhere you look.”

The directors are also ensuring the safety of their audience by spreading all parties six feet apart in the auditorium and continuing to follow CDC guidelines in the lobby and concession stand as well.

“Indiana’s COVID-19 numbers are still continuing to rise, so we’re just hoping to get through our full two weekends of shows and keep everyone safe while doing so,” Reinhart said.

“I think people should come and see the show because it’ll be a really enjoyable experience for everyone in the audience,” Newman said. “We’ve gone a whole year without in-person theater, and coming to see a show is like an escape from all of the craziness going on in the world, even if it is only for an hour or two.”

“Music is our heritage,” Reinhart said. “Music is that universal language that defies gender, race, sexual orientation, and other stereotypes and brings people together. It’s a celebration of the human spirit. The music in Smokey Joe’s Cafe is a combination of so many different styles and genres that has served as the ‘grandparent’ of the music of today’s world. Everyone will find something in this show that clings to them and it won’t let them sit still!.”