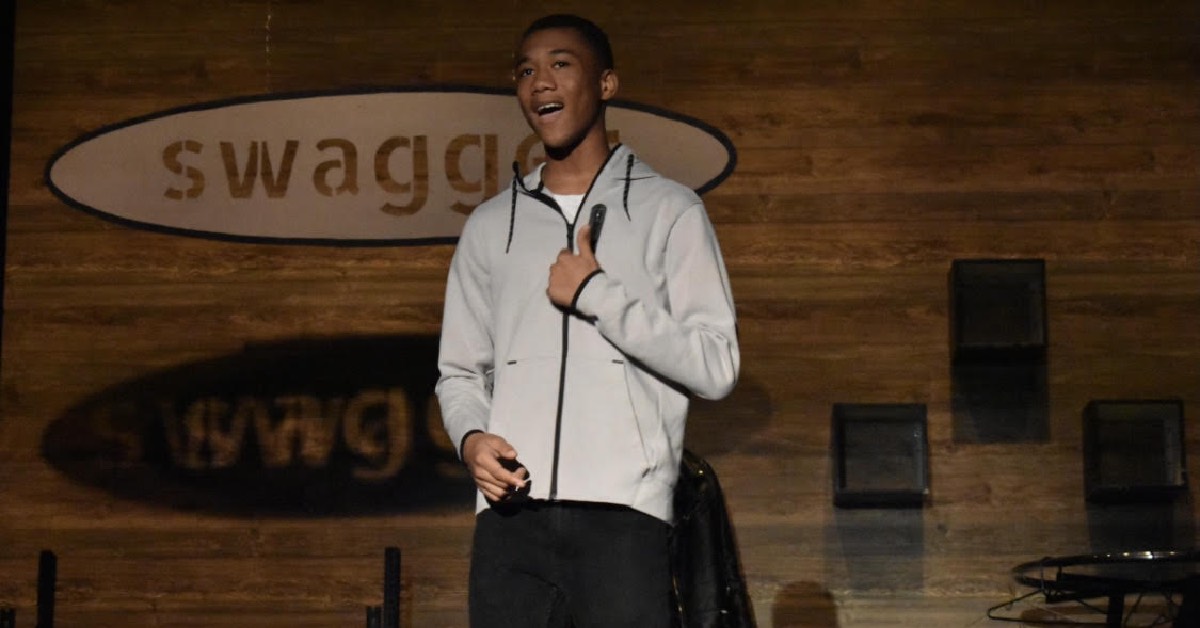 At the end of October, Merrillville High School’s Thespian Troupe #1692 virtually performed “Swagger,” a short play by Eric Coble that tells the story of three people whose lives are forever changed due to an act of violence caught on camera. No one knows who is at fault, but throughout the show the characters all get a chance to explain just how it all went down.

Normally, the fall play is a larger production with a 20-25 person cast, a longer rehearsal process, and much more set design. This year, Director Thomas Mackey chose a smaller scale show with three different casts, each consisting of three characters and one student director performing the show.

“Since there are only three characters in the play, having three casts is a way to get more students involved,” Mackey said. “But more importantly, the script indicates that the three roles can be played by people of any gender or race, so we mixed up the demographics of the three casts so the audience can watch the same events unfold multiple times with people who are identifiably different.”

Junior Merci Tan has performed in numerous shows since her freshman year. This time around, Tan, along with two other students, was given the opportunity to test her skills off stage by student directing. Overall, she is very pleased with the outcome of the production.

“I have to say it’s incredibly impressive to be able to put on a show like ours in one month’s time,” Tan said. “It requires lots of hard work and effort, and I can’t believe how well all three casts did just that.”

The influence of a great teacher can never be understated.

Wade Boise is a prime example of a great teacher as he goes out of his way to help his students grow, challenges them to understand complex material, and acts as a motivator to encourage them forward.

Boise attended Butler University, majoring in mathematics and secondary education. This will be his 22nd year teaching at Merrillville. In his free time, he likes to run, watch football, play his keyboard, and learn about history.

Boise said his inspiration to become a teacher came from his parents, both of whom were educators. Once he got into teaching, he knew it was where he was meant to be. He enjoys helping students reach their full potential, and he finds that he can learn just as much from his students as they learn from him.

One important lesson that Boise teaches is not exactly something you’d see on a math test, but rather a life lesson that has changed the way many of his students view their education.

“Over the past few years, I noticed that students could not handle failure to any degree,” Boise said. “The pressure to always be right or get the best grade has made learning mathematics about doing, not about thinking. Failure requires us to take responsibility. What if instead, we learned how to fail successfully? What if we learned that failure is what makes us better?” Boise said. “I want my students to not be afraid to try something new, difficult, or challenging.”

The Merrillville High School Guidance Office is scheduled to be renamed to honor the life of Michelle Sulich, who devoted 28 years of her life to helping thousands of students. She was seen as an educator, mentor, counselor, colleague, and most importantly, a friend.

Michelle Wilson, head of the guidance department, was able to see the effect Sulich had on students first hand.

“Throughout her tenure at MHS, she was always a huge fan of the students,” Wilson said. “Michelle did not have any biological children of her own, however she did have children, one could estimate in the thousands. She worked for every single student that came through the doors of MHS. She aided them anyway she could. She was there to lend a few dollars to anyone in need, give advice on which pathway to go, and even more importantly, lend an ear or shoulder to cry on. Today we remember what an amazing individual she was.”

The guidance department is planning a ceremony to formally present the new office. Wilson says they want to take the time to prepare the special event and accurately represent what Sulich meant to the students and staff at MHS.

“There will be social media posts as well as announcements on our school website to advertise the event. We will be cautious in consideration of the current COVID-19 pandemic and how the dedication will take place. Our hopes are to have the Michelle R. Sulich Guidance Counseling Office officially named prior to the start of summer school 2021.”

From his dedication in academics to his outstanding athletic record, Junior Zack Dunn flawlessly portrays what it means to be a Pirate.

Dunn is an award-winning runner for Merrillville’s Cross Country and Track Teams, as well as an honor student. When he’s not at practice, Dunn enjoys spending time with family and friends, drawing, and watching movies.

Dunn recently represented Merrillville at the IHSAA Boys’ Cross Country State Finals, being the first Pirate to qualify since 2010.

“Going to state has been my goal since freshman year. I don’t think people realize how much hard work and thousands of miles go into working toward these goals, so it feels great to know my past three years have really paid off.”

Dunn says that although he didn’t end the race with the results he was hoping for, he was still grateful to have the experience of being there and be the first runner from Merrillville to do so in a decade.

“To me, running is very symbolic of the way life is,” Dunn said. “There’s going to be times where it gets hard, when you want to give up. In the end, if you push through it you realize that you came out a better, stronger person than you were before. So running for me isn’t just moving my legs one in front of the other, it’s knowing that I overcame obstacles and became a better version of myself, and I can be proud of myself for that.”