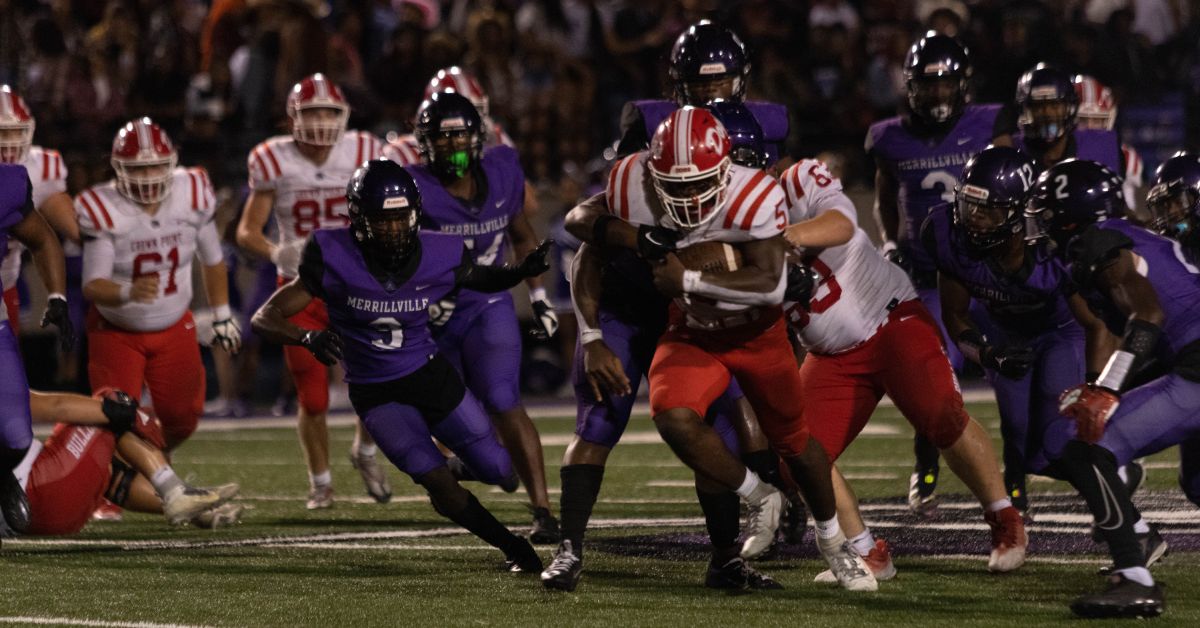 Merrillville High School (MHS) football team has kicked off the 2022 season with a strong start. Friday nights are often filled with a buzzing crowd, fans cheering, and a truly indescribable feeling for players.

“When I step on the field with another opponent on the other side, I am ready to compete at the highest level I can possibly compete at, whether it’s helping my teammate out or doing my own thing,” Student Kavon Wright said. “Going through the season, our offense is starting to crack down  and find our rights and wrongs but moving forward. It’s all about executing every play game by game.”

The MHS football team had to handle the change of becoming 5A after the drop in enrollment from the 2021-2022 school year. This change caused the team to go into the pre-season with a set goal in mind of hopefully bringing home the state title.

“This pre-season we worked on a lot, especially when it comes to eliminating distractions,” Senior Payton Young said. “With us dropping to 5A and being ranked pretty high, there have been a lot of people asking a lot of questions about the team, and we just try our best to focus as a team.”

While eager to embrace his role as a football captain, Phillip Roche wants to focus not only on team goals but also on personal goals to contribute to the team playing at full capacity.

“This year I hope to improve on being a leader,” Roche said. “ The past few years being the young guy in the room was easy. I'd just do what I’m told and follow the great leaders we had. Being the main voice in the room is definitely different, but it's the position I’m in. I hope to lead this team to the best of my ability.”

Roche is also relying on his team to be an unstoppable group of players.

“I’m counting on my team to play as one smart and physical unit throughout this season,” Roche said. “We look forward to our big rival games but we look at each team the same: we know we have to leave with a win.”

MHS is officially having its first homecoming since the pandemic began. Brooklyn Edwards, the senior class president, and the student government president have been hard at work to make homecoming possible.

The garden-themed homecoming dance will take place on Saturday October 1, 2022 and the location is soon to be announced. The dance will last from 7 p.m. to 10 p.m. Ticket prices are $25.

Edwards is excited to be able to give her senior class the homecoming they want.

“Personally, I am looking forward to homecoming since we haven't been able to host one since the recent COVID pandemic,” Edwards said. “Merrillville has not had a homecoming dance since 2019, so I do feel that people are excited to finally have one again.”

Along with the homecoming dance, spirit week themes have also been announced for the week of September 26-30. September 26 is Sunday best, September 27 is twin day, September 28 is wacky tacky, September 29 is throwback, and September 30 is Pirate Pride.

Senior Breonna Jordan is ready to start the homecoming festivities.

“I am looking forward to homecoming because it’s the best event at the beginning of the school year, and I always have a good time doing spirit week,” Jordan said. “Also, I always look forward to seeing everyone dress up for it.”

Edwards anticipates positive reactions from the student body as a result of the event.

“As Senior Class President and also being nominated for Homecoming Queen, I am excited,” Edwards said. “With the whole week being full and busy for all students with events such as spirit week, the pep rally, the parade, the football game, and the dance, so much fun is bound to happen. I am ready to see everyone come together and see the smiles on everyone’s faces.”

Sonja Pierson is one teacher at MHS whose name students often hear floating in the hallways and raved about in the cafeteria, having many students wanting to take her classes. Pierson, called Mrs. P. by students, is known to be a teacher and a support pillar all rolled into one.

Pierson had not always planned to teach, but after subbing, she couldn’t help but feel like MHS was where she belonged.

“After subbing, I realized how much I enjoyed being able to interact with the students and make a difference in their day-to-day lives,” Pierson said. “It is important to show students how the coursework can benefit them in their personal lives; especially those that may not be on a traditional schooling pathway.”

Pierson teaches a wide variety of subjects, and from the perspective of students, being able to just take one will have you wanting to come back. While students feel Pierson has positively impacted them, Pierson said they have also impacted her life.

“Students positively interact with me in the classroom, and it is one of the best feelings,” Pierson said. “I appreciate each and every one of them as they are respectful and make the days go by quickly. I truly enjoy all of my students and the interactions we have.”

While teaching may have chosen Pierson, she still loves the memories she creates.

“One of my favorite memories is bonding with my students and getting to know them all as individuals and not just a group of students for a certain class period,” Pierson said.

Former Andrean 59er turned MHS Pirate, Junior Trey Stephens has been handling the transition with grace and leaving a strong impression on the field.

“The transition was actually pretty smooth,” Stephens said. “ I knew a lot of people here prior to coming to the school. The classes I’m taking are going smoothly, and the atmosphere of the school was pretty welcoming.”

Stephens feels his talents and strengths will be important to making him a valuable asset to the team.

“I feel like with the talent I’ve been blessed with, I could help out big time by making big plays on the defensive side of the ball and the offensive side as well,” Stephens said.

Terrelle Elmore, Stephens’ teammate, feels Stephens will advance the team in the future.

“Trey came in and made an immediate impact for us offensively and defensively,” Elmore said. “He’s really talented on both sides, and shows it every game we play.”

Stephens, while strongly preparing during the offseason, does have his own goals he hopes to one day achieve.

“I hope to Become more of a vocal leader,” Stephens said. “I also hope to progress and get better and eventually help the team get to a state championship.”

Elmore feels Stephens has a notable quality that can be beneficial to the team.

“I’ve never seen Trey fold under adversity and, personally, that’s something I feel like the whole team should follow, including me,” Elmore said.