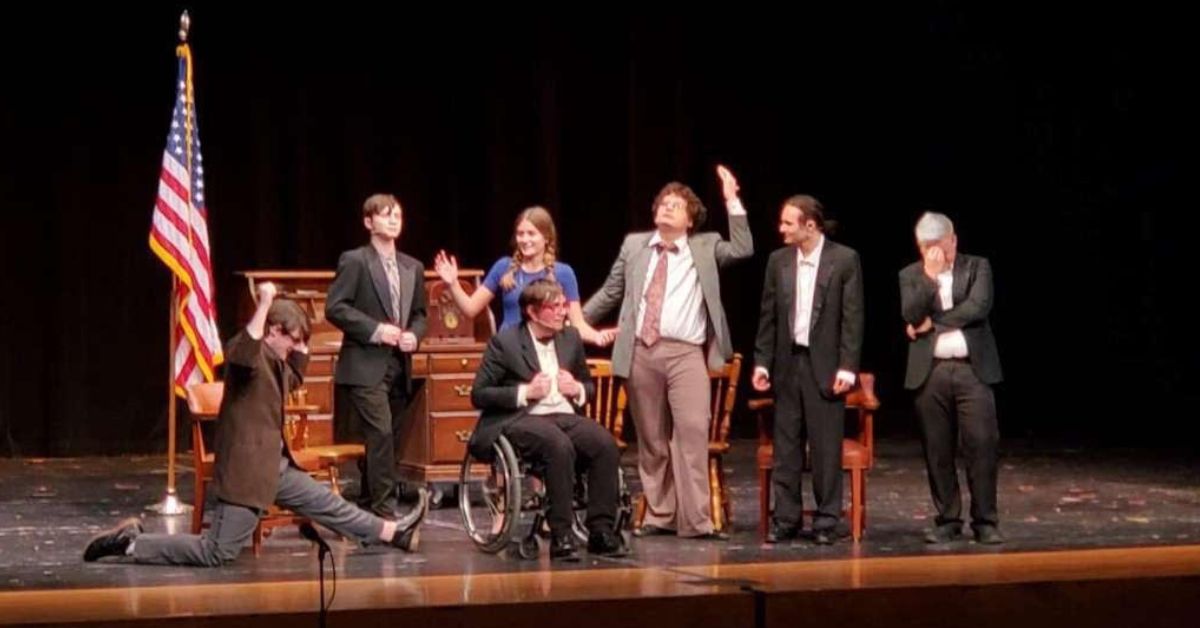 Lowell High School’s (LHS) parking lots were filled on the evenings between March 3 and 6. People flooded into the school for the theater department’s production of “Annie.” The production was done amazingly well and received a lot of positive buzz and feedback from the community. Out of four total shows, three were tickets away from selling out and the final show sold out completely.

The students who worked to put on the successful play spent the past nine weeks preparing for the four shows and let nothing slow them down. The casting for “Annie” was done well and was able to highlight the natural talents of the program. Those involved in the LHS theater program are passionate, motivated, and extremely talented students who amaze the town of Lowell every time they put on a new production.

“Annie is one of my favorite shows I’ve been a part of so far,” said LHS Junior Lily Devalk, who had a total of five roles in “Annie,” including Mrs. Greer and an announcer.

Devalk also touched on the ups and downs the program faced while preparing for the show. The week of opening night, the flu was making its rounds around the theater’s cast and crew. This led to some last minute changes, like cast members having to go on vocal rest or even lip sync their songs due to a sore throat while someone sang backstage.

Despite the sudden roadblock of the flu during the shows, “Annie” proved to go smoothly at each of the four showtimes and displayed that the performing students have extreme amounts of pride and initiative to put on the best show possible for their beloved town of Lowell.

As LHS enters the final grading period of the school year, Advanced Placement (AP) students are finishing up instruction and getting ready for the upcoming AP exams that will be taking place at the beginning of March.

The exams will be assessing students on the college-level material that they have been learning throughout the school year, and a passing score on the exam results in the student receiving college credits as a high schooler. Throughout the testing period, LHS will give AP exams in 14 different subjects. The first exam at LHS is AP chemistry on May 2 at 12 p.m., and the last test will be the AP physics exam at 12 p.m. on May 12.

There’s no doubt that the exams cause a lot of stress and fear for participating students. However, with the right amount of studying and taking the right steps towards preparation, the exams can be much less intimidating and weight can be lifted off of AP students’ shoulders.

For example, knowing the testing schedule, developing a thorough study plan, practicing AP material, setting up study sessions with teachers, and participating in practice exams are recommended ways by the College Board to successfully prepare students for the exams.

Good luck to the Lowell Red Devils that will be taking the Advanced Placement exams at the beginning of May. Teachers seem very confident in their student’s testing ability this school year, and know that they will do great.

LHS history teacher and boys tennis coach Dustin Hudak is often described as one of the most welcoming, understanding, and enjoyable staff members at LHS. From teaching college courses to emceeing the school’s pep sessions, Hudak seems to do it all with ease and major amounts of excitement and passion. He definitely shows those around him that he cares for every single one of his students and works towards making the best out of their time spent in his classroom.

Hudak was born and raised in Lowell and attended Tri-Creek schools. Having an upbringing in Lowell eventually led to this school year being his 11th year teaching and 15th year coaching at LHS.

“I am proud to be from Lowell, teach at Lowell, and coach at Lowell. There is no place I would rather live and work. LHS constantly strives for greatness and puts its students first and it is one of the best schools in our area. Red Devil Pride!” Hudak said.

Hudak always finds a way to get involved and make the high school a welcoming and exciting environment for students. He teaches U.S. History and Dual Credit U.S. History classes, which allow his students to earn college credits as high schoolers while saving time and money. He also runs the LHS student council and Environmental club, and dedicates most of his free time to the boys tennis team as the coach and even led his team to win sectionals in 2016.

“I have been coaching the boys tennis team for 15 years," said Hudak. "Many players come into my program without any tennis experience and watching my players develop their tennis abilities from their freshman year to senior year is impressive. Also, I played on the tennis team when I was in high school, and it is a dream come true for me to coach the program I once played for.”

Along with teaching, coaching, emceeing, and directing clubs, Hudak has gone as far as taking students on study trips overseas. He recalls the trips to Italy and Spain as one of the most memorable and impactful experiences he’s had throughout his entire time at Lowell.

“Seeing the smiles on my students' faces when they saw the Roman Coliseum, took a gondola ride on the waterways of Venice, or walked through the Plaza de Espana in Seville. It is something I will never forget. Through these trips, I am able to take these experiences back to the classroom,” Hudak said.

Students are constantly talking about their appreciation for Hudak and his passion for his students and the material he teaches. He goes above and beyond for his students and always makes a point to brighten everyone’s day. Whether it’s by checking in with students one-on-one or asking the class about their weekends, students prove to walk out of Hudak’s class in a better mood than when they entered it. Without his contagious positive personality, LHS would definitely not be the welcoming place it is.

Lowell High School junior Jaelyn Allen is a Red Devil who displays what it means to get involved and embrace presented opportunities during her high school years. She’s a multi-sport athlete who acknowledges that it is important to take the time to care and check in with her peers and teachers.

Allen is definitely a busy student during the school year. During the fall and summer months, you can find her on the golf course with the girls' varsity golf team. She’s been on the team since her freshman year, and has excelled on the green. In the winter season, she’s on the basketball court with the girls' basketball team.

Along with being a part of multiple athletic programs, Allen takes the time to be a part of the Red Devil Mentor Program (RDMP), which is a group of hand-selected student mentors. These students are positive role models who show leadership ability, teamwork, responsibility, and who stand out as someone with much to give toward the development of other students.

For Allen, being in the RDMP means meeting with her freshmen once a week during advisory, attending special summer training, assisting with freshmen orientation, and working during school days with special needs students and anyone within the school who needs a helping hand.

On top of effortlessly balancing two sports and being a mentor, Allen also has a significant role in the LHS choir program. She mentions that being a part of the program has been one of her most memorable experiences during her time at LHS.

“My most impactful memory at Lowell was when our former choir director asked me to be the president of the choir. It gave me a reason to want to come to school everyday and a bigger desire to do well in the class.” Allen said.

Allen said that her plans for the future consist of attending Indiana University and studying towards becoming an ultrasound technician. There is no doubt that she will be successful in the future with her ability and passion for getting involved and helping others.