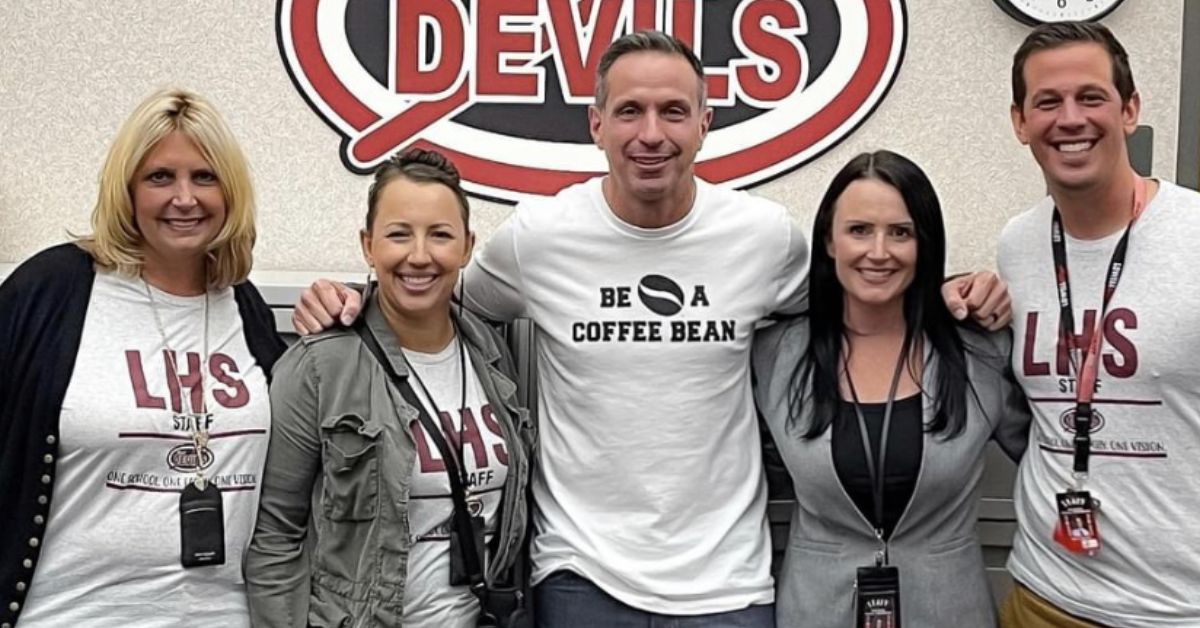 Lowell High School (LHS) welcomed guest speaker Damon West earlier this month, on September 7. With him, he brought the powerful message of the coffee bean to the whole school and community.

West was someone who seemingly had it all growing up. He was en route to having a professional football career and had a bright future ahead of him until he didn’t. After a career-ending injury and one too many bad decisions, his path was thrown incredibly off course. He became addicted to methamphetamine and became a part of a group that committed many burglaries. It wasn’t until 50 break-ins later that he was arrested by the police and sentenced to 65 years in prison, essentially a life sentence.

While in prison, West was confronted by a man that taught him the lesson that he now takes all around the country, and that LHS now gratefully observes. The man told him that life is like a pot of boiling water and each person decides how they’ll respond to the water. You can be like the carrot that turns soft, broken, and weak or the egg that turns hard, cruel, and mad, or you can be the third option, the coffee bean. The coffee bean changes the pot of warm water into a pot of coffee. Being a coffee bean means being the person that doesn’t let life change you, but that changes life.

Throughout his time in jail, West held onto this message of being a coffee bean. Living his life in accordance with the coffee bean lifestyle completely transformed West, and West transformed the prison. People saw this change and it led to him only serving seven years of a life sentence, which he did not take lightly, and is the reason he is now able to spread this motivational message.

West’s story and message about life is here to exemplify that you should never let hardships knock you down and to show that you are not the sum of your worst day.

Mike McLindon, the admirable teacher that made this keynote presentation possible, has been a big fan of West for some time now and says that he was inspired by his message. By bringing him for this presentation, McLindon had a hope for students to learn from West's presentation.

LHS is preparing for another lively homecoming dance this month, on September 24. This year, the student council chose the theme of “Masquerade,” which many people are looking forward to.

More specifically, when students buy a ticket, they will also be buying a white mask that the student council is encouraging everyone to decorate. On the night of the dance, the best decorated and most creative masks will receive prizes, which is a fun add-on to the traditional dance.

The homecoming dance is an event that brings together all the different groups of students. It’s also an opportunity for people to have an enjoyable time with their friends, and so everyone is encouraged to show up.

Overall, this year's theme has been very carefully planned and the dance is estimated to be a very successful night.

Mike McLindon has been a teacher at LHS for nine years and is widely known for his compassion and care for students. He is one of the teachers at LHS that students feel they can go to for advice and guidance. McLindon is an advocate for building relationships and connecting with his students, which is what makes him such a beloved teacher.

“My favorite part of teaching is the students. Each day brings something new, and I enjoy having the opportunity to share my love for the content. Another one of my favorite aspects of teaching is building relationships and finding a way to connect with each of my students. This is key to their success and watching students succeed is the most rewarding part of what I do,” said McLindon.

McLindon went to Indiana University Northwest in pursuit of a degree in physical therapy, initially discouraged to be a teacher due to the lack of competitive pay and respect for the teaching profession. However, he quickly realized that education was where he could make the most impact. His career began at Hebron Middle School teaching in the social studies department, but he later decided to switch to teaching high school students.

Currently, McLindon teaches the Peer Mentor, Government, and Dual Credit Government classes at LHS and is a phenomenal teacher.

As the head of the Red Devil Mentor Program (RDMP), he undoubtedly changes the lives of so many students every day. Not only does he change and save lives, but he also teaches his mentors how to do the same.

“I helped develop the mentor program at the school where I first taught, and I am grateful to have the opportunity to lead a successful program at Lowell High School now. Leading students and inspiring them to help others is my greatest professional accomplishment,” McLindon said.

McLindon encourages everybody he talks to be the best student and person they could be. He teaches his classes not only with concern for the content but also for how his students will feel and how they will learn. He ensures that every student in his classroom feels seen and heard.

In addition to his love for teaching and helping others, McLindon has a surplus of love for LHS.

“Having the opportunity to shape the culture at Lowell High School is exciting to me. I appreciate the level of support from the administration, faculty, and staff at LHS. Most of all, the students and community make LHS a great place to work. Lowell is a growing, thriving community, and where there is growth, there are exciting opportunities for continuous improvement,” said McLindon.

Leia Stanley is a junior at LHS who shows exceptional qualities both academically and otherwise. She has shown such great will and determination throughout her three years in high school that she will be graduating this year, which is an incredible achievement.

“Exceeding academically and meeting expectations to be able to finish my time here at Lowell High School at the end of my junior year will always be something I take pride in,” said Stanley.

What makes Stanley such an admirable student is her undeniable motivation and work ethic which have lit up the school for the past three years. She is incredibly driven, which is why she has already been so successful.

Not only has she done an excellent job with her schoolwork, but she has also been a part of the Red Devil Mentor Program since her sophomore year.

“Being a peer mentor is something that I am in my everyday life both in and out of school. The opportunities that I am given as a part of this program are life-changing,” Stanley said.

After high school, Stanley hopes to attend Valparaiso University to work towards a bachelor's degree in a medical program with the focus of obtaining her license to later become a pediatrician.

Stanley believes that LHS has taught her a multitude of things and has helped her grow both academically and as a person.

“The environment in all classrooms allows for growth as a young adult, rather than just focusing on an exceptional letter grade. I have gone through learning curves and hardships, but I am more than proud of where I stand today because of LHS. Peers, teachers, and administrators have better taught me how to be a leader throughout life and I could not be more grateful for that,” said Stanley.

LHS is proud to have contributed to such a great student's schooling experience.

“I am ecstatic to be a part of the graduating class of 2023 and to also enjoy the last year of my high school career,” Stanley said.