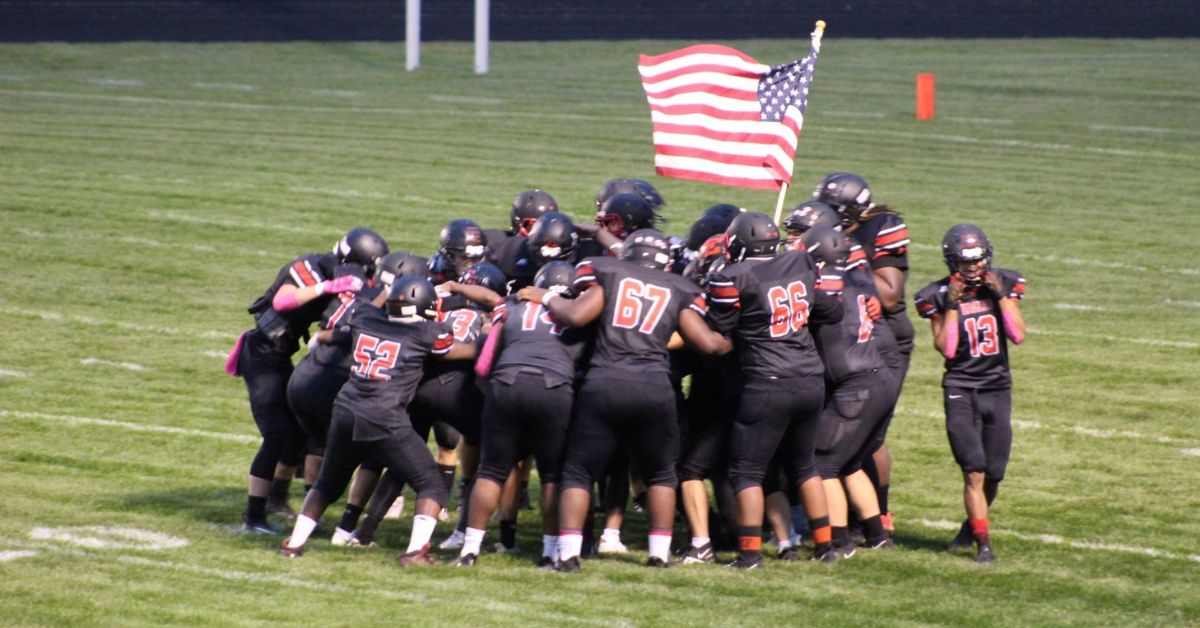 In the third quarter, Edison scored its last point with a touchdown that put the score to 20-19. With a one point lead, the team won its first home game of the season.

The team is starting off the season strong and hopes to end with a winning season. The team is working hard every practice to be able to play the best of its ability while on the field.

Edison’s V football team has brought a lot of school spirit to the community every Friday night.

On October 7, Edison will be having its homecoming football game against Boone Grove High School, following with Edison's homecoming dance the night after on October 8.

Edison will be having its senior night and last game of the season on October 7, where the school will also be announcing a homecoming queen and king.

All the seniors will be playing their last game that Friday, and it'll be a bittersweet moment for all the players.

On Friday September 2, the V football team will play away against its rivals at River Forest High School.

Brian Williams is the current assistant football coach for the Edison's V football team. Williams coaches Edison's football and wrestling team, and always wanted to coach since he played sports in high school.

Williams is a detective for the Lake Station police department and has been part of the community for years. He started coaching the same year he graduated in 1999, and has coached for Edison for over 20 years.

“I am proud to be part of this community and to be able to make an impact on the people around me, being able to make an impact on my athletes is why I love coaching," Williams said.  “My goal for this football season is to help coach this football team to their first winning season in a long time. I think we have the coaches and student athletes to make that happen."

Williams is a coach that athletes can look up to as he always pushes them to the best of their ability.   During every game you see the passion that Williams has for the game, always encouraging his athletes even on a mess up play.

“I always admired and respected my coaches and wanted to make an impact on students the way they did for me," he said. "I love seeing my athletes working together as a team on the field, seeing them give it their all makes me proud as a coach."

During Williams' coaching career at Edison, he has made an impact on many athletes.

Michael Brown is a senior who plays running back for Edison’s football team. Brown started playing football at the age of six for the Iron Eagles at Lake Station.

Brown expressed how he felt with this being his last year playing for the Eagles and explains how his love for the game will never come to an end.

“It’s been a long journey for me playing football, my last year I just want to show out for my team and school. I’ll do whatever I can to help us win," he said.

“I injured my right ACL/Meniscus during my sophomore year of football playing defense. I took a bad cut, and I just heard the pop," he said. "The recovery was rough. I hated the fact I couldn't finish my sophomore year or couldn't play my junior year. I had a major setback and had to recover and come out strong for my senior season.”

Despite Brown having to be out for two seasons of his high school career, he came back and scored a touchdown at the first home game of the season in the second quarter against Christian Crossroads.

“It was a 30-yard run. I had a good game, I had a few mistakes but those were just first game jitters, everyone has that," he said. "Our first touchdown we scored, I had a 25-yard run up the middle and got us into the one-yard line and we had our quarterback sneak up the middle. That got us back into the game; it was 7-7.”

On the field, Brown plays with heart and gives it his all. He has strong leadership skills and is prepared to play any position on the field. His love and dedication for football shows every time he steps onto the field. Brown is always ready to step up when needed for his team.

Brown plans to attend trade school or play college football after he graduates.