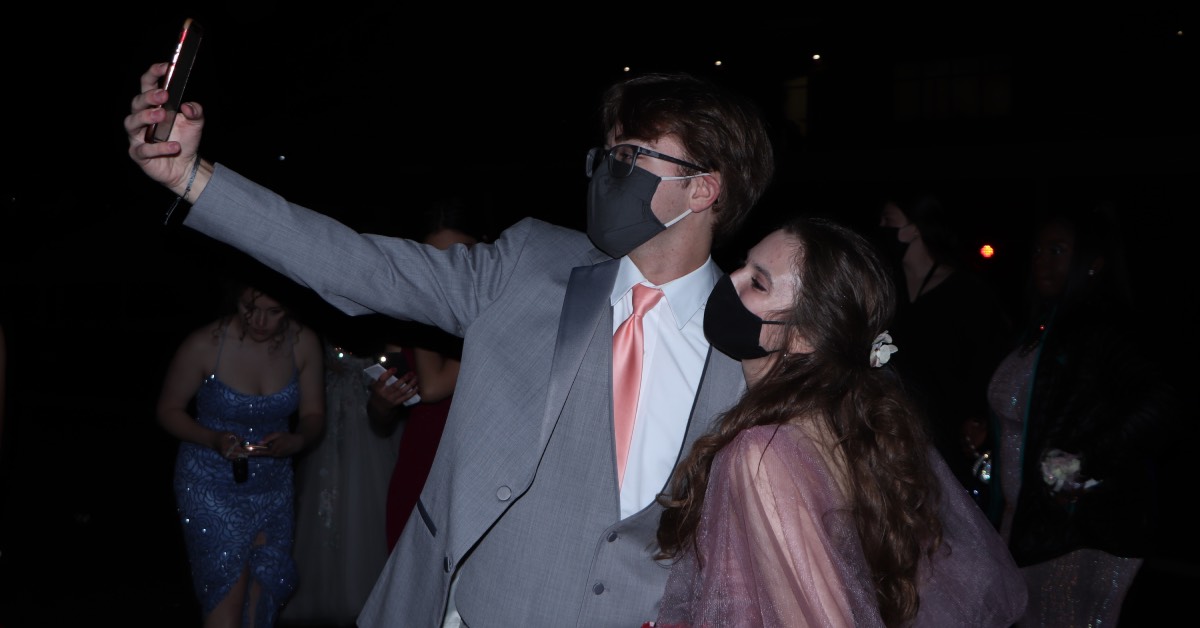 “I met with our principal, Sean Begley, a couple of times and we didn’t see prom happening,” said Brazzale. “Eventually, once we heard that Munster was having a parking lot prom, we decided that we would put a proposal together and send it to the health department to see if they would allow us to do a similar event.”

The idea of holding prom in the parking lot was changed to holding it on the football field. Holding the dance on the football field allowed students enough space to spread out while dancing, and the space was large enough to accommodate the number of people despite being at a limited capacity.

“The health department is very cautious with our school because of our size. They were very reluctant to give us the go-ahead to do a prom,” said Junior Class Cabinet Sponsor Allison Peda. “We figured hosting it outside would give us the opportunity to include more people. Our stadium holds 4,000 people and we were approved to have 600 in that space at prom. If we had moved it inside, that number would have dropped dramatically.”

Along with moving the dance outside, tickets were only available to seniors. This limitation was put in place to ensure that all the seniors who would like to attend the dance got the opportunity to do so.

“We were only allowed to sell 600 tickets, so we wanted to make sure every senior who wanted to attend could buy a ticket,” said Peda. “If we had opened it up to juniors, we would have sold out and had to check in with the health department on numbers and might have had to exclude some seniors.”

After a lot of uncertainty regarding the big events that are traditionally held toward the end of the school year, it was concluded that Lake Central High School would be having both a prom and a graduation ceremony. The health department is only allowing schools to have two large events for the school year, so one of the many gatherings that had to be sacrificed in order to have prom was the senior banquet.

“At first, we weren’t sure what we were going to have to sacrifice. The biggest thing was finding a safe way to hold the event so that the health department would approve of it,” said Brazzale. “We decided to make the event outdoors so that it was a large, open space. Because of this, we had to sacrifice having the dance in a hall. Luckily, because we decided not to have the dance in a hall it actually took our ticket prices down from what would normally be around $70 to only $15 per student.”

The ticket prices were so low because there was no cost of renting a facility and there was a reduced cost for food. Because the dance was not held in a hall, there were no meals served. Multiple food trucks were available in order to keep the option of eating at the dance open.

“I think the food trucks were a really smart idea because normally students go out to eat before or after the dance anyways, so not everyone eats at the dance,” said Brazzale. “When you have it at a banquet hall and have to get food, students are required to pay for that food that they might not be eating. Having the food truck ensures that there’s food there for students who want to eat at the dance, but it also doesn’t require students that aren’t going to eat at the dance to pay for the food.”

The dance being on the football field and having food trucks for dinner were not the only differences between previous proms and this one in 2021. There was also less time to organize the day, so the grand march was planned by the people who planned the dance in order to ensure all of the proper precautions were being taken.

“Normally, the Lake Central Education Foundation or Dollars for Scholars run the grand march, but with our time constraints this year, we took that over as well,” said Peda. “Also, there was way more help from assistant principals and people in the building since prom was held at Lake Central instead of the normal hall. There was a lot more student input and aid but it was from the senior class cabinet instead of juniors because only seniors were allowed to attend prom.”

Although prom was not held the traditional way this year, the class of 2021 was able to experience their own version of the dance. For many students, attending prom was one of the big things to look forward to throughout the four years of high school, and this year’s gave them that excitement in a new and fun way.