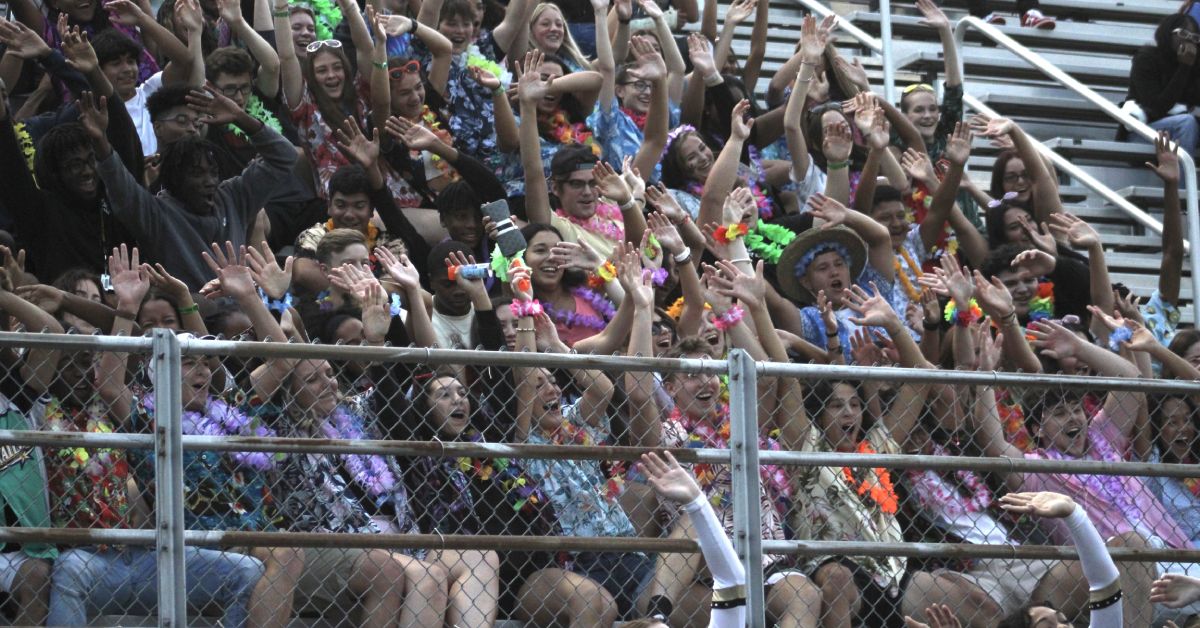 Griffith High School (GHS, the G) had a week of festivities and spirit in honor of the Homecoming dance. The week began with Dress Up Day for senior portrait pictures. This same Monday, the school had its annual powderpuff game between the senior and the junior girls, which was won by the seniors.

Pajama Day followed, giving students a casual break from Monday’s dress code. The seniors dressed as various celebrities to add to the fun of the day.

On Wednesday, students at the G celebrated their country during USA day. Seniors celebrated Gender Swap Day, wearing clothing of the opposite gender for the day.

On Thursday, everyone except seniors did Throwback Day, dressing as past decades. The seniors dressed up as old people for Senior Citizen day.

To finish off the week, all students wore black and gold in support of the school and for the Homecoming football game that night. After school, the students in each class council showed off their Homecoming floats in the parade.

Griffith Theatre Company (GTC) is going to put on “The Diary of Anne Frank” for its upcoming fall production. The GTC, currently led by Director Jenna Parker and Joseph Ramos, has been operating since 1907 and is looking to follow up one of GTC’s  best-performing spring productions, “Grease.”

“In ‘The Diary of Anne Frank’ by Frances Goodrich and Albert Hackett–newly adapted by Wendy Kesselman–Anne Frank emerges from history a living, lyrical, intensely gifted young girl, who confronts her rapidly changing life and the increasing horror of her time with astonishing honesty, wit, and determination. An impassioned drama about the lives of eight people hiding from the Nazis in a concealed storage attic, ‘The Diary of Anne Frank’ captures the claustrophobic realities of their daily existence—their fear, their hope, their laughter, their grief.”

Lead actor Ashley Taylor, says her favorite part of her role as Anne Frank in ‘The Diary Of Anne Frank’ is the character development.

“For my character as Anne, I think it is exciting that the audience gets to see Anne mature throughout the time while they are in hiding, which is something I look forward to portraying,” said Taylor.

Berzy serves at Griffith Public Schools as the president of the Griffith Federation of Teachers. She also works at a veterinary clinic. Berzy enjoys running as a hobby.

Many at GHS love the energy she brings to the classroom and all of the enthusiasm she shows at school.

“Being involved with the school has opened many opportunities for me to make positive changes and bond with other students at the school. I have also learned many leadership and responsibility skills through the office positions I hold,” said Worosz.

Worosz is able to balance all of her activities and maintain her top spot in class academically through time management and a rigorous work ethic.

Coupled with her already strenuous schedule, Worosz also dances outside of school for LM Premier Dance.

“I am on the competition team at LM Premier Dance in Cedar Lake. I started classes at this studio my sophomore year, and this is my second year on the competition team. I am in ballet, lyrical, contemporary, jazz, hip hop, production, and a few training classes, and I enjoy dancing at the studio,” said Worosz.

Berzy had only great things to say about Worosz. Worosz and Berzy have both been around each other for all of Worosz’s four years of high school.

“Madi has been my student for the last three years. I have gotten to know her well in my AP classes,” Berzy said. “She has an amazing work ethic and an inquisitive nature, something that teachers really value in today’s students, and skills that will take her far in life. She has also been active in the clubs I sponsor. She is Vice President of Student Council, and we have worked closely planning dances and activities.”

Worosz has a bright future ahead of her, and Berzy is one of many here at GHS that recognizes and acknowledges all of the hard work that she has put into her academic and extracurricular career at GHS.