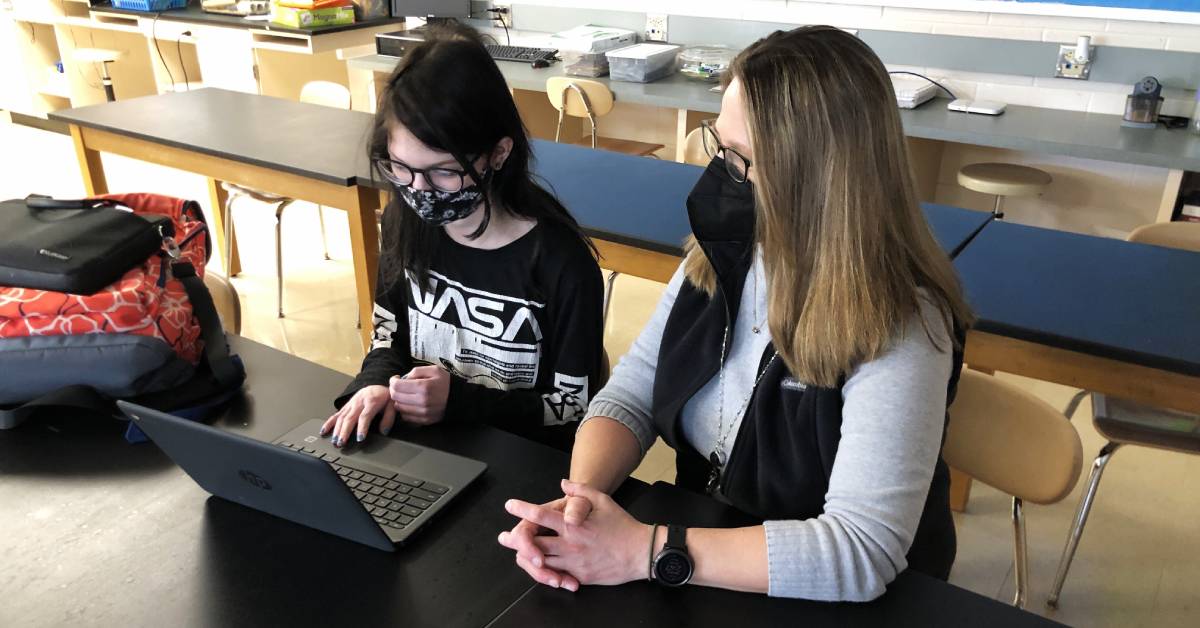 Samantha Joll has been a science teacher at Westville Schools for six years. She has previously taught middle school science, but this year, she took on the role of Westville High School’s chemistry teacher.

Joll’s first full-time teaching position was as a substitute teacher during a maternity leave at Willowcreek Middle School, where she taught seventh grade science. Following her time at Willowcreek, she began teaching seventh and eighth grade science at Chesterton Middle School. After 10 years of teaching at Chesterton, Joll joined the Westville family, where she has been a science teacher for six years.

Chemistry is Joll’s primary passion, so she was very excited to be given the opportunity to become Westville’s chemistry teacher this year. She noted, however, that this year has been very busy, and at times quite difficult, as she had to develop new lesson plans and adhere to a new curriculum for her courses. Despite this challenge, she is happy to finally be able to teach her favorite subject to her students.

In addition to teaching, Joll has coached Science Olympiad for 16 years, introducing the club to Westville when she joined the school’s staff. As the Science Olympiad coach, she has led her team in an academic competition in which students compete in various events that cover all disciplines of science. Under her guidance, her team has advanced from the regional competition to the state level every single year.

Though Joll loves the thrill of the competition, her favorite part of Science Olympiad is the connection she is able to make with students. She greatly enjoys working with students and helping them discover new interests and passions for future careers.

“I like mentoring students in Science Olympiad because it helps them approach college more prepared and knowing what they want to do more,” Joll said.

“The science nerds are a blast to talk to!”

Science Olympiad isn’t the only club Joll coaches at the school. She has also sponsored the school’s Quiz Bowl team for three years. Having always loved trivia, Joll would often go to restaurants on their trivia nights and compete on a team with other local teachers.

This led Joll and one of South Central High School’s teachers to start the trivia competition between the two schools. Unfortunately, Quiz Bowl has been put on hold for the year due to the COVID-19 pandemic, but Joll is eager to resume the competition once it is safe.

When Joll is not working at the school, she loves spending time outdoors. Nature is very relaxing to her, and, as a result, she can often be found hiking, canoeing, and camping. In addition to that, she has recently begun renovating her house and has found a new hobby in home improvement.

Joll became a teacher because she always loved the feeling of helping lead others through their classes. In college, she would frequently help her classmates study. Today, one of her favorite things about teaching is helping students become passionate about science.

“I like the personal connections that come along with teaching, too,” Joll said. “I get to be a nerd with the material and meet some great people.”

Ashley Hannon is a dedicated senior student at Westville High School and has remained quite active in both athletic and academic extracurricular activities all throughout high school.

Hannon has participated in sports ever since elementary school. During her high school career, she played on the basketball team all four years. In addition to that, she also participated in track and field for two years as a member of the discus and shot put teams, as well as cross country for two years. She has received multiple awards throughout her high school career for her positive attitude across all of her athletics.

Hannon recently finished her senior basketball season. She was the only senior on the team, and she was recognized for her achievements and dedication at the school's senior night. Basketball has always had a special place in Hannon's heart as it is her favorite sport, and she has participated in it longer than any other sport in high school.

“It’s the most team-oriented sport I’m in, and I always have fun playing and bonding with everybody on the team,” Hannon said.

Academic activities have also been a big part of Hannon’s life. She has been a member of the school’s athletic council for two years. In addition, she also participated in DECA last year. While competing at regionals, she made it to the state-level competition in her event, Travel and Tourism. Hannon has also been a member of the school’s branch of the National Honor Society for two years. This year, she is the organization’s secretary.

Hannon’s senior year has been quite unique as a result of COVID-19. Through frequent quarantines, unpredictable schedules, and numerous new restrictions, her senior year has been exhausting yet memorable. Though she is sad to end her high school experience, Hannon is anxious to begin the next chapter of her life. This fall, she will be attending Purdue University to study veterinary nursing.

Perhaps what Hannon will miss most about Westville is the personal connections she has made with friends, teachers, and others in the community.

Hannon said, “Westville is such a close-knit community, and I love that everybody gets a chance to know everybody else.”