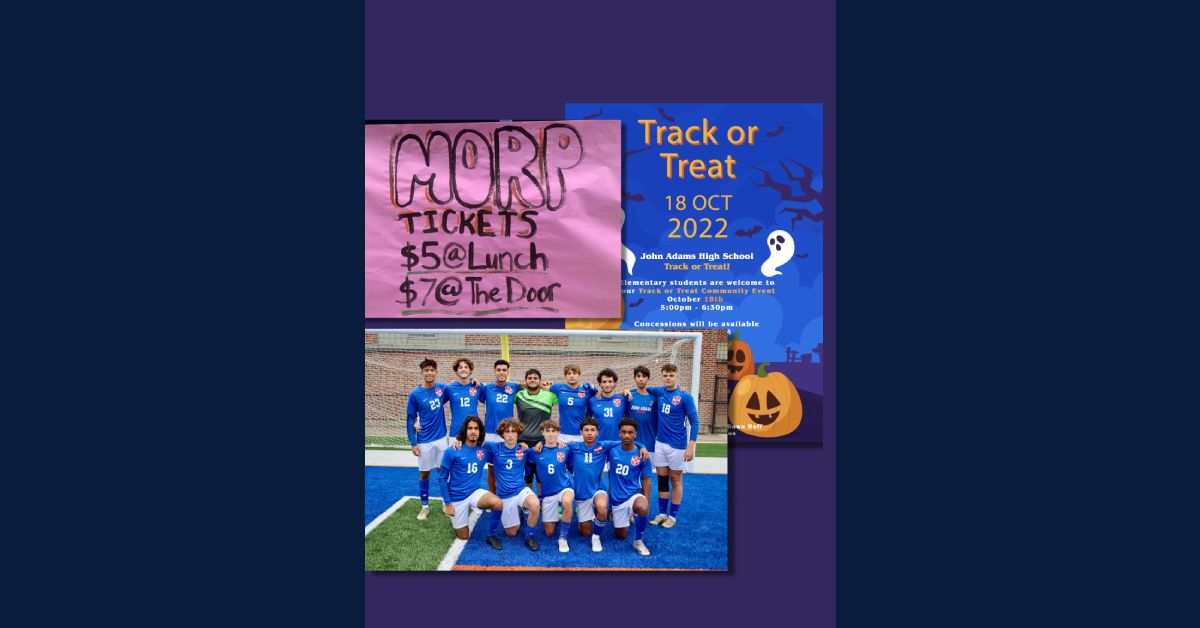 The John Adams High School Eagles have had a lot going on in and around the community in the last quarter. The students participated in the first spirit week of the school year. During spirit week, senior and junior girls participated in a powderpuff football game with the seniors taking home the win. All proceeds went towards the John Adams Athletic Department.

October 18 marks the last day of the first quarter and the start of fall break. Through the week of October 3-7, the John Adams boys soccer team will compete in the Indiana High School Athletics Association Sectionals. On October 18, John Adams will present their annual Track or Treat event for kids and families around the community from 5-6:30pm. The different clubs offered at John Adams will have decorated tables along the track and will be passing out candy in costumes. During Track or Treat, the junior class student government will be working hard to set up the cafeteria for MORP. The Halloween costume dance, having been canceled the last two years, is finally coming back strong for the 2022-2023 school year. From 7-10pm, students can enjoy music, drinks and fun while dressing up.

This month’s teacher spotlight is John Adams’ Katelyn Taylor. Taylor is a John Adams High School alumni who graduated in 2016. Taylor then went on to study to teach History and Government at Indiana University South Bend (IUSB).

“I had a really awesome history teacher here at Adams, and he really inspired me. I wanted to make this something other young people can be passionate about,” Taylor said

Taylor remembers how her history teacher helped her grow deeply involved in politics at the age of 18 during the 2016 Trump vs. Clinton elections. After graduating from IUSB and starting her job search, her love for the environment at John Adams was a key factor in taking her current position as an English 10 Honors and English 11 teacher. Although it was never in her plans to teach English, she felt that teaching alongside her college best friend, Grace Jozwiak, and her former Spanish teacher, Cecilia Stanton-Verduzco, was perfect.

As a young English teacher, Taylor feels as if she has a unique advantage in her connections with her students.

“I was just in my students' place seven years ago. I am able to put myself in their shoes and remember what worked for me in high school and what didn't. I am able to relate to them because I am in the same generation as most of them. I am able to show a genuine interest in their lives because I can relate to a lot of them,” Taylor said.

Her goals as a teacher come from both an educational and emotional standpoint. Taylor hopes to create a positive environment for students, giving them a place where they can feel comfortable and safe as well as helping them to gain confidence in their learning.

“I think a lot of times we focus so much on standards and making sure kids score highly on their standardized tests that we forget this is where they spend a good chunk of their lives,” Taylor said.

Two of Taylor’s students had nothing but great things to say about her.

“She is very patient with us and easy to talk to. It feels as if we are her own children,” junior Teala Major said.

“Our connection is more of a friendship connection rather than a teacher-student connection, but it’s still respectful. Her classroom feels like home, and she does whatever it takes to help us excel in her class.” junior Aniyah Jones said.

Although teaching takes up much of her time, Taylor also delights in powerlifting.

“I got into it at the end of 2020. I had been feeling very down from not being able to leave the house much, so I decided to give it a try,” Taylor said.

In a 2021 competition, Taylor won first place in her weight class through the strong relationships she has built with her cohorts and trainers.

“You don't have to have English come to you easily. You don’t have to be an amazing reader or writer. As long as you come in ready to learn and try, you will always succeed in my class,” Taylor said.

This month's student spotlight is senior Sebastian Pirela. The full International Baccalaureate (IB) student partakes in many clubs in and around John Adams. He notes that his high school experience has been a lot better than he expected. Pirela has made a lot of friends and new connections that he is grateful for through playing soccer for the last four years.

His favorite soccer memory has been winning the Hoosier Cup during his junior year season. He notes it was exceptionally memorable for the fact that they beat Zionsville Community High School, whom they had previously lost to his freshman year. On top of his love for soccer, Pirela participates in the John Adams Volunteer Association, Sociedad Honoraria Hispánica (Spanish National Honor Society), National Honor Society, International Student Organization, and Student Advocates for IB Diversity.

In recent weeks, Pirela had also won Homecoming King. He notes he didn’t think he would actually win, but winning gave him confidence in himself.

“It's something that I would not have been able to do as a quiet freshman,” said Pirela.

“My main goal for the future is to graduate college as soon as possible and join the workforce,” Pirela said.