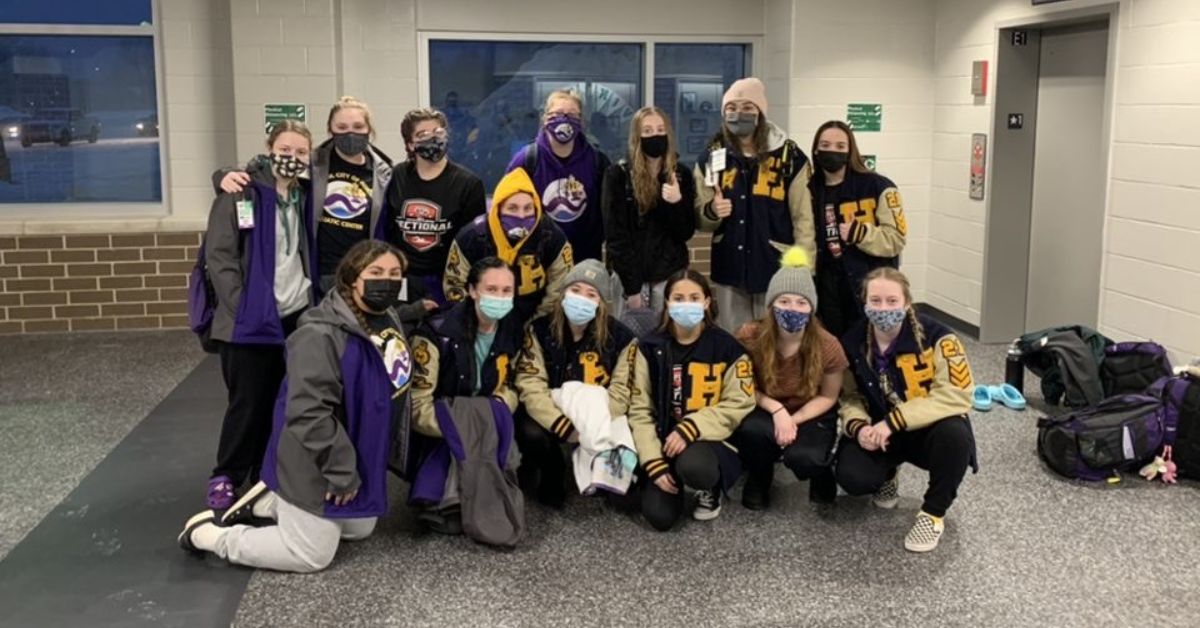 Hobart High Schools' swimming and diving season is still going strong. Even though the Girls Sectional finals were the last of the season for most, not everybody stopped there. Senior swimmer Emma Wright continued to fight for her Sectional Champion title in both the 50 and 100 freestyle. Wright successfully defended her title and will take a trip down to Indianapolis on February 14 to finish her high school swimming career, down at the State Finals.

On the flip side, diver and swimmer Alivia Ahner was named Sectional Runner-Up in the diving finals. That means she advanced to the Regional Competition on February 10. Out of the 20 athletes that compete in the Regional, only the top 12 make it to the final round, where the top 8 finishers will advance to the State Finals down in Indianapolis. Ahner finished her high school diving career placing 11th at the Regional Finals. Ahner has had a very successful and decorated career as both a swimmer and a diver.

Hobart High School’s Lady Brickie Basketball team had a joyful season. While there were many hang-ups due to COVID-19, the ladies ended their season with smiles on their faces. Just this past weekend, the Lady Brickies went against the powerful Crown Point Bulldogs in the first round of the Sectional Playoffs.

While Hobart fell short, their spirits were still very high. The Brickies were proud of how they played, especially because the Bulldogs ended up becoming Sectional Champions. The game against the Bulldogs ended the winter season for the Lady Brickie Basketball team, but they are ready and excited for the next season to come.

With winter sports coming to an end, spring sports are now beginning to start. These sports include track, baseball, softball, and boy’s golf. All these sports have started their pre-season practices and have instilled safe COVID-19 guidelines to hopefully have a full season without interruption. There are big plans and high goals for all the spring sports since there has not been a full season since 2019.

Key Club is known around Hobart for all the drives they host throughout the year. Right now, the current drive is the “Spread the Love Campaign.” This campaign is where students bring in jars of peanut butter and jelly into their sixth-hour class where the jars will then be donated to the local food pantry. This drive will end on February 19.

Seniors Emma Lewis, Addison Kash, and Delaney O’Brien have announced their senior project for the National Honor Society (NHS). They are partnering with a local nursing home, Belvedere Senior Housing, to send letters between the residents and NHS members. The letters are made to raise the spirits of the residents as they are still not allowed to have visits from family members and friends at this moment. Letters are going to be sent out as they come from residents.

Blankets for the Humane Society

Juniors Brett Nuzzo and Anna Stefaniak have also announced their service project for NHS. The local animal shelter, Humane Society of Hobart, is always in need and looking for donations of all sorts. One donation in particular that helps with the comfort of the animals are old blankets and sheets. This adds a more homely feel to the scary shelter life, and it’s more comfortable for the animals as well.

Shanena Knight is a junior at Hobart High School, and she is involved in a lot of activities that the school has to offer. Knight excels in everything from athletics to academics. During the fall, Knight picked up the game of golf and lettered her first year playing. Her teammates loved her company, and she added great personality to the team of seven.

For the spring season, Knight is the star athlete for the field event shot put and discus on the track and field team. While rankings for the season have not happened yet, Knight is a front-runner for becoming number one this year.

As for clubs, Knight is involved in a plethora. One she is heavily involved in is Key Club. Having over 40 hours of community service shows how important her involvement in Key Club is. Giving back to the community is a favorite pastime of Knight’s. Another club is Future Health Professionals (HOSA), formerly Health Occupations Students of America, where she regularly attends meetings and participates in state competition. Last year during the competition, Knight had to write a speech where she placed top 10 in the state, an honorable achievement.

Once Knight graduates from Hobart High School, she plans to pursue a career in Interior Design. While her college of choice is undecided, she is looking forward to meeting with schools during this semester of high school.