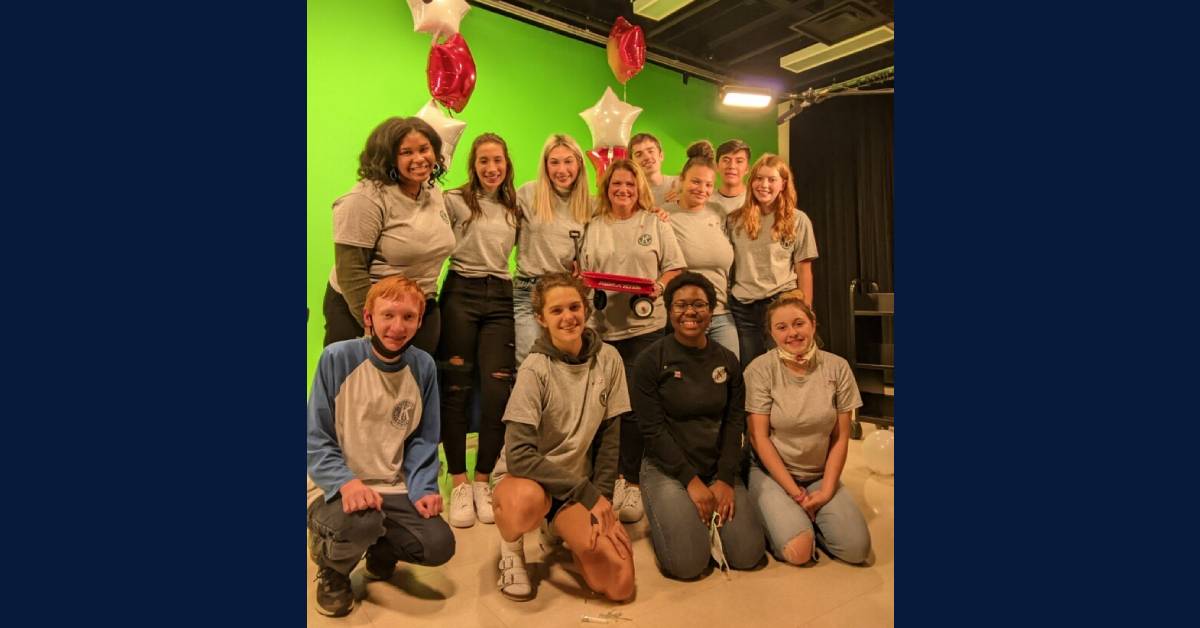 COVID-19 has affected everyone in one way or another; however, that is not stopping the students at Hobart High School. Hobart is a part of the few schools in the Region going back to in-person learning. The first day of in-person classes was pushed back two weeks, but this was to ensure maximum safety for both staff and students. Students and parents had the option to either stay home or to come back to school. Every student is socially distanced wherever possible, and masks are used unless eating, or during a mask break.

School is finally starting to become “normal” for students as clubs and sports are beginning to happen. There has been a variety of callout meetings for all different kinds of clubs, and the best part is that they are offered to both in-school and e-learning students, ensuring that nobody is left out. It is a wonderful way for students who still want to be safe at home to get involved.

Key Clubbers Got Talent! was a virtual telethon that was held to fundraise for Riley’s Children’s Hospital. Since COVID-19, a majority of the fundraising opportunities for Key Club were put to a halt. So, Key Club members had to get creative. A group of Key Club Leaders, including Elijah Puente, Emma Ramirez, Mary Daw, and Nejere’ Onomakpome, came up with the idea of a virtual talent show. These four students have been planning this since May, and it allowed the club to still raise money for Riley’s Children’s Hospital while following COVID-19 regulations. Talents were submitted from all over the world, and it was a great experience to be a part of. The telethon lasted eight hours, and a total of $7,000 was donated directly to the Children’s Hospital. The group is still taking donations at https://give.rileykids.org/team/303218.

Got golf game? Claire Duca sure does! Just this past week, Claire Duca and her co-captain Aliva Ahner qualified for the Lafayette Jefferson 2020 Girls Golf Regional. These golfers are the first at Hobart High School to qualify for regionals in eight years. Finishing with a score of 105, Duca had an amazing performance. She has been golfing since her sophomore year, so this was an amazing way to end her senior season playing for the Hobart Brickies. She was also named student-athlete for the month of October.

Being a senior during a pandemic is something that nobody could be prepared for; however, Claire is finding the silver lining. Right now, she is continuing her successful journey through the JROTC program. She has received many honorable mentions and awards in the program. For example, she received the Sophomore Leadership Award, which is the second-highest award in JROTC. Along with this amazing award, Claire has also received a varsity letter in the program every year since sophomore year.

Not only is she involved in school with JROTC, but she also participates in Color Guard as an extracurricular. Color Guard comes naturally to Duca, and she has gone to state three times for the activity, earning 2nd place each time. Once Claire graduates, she wants to become a Speech Pathologist and study at the University of Iowa.

Now, you may ask yourself, what is happening at Hobart High School? Well, the new Aquatic Center had a much-deserved opening ceremony on October 10. Even though the pool has still been in use, it was a great way to honor all the time and effort put into such a beautiful center. The open house was held from 10 a.m. to 7 p.m.

Along with the new aquatic center, there will be an open house for the new elementary school in Hobart, Veterans Elementary at Mundell. Both opening ceremonies were canceled in March due to COVID-19, so having these ceremonies was something that people were very unsure of. The City of Hobart is thrilled to honor the architects and the construction workers that spent so much time on these projects.

Additionally, Hobart clubs have a lot of community service initiatives going on. Key Club is having students lead a food drive in their neighborhoods. There will be steps taken to ensure everyone is staying safe from COVID-19. National Honor Society is cleaning the outdoor classrooms so classes can be outside, which will be an amazing way to give people a breath of fresh air. Lastly, a new club, Bring Change to Mind (BC2M), is doing the Yellow Tulip Project. The club is planting purple and yellow tulips at both the middle and high schools, signifying the stigma around mental health. It is a way to bring awareness to the struggles of mental health and how common it is for students our age.

Kenneth Cawthon has been a part of Hobart High School for the majority of his life. Cawthon became Head Coach for the Hobart Swimming Team in 2018. As a Hobart alumni, he was also a swimmer for the team back in 1999, where he swam for his entire high school career. Cawthon’s records are still on the record board to this day. He holds the 50 freestyle, 200-yard medley relay, and 400-yard freestyle relay school records.

Cawthon has been quite a successful and well-liked coach. Before coming to Hobart and coaching the team, he was a coach for the local Hobart Tiger Sharks.

“Ken has always been a very dedicated coach, he does a lot for his swimmers, and does his best to make us feel like a family,” said Junior Bridget Chavez.

Chavez has known Cawthon since 2016. Along with being very well-liked, Cawthon is also a very successful coach. In his first year of coaching, Emma Wright became State Champion for the 100-yard freestyle. Having him as a coach has been such an amazing and rewarding experience for both Wright and Cawthon.