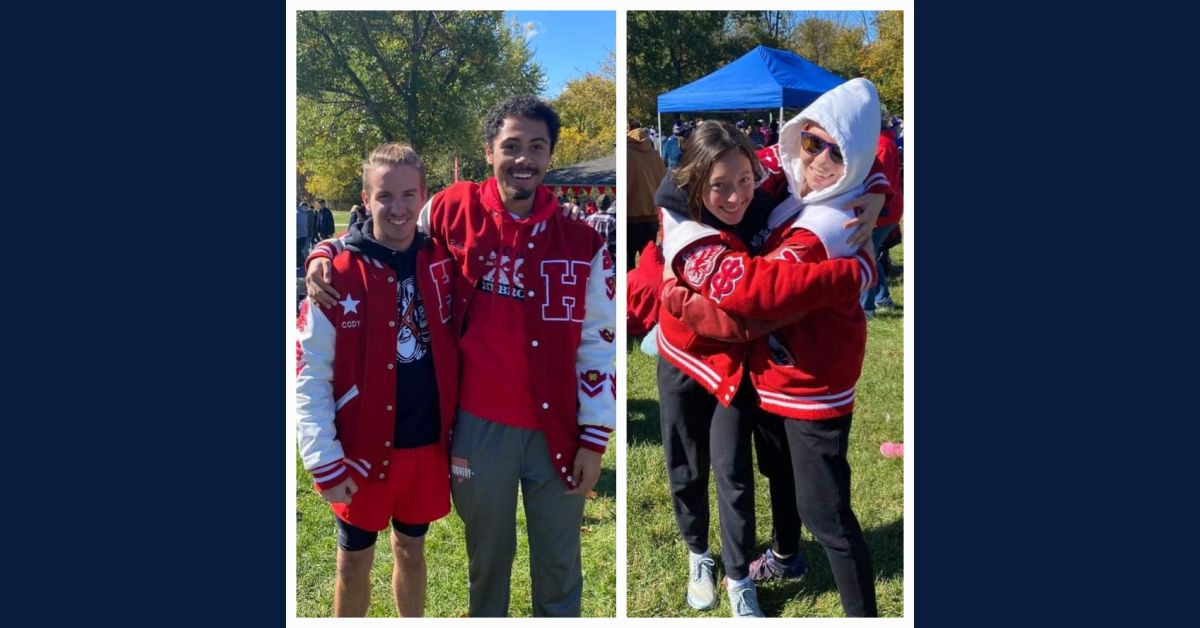 As October wraps up, Hebron High School’s (HHS) fall sports teams have faced the end of their very successful seasons. For instance, both of HHS’s cross country teams were as committed to their sport as always.

Cross country training starts at the end of the previous school year, and for some, even with the beginning of track and field the previous year. Without a doubt, cross country has some of the most dedicated athletes.

As Hebron’s Boys Cross Country team flew through a variety of courses across the Region, it was very successful in its races. The team placed third in the Porter County Conference (PCC) race and placed fourth at the New Prairie Invitational meet, which is the biggest invitational of the season and many runner’s favorite meet. As part of the team’s success, the Boys Cross Country team had two runners qualify for Semi-State Finals, Captain Cody Noel and Junior Robert Summerville.

“The boys did really well, and I saw a lot of improvement, and not just in running; the boys grew a lot and many of the younger runners matured. The team dynamic had its ups and downs, and the beginning of the season was rough. We really bonded midseason, but hit a rough patch when a runner left. At the end everyone was very close. Basically, when you're on a cross country team, you don't bully each other. We are one, and everyone deserves the same amount of credit,” Noel said.

Similarly, the Girls Cross Country team had one of its most successful seasons in a few years, also placing third in the PCC race and qualifying for Regionals as a team. As part of the team’s success, two runners qualified for Semi-State Finals, sophomores Ava Scheeringa and Emma Benetich.

“I thought our team started peaking at the right time and got us some good placements, especially for times when it mattered. The girls really made me want to come out for my senior year,” Senior Sidney Elijah, who leads the team, said.

“These girls worked hard and made this season lots of fun, and I can't wait to see what they do in the future,” Senior Gabby Wagoner said.

Members of the team experienced a lot of personal triumphs as they met or exceeded their goals.

“Some peaks from my season were making a personal record each race and seeing my times improve each time, as well as being able to bond more with all my teammates,” said Senior Makala Chang. “A definite peak from the girls team was being able to qualify as a team for Regionals, I’m so incredibly proud of the girls that ran Sectionals and put their hearts into that race to be able to qualify for Regionals.”

Wagoner and Chang’s leadership and pride for their cross country teammates shows the inclusivity and camaraderie that runs throughout that group.

Even though volleyball is the only indoor fall sport, the players did not let the restriction keep them from hitting new records and goals. Both of the teams put hard work in over the summer.

The Boys Volleyball team saw much improvement from previous years, reaching high peaks throughout the season. The Hawks had eight wins this season, advanced to the PCC Championship game for the first time in almost a decade, and won its senior night game.

“For me personally, my highlight of the season was being named to the All-Conference team at the end of the season. The team overall was just a great group of guys. We were better this year than we've been in a long time, and I think we'll be even more dangerous next year,” Captain Tate Hildebrandt said.

The Girls Volleyball team was set for success and proved it with a total of 14 wins this season. They also had their first sectional game win in nine years.

“This year was a very exciting season for Hebron, with many records broken. I can’t wait for next season. Volleyball is a huge part of me,” Asher said.

With many big games and events around the corner, athletes and fans are getting ready for the Hawks to eliminate their competitors with frosty force.

The wrestling team has much to look forward to for their upcoming season. According to Captain Keaton Loudermilk, the team is strong this year and is hopeful more Hawks will make it to Regionals and Semi-State.

HHS’s dance team have been working hard since the spring in preparation for this year. For the last four years, the HHS dance team has claimed the PCC Championship title and is planning on grabbing it again.

“I am so excited for this dance season to start. We have a very talented team, and I’m beyond excited to see how the season goes,” Dance Captain Riley Asher said.

HHS’s cheerleaders are ready to start supporting the Hawks once again. With months of preparation and plenty of practice and events over the summer, the cheerleaders participated in Hebron’s Fourth of July Parade and also a Cheerleading Bootcamp as well as many practices in between and after.

“I think the team could redeem itself from the PCC competition last year,” said Brynn Frankovich, captain and HHS senior. “We came in a close second place, and this year we are ready to take first. I think a new experience that would help our team is more pep rallies to get HHS more involved. As a captain, I think our team has started off strong; we have a lot of freshmen this year and they all caught on so well, so I am very excited to start this season.”

HHS’s Girls Basketball team is getting ready for a season to include more wins and closer games. With Coach Jerry Bechtold back, their prospects are looking good.

Senior Kylie Cole believes that things will turn around for the Lady Hawks this year.

“I’m so excited for this season, and I think a lot of people are going to be surprised with what we do,” said Cole. “We aren’t going to go down without a fight.”

“For this season, I am looking forward to the comeback of Hebron Girls Basketball,” said Senior Sidney Elijah. “The Girls Basketball team has always been overlooked, and I know with our new coaching staff and mindset, we can bring a new name for Hebron.”

“We have come a long way since last year as a team,” said Gabby Wagoner, senior. “There’s a definite change in the atmosphere. We will not be overlooked this year.”

Boys Basketball is getting ready for the start of its season, although off-season work started months ago. The team is hoping to have another remarkable season, but that will not come without time put into the discipline and teamwork.

“I am happy to be a part of this team. For this season, I am hoping we improve our record from last year and obtain the Keg," Senior Skylar Martin said,

The Keg is a PCC Boys Basketball tradition, where the schools compete for a little wooden barrel branded in the possessing school’s colors.

“I'm really excited for this season and the talent we have on this team,” said Landen Hale, junior. “We have to come together as a team and play; we can't just have one scorer. There is a lot of talent on this team, and I am hoping for the best because I know I'm not just playing for myself.”

Hawks basketball fans are looking forward to a great season to cheer on the team. Their first game of the season will tip off at home against Covenant Christian High School.

Cynthia Brown has taught at Hebron for 25 years. Brown is a part of both the science and math programs at HHS and teaches a variety of courses. Throughout the years, Brown has taught Integrated Chemistry and Physics, Physics I, AP Statistics, Algebra II, and Pheta, a video production class.

The best of both the math and science worlds, Brown likes mathematical science, where the lessons relate to everyday experiences. Her goal is to make math relatable for students, so they understand concepts readily.

Math and science always appealed to Brown, even when she was in high school. She originally went to school for pre-pharmacy. When facing a need for change, she found teaching, and Brown is able to share her love of math and science everyday.

“Don't ask me to pick math or science,” said Brown. “I love both. All the science I teach is math-based.”

Brown’s favorite students are usually found in her Physics I and AP Statistics classes. Her preferred method of teaching is using hands-on methods to applying skills taught in class, and this can be exemplified in her AP Statistics “Bungee Barbie” project, where students calculate how many rubber bands it would take for a Barbie doll to do a bungee jump as close to the ground as possible without hitting it.

Since some of her classes are building blocks to other classes, it makes Brown glad to see a student have a lightbulb go off about a certain concept, and that makes her more excited when students are excited about her class.

Hildebrandt began learning to play the piano in 2012, and his passion for the instrument grew from there. In the decade since, he has become very skilled with this instrument. He dedicates an hour a week to practicing.

As a varsity athlete, Hildebrandt plays for the Boys Volleyball and Baseball teams. He is a leader on both teams and has a lot to offer.

Hildebrandt’s favorite part about volleyball is how fast the game is; it keeps his reflexes quick. Hildebrandt also enjoys the memory of the team making it to the Boys Volleyball PCC Championship in October.

Hildebrandt enjoys baseball for the tradition, as he has played it since he was young and has never thought about stopping. He knows he will miss baseball season when it’s over.

On top of his athletic involvement, Hildebrandt is also a member of HHS’s Business Professionals of America (BPA) chapter and competes on the Academic Spell Bowl team. He enjoys the BPA experiences attending the State Leadership Conference and being able to be involved with his friends.

“I make sure I have everything done before moving on to the next thing,” said Hildebrandt.