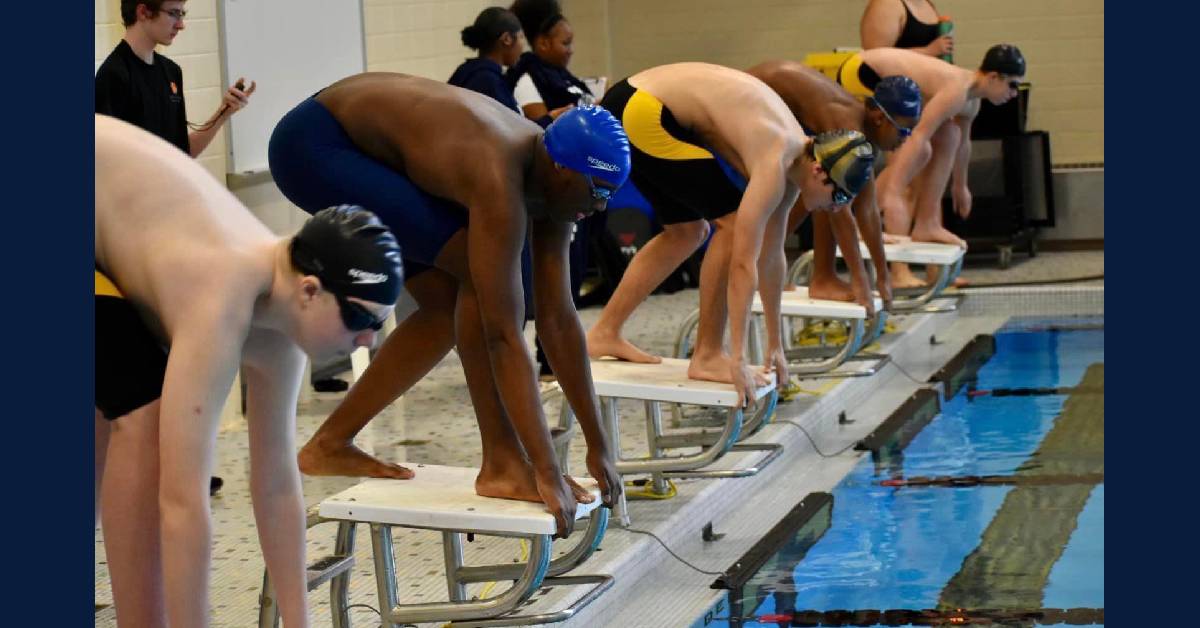 Prior to the tournament, Griffith’s last game on December 27 was an extremely tight one that went down to the wire against Calumet in which Griffith escaped with a 43-41 win. Ironically, Griffith opened its Holiday Hoopfest run with a rematch of its last game. Griffith came ready this time, blowing Calumet out by 21 points (61-40).

The Panthers were led by Junior Cameron Chandler who had a game-high 14 points and seven rebounds. Chandler said this game was important in order to get some momentum going into the rest of the tournament.

In the next round, Griffith was met by Hammond Morton, who previously won a close match against Morgan Township to get to this game. After the first half of the game, Griffith led by just one point (30-29). In the second half, the Panthers blew the game open and proceeded to go on a 39-26 run to close out the Morton Governors. This game, the Panthers were led by sophomores Colton Strezo, who had 14 points and eight rebounds, Gianni Feaster, who had 14 points, and AJ Hatch, who had a near double-double with nine points and a career high nine assists.

“At the half, we discussed our rights and wrongs, but more importantly what the opposing team was doing wrong," Feaster said. "We came out in the second half and exploited their defensive weaknesses as well as stepped up on defense.”

Feaster added that he and the team have a clear cut goal this season.

“We want to be a respectable basketball program this year, and winning against this team shows our progress," he said.

Hatch, who put up a career high nine assists, credits his speed for his ability to create opportunities for his teammates against Morton.

“It was hard for my opponents to stay in front of me, which allowed me to get into the paint easily and find my open teammates," Hatch said.

In the championship game, the Benton Central Bison awaited the Panthers. Benton Central came all the way from Oxford, Indiana, and were 8-2 at the time of this game.

Through the first two quarters, both teams were having trouble scoring, the score at halftime only being 25-21 in favor of the Bison. The last two quarters, however, were controlled completely by Benton Central. In the second half, both teams combined for a measly 18 points, a number that both teams had scored in a single quarter alone this season. Benton Central took minutes at a time per possession in order to run the clock down and eventually won 35-29. Despite the tough loss, at the moment the Griffith Panthers are 5-6 and are looking to be at 0.500 winning percentage for the first time at this part of the season since the 2019-2020 season.

Starting with Girls Basketball, the person who stood out was sophomore Briana Esquiviel. Esquiviel has been playing since she was in kindergarten and has got great experience being on the team for last year's regional run.

“It feels great being able to help my team out and contribute as much as I do," Esquiviel said.

Despite her youth, Esquiviel still has strong goals set out for the team.

“A goal I have for the team is to no matter what try our hardest and put as much effort as we can into the rest of the season," Esquiviel said. “I want to keep trying my hardest and work on my skill so that I can help out the team even more."

For the Boys Basketball team, sophomore Colton Strezo stood out as someone that could seriously benefit the team with consistent high level play. Strezo also started at a young age, and says he loves the game.

Strezo sees his importance to the team at the three-point line.

“I feel my shooting is important to the team because every team needs a shooter," Strezo said. “My goal for our team is to get our record above .500, learn from every game we play, and never give up. My personal goal is to have a three point percentage of 50% by the end of the season.”

One of Griffith’s most accomplished athletes, Connor Cervantes, is in the latter stages of his senior wrestling season. Cervantes has wrestled since he was four years old, and has always been a fierce competitor. He also gives some credit to his environment.

“I’ve been around lots of talent and many different wrestling clubs," Cervantes said. “My goals for the postseason are to go to state and place in the top eight.”

Swimming has been a lot more of a prevalent sport as of recent, and both the boys and girls team have standout athletes. On the boys side, senior Terrence Salazar-Ray has been the leader. Terrence is a veteran on this high school team.

Salazar-Ray swims the 200 freestyle, 500 freestyle, 400 freestyle relay and fly in the 200 medley relay. On the girls side, the team is led by Senior Claire LaBadie. She has swam competitively for ten years.

“I swam Highland age group for all 10 years, and was on the high school team since eight grade," LaBadie said.

Lastly, GHS' bowling program has had some exceptional athletes come through, one of the most pristine athletes being Allyson Lawson. Lawson has been bowling for 14 years.

“I have experiences at many different bowling alleys with different oil patterns," Lawson said.

She also said that she is able to change her walk and technique based on the ball’s reaction. Lawson has a goal similar to many others mentioned here, which is to make it to state as an individual. She also mentioned that it would be great to have the team advance to state as well.

GHS Teacher Sara Jongsma grew up in Oak Lawn, Illinois and works in the Family & Consumer Science department. She teaches Principles of Human Social Services, Nutrition and Wellness, and Interpersonal Relationships. Away from teaching, Jongsma is also highly involved in extracurriculars. She has coached color guard for three years and choreography for four. She has also sponsored Family, Career and Community Leaders of America (FCCLA) for five years and the Freshman Class Council for eight years.

“I like knowing that what I teach will be 100% helpful for my students’ futures," Jongsma said.

She calls it “the FACS of life."

“My students may not remember my name 10 years from now, but when they cook dinner for their future family, budget for a vacation, or fix a tear in their child’s clothing, they will use something they learned, and I think it is awesome to have that kind of lasting impact," she said.

“I enjoy being able to see my students outside of the classroom, having the ability to watch their passions lead them," Jongsma said.

She also likes the lightheartedness of these activities.

“I enjoy being able to joke around and be a bit more relaxed with students in an environment outside the classroom," Jongsma said. "I'm able to share my passions and interests with them while helping to foster theirs."

Jongsma began as a dance major at Ball State University before switching to education, She ended up graduating with an associate’s degree in Musical Theatre Dance and a bachelor’s degree in Family Consumer Science. She has performed in over 20+ musicals in the Chicagoland area and worked as a stage manager, spotlight operator, choreographer, and stage crew for about a dozen more.

Jongsma’s hobbies include scrapbooking, reading, traveling, spending time with her family and being a great teacher and influence.

Julia Gonzalez is a senior at GHS. She has participated in theatre and Paranormal Society all throughout high school as well as Academic Bowl and tennis over her junior and senior year. Gonzalez has done just about everything you could think of involving theatre, including costume crew, set crew, acting, and directing. Her most recent activity within the Griffith Theatre Company (GTC) was co-directing “The Diary of Anne Frank."

Gonzalez is also a State Thespian Officer (STO). This is her second year doing it, and she is on a board of 10 thespian student leaders across the state that meets a few times a year to organize theatre events. She refers to STOs as the bridge between the adult board and the students. She is the chairman of the group and organizes everything since it is her second year in the program.

Gonzalez also says she will be competing at state this year.

“I am doing two monologues, so I’ve been doing a lot of preparation for state – organizing it as well as getting ready to compete,” Gonzalez said.

Gonzalez is also on the AB Honor Roll.

She credits these different topics with shaping her as a person.

“I’ve realized I really enjoy social studies classes, but I’ve also learned to love English and even math," Gonzalez said. "I also think I’ve really enjoyed theatre because it has helped develop who I am and especially my social skills. I think school has entirely shaped who I am, and I think I’ve done a good job learning not only in the classroom but from everything I’ve experienced in high school.”

Gonzalez also thanks certain role models at the school who have also shaped who she is.

“Luann Pramuk helped me to strive to always do my best and not to be lazy by helping me realize how learning is something I love to do, and how putting my best effort in what I do is not only beneficial to my grades but also to who I am as a person," Gonzalez said. "Jenna Berzy helped me become who I am by holding me to a standard and setting an expectation. She never had to press me to do well because I always tried my best to work to her standard. She has helped to dramatically improve my work ethic."

Looking ahead, Gonzalez has some direction in what she plans to do post high school.

“I’m still currently undecided on where I will go to college, but right now the majors I’m interested in are political science, pre-law, and statistics," Gonzalez said.