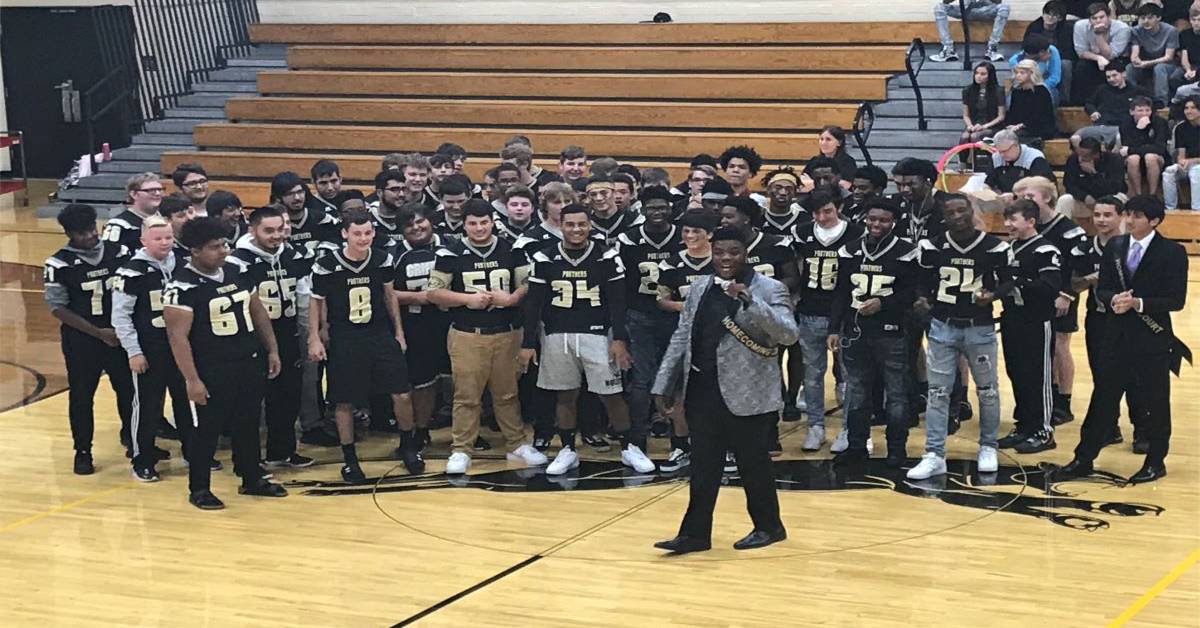 On October 4, Griffith High School held its 2019 Homecoming Game against Boone Grove after a day filled with festivities and school spirit. The dance took place the following day on October 5 in the school fieldhouse. This year’s theme was The Wizard of Oz, the classic 1939 movie, and celebrations included a Spirit Week, pep rally, homecoming court, parade, and of course the main events –the football game and dance.

Spirit Week began on September 30 with Green Bling Day for underclassmen and Cowboy Day for seniors; seniors dressed up like ranch hands, farmers, and rural citizens while everyone else wore green attire. On Tuesday, underclassmen had Which Witch is Which Day (twin day), while seniors and juniors wore their Powderpuff Football game jerseys. Wednesday was Decades Day for seniors and mix-match day for everyone else. Seniors held their infamous Gender Swap Day on Thursday; boys donned dresses, wigs, and makeup while girls borrowed their brothers’ clothes and hid their hair under baseball caps. Juniors, sophomores, and freshmen disguised themselves as animals. Friday, the day of the game, was all about wearing this year’s Homecoming T-shirts or school pride regalia.

The annual Powderpuff Football Game was scheduled for Tuesday but had to be postponed until October 15 due to weather concerns. Seniors played flag football against juniors. Anyone could join as long as they showed up to practice and wanted to help their class win.

“It’s super exciting to see all of your classmates come together and take on a younger grade,” said senior Emily Keck. “I think everyone was more hyped during homecoming week, but once we got on the field for the game after it was rescheduled, everyone was excited to play.”

On Friday, the entire school skipped seventh and eighth periods to head down to the main gym for the pep rally. The choir sang the national anthem, the marching band provided pep tunes, and the school’s dance and cheer team egged on the crowd. The homecoming court, five senior males and senior females, was introduced. The rally also included teacher versus student challenges, ranging from dance-offs to push up competitions. The pep rally came to a climax with the traditional tug of war: one round between freshmen and sophomores, a second between juniors and seniors, and a final between the winners. The seniors emerged victorious over the juniors and sophomores.

At 4:30 p.m. at Griffith’s YMCA, the homecoming parade commenced led the Griffith Marching Panthers flanked by two columns of cheerleaders. As the band blared the school fight song, “On Wisconsin”, and Michael Jackson’s “Beat It”, cars carrying the homecoming court, floats built by the class councils, football teams of all grades and ranks, and local organizations followed, waving and throwing candy for children. The people of Griffith came out to cheer on their school.

In the end, the Griffith Panthers lost with a final score of 27-7. At halftime, the homecoming court came onto the field to see who would be crowned.  Sara Mehisen was elected queen while football champion Rashod Shaw was crowned king. After the coronation, the Pantherettes and the Griffith Marching Panthers performed their halftime routines.

The dance was held the next day in the school fieldhouse. Towers of green balloons with golden stars at the top, a scenic backdrop of Oz, a model tornado, and large cut-outs of Dorothy, Scarecrow, Tin Man, and the Cowardly Lion watched as the students danced and partied.

“Everyone was having a good time, some dancing, others talking,” said sophomore Gabrielle Fink. “We were all taking pictures together. I was dancing with my boyfriend. I had some friends there who did not know how to dance, and I made them get up and start dancing with me.”

Homecoming is always a special day for the school, and Griffith High thoroughly enjoyed the results of the senior class council’s hard work.

“I really liked the theme this year, I thought we did really good with the decorating and the floats,” said Jenna Berzy, GHS social studies teacher and president of the council. “I thought the theme worked out really well. It was a good Homecoming; it came together nicely.”