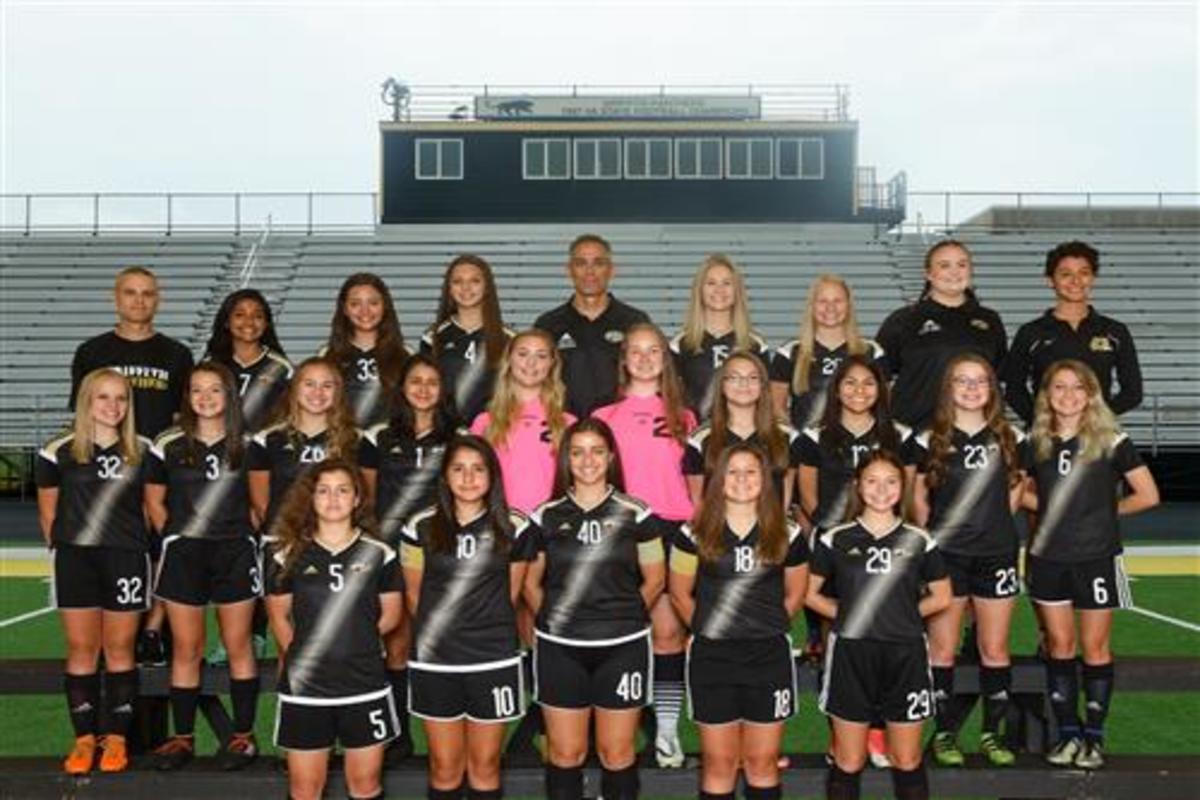 For the first time in Griffith High School history, the girls soccer team won the sectional championship title. On Saturday, October 6, the varsity team went head-to-head with their rival team: the Highland Trojans. This rivalry has gone back for decades, making this game one for the books.

The championship game started as most games do, nervous players out on the field, teams making silly mistakes and falling in the mud due to the downpour that started during the National Anthem. During the first half, Highland’s senior Mackenzie Pickens made the first score of the game. Before the first half ended, senior Aary Cano tied the game with a goal on Trojan keeper, senior Morgan Rinkema. There were no goals scored during the second half, sending both teams into a shootout.

During the previous weeks, the Panthers practiced their penalty shots, perfecting their shots and tricks. Freshmen Emily Vasilak and Abby Prunty, juniors April Mendoza and Jenna Dye, and senior Nina Stosic were chosen to take the PK’s for their team. Griffith won the shootout 4-3, with sophomore goalkeeper Mackenzie Rooke saving all but one shot. Dye had the winning shootout goal, sending the team and fans into shock, cheers, and tears. For the first time in GHS girls soccer history, a sectional title was won. Between being the underdog team, playing against a lifetime rival, and the weather conditions, this game will forever live in the hearts and minds of both the players and spectators.

“It was a really scary experience to be chosen as a freshman to take a PK,” said Prunty. “I thought my coach was going to choose one of the older girls with more experience and skill, but I ignored everything around me and took the shot anyways. When we won, I was so happy because this had never happened before for Griffith. I was shocked that it happened, but I always knew we could do it. I hope that next year we can win again and advance further.” 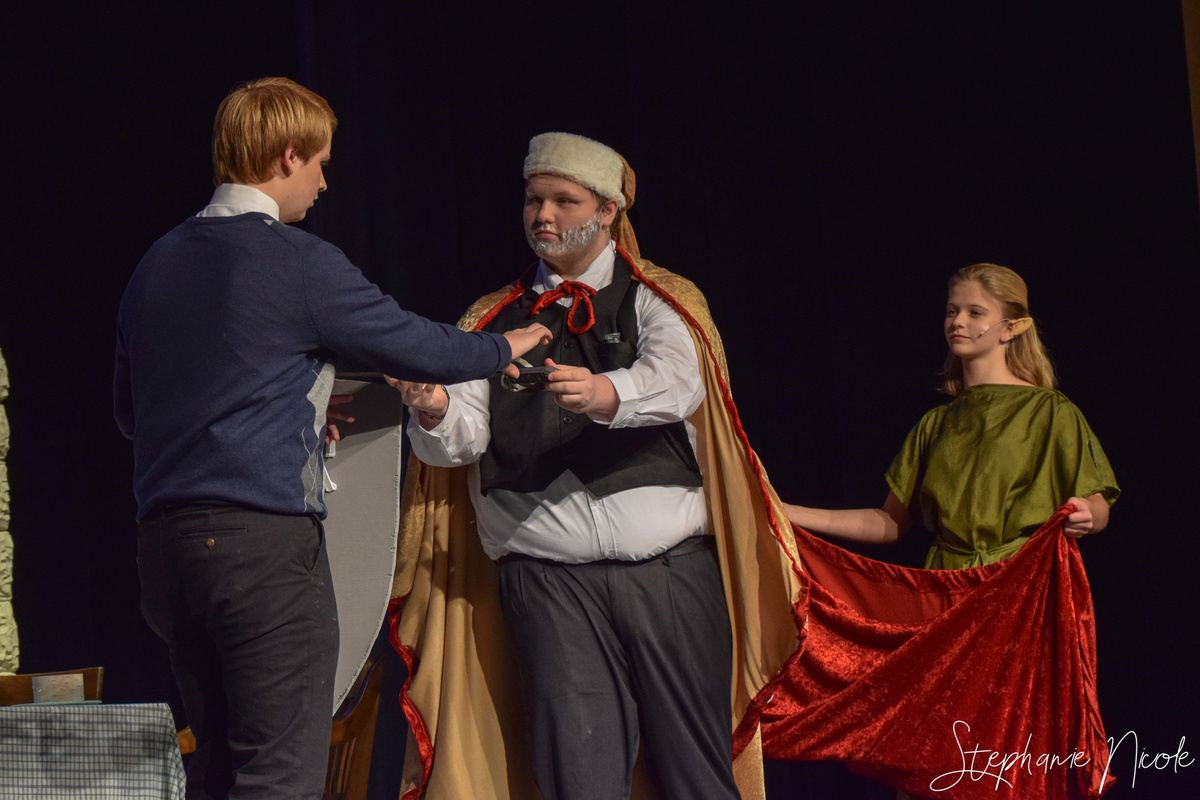 GHS’ Griffith Theatre Company (GTC) opened their fall production of “The Lion, The Witch, and The Wardrobe” on that premieres Friday, November 9. The show runs from November 9-11. This production follows the story of Narnia and the four kids who discover it through a wardrobe in a mansion they are staying at for the summer. The play features senior Emma Loomis as ‘Lucy’, juniors Tyler Smith and Jackie Bobos as ‘Peter’ and ‘Lucy’, and sophomore Kyle Rassel as ‘Edmund’. The four children enter into Narnia where they encounter the White Witch, a beaver family, evil fauns and elves, unicorns and centaurs, and much more.

“Drama is the only thing in my life that makes me laugh so hard I cry and motivates me to be the best I can be,” said Rassel. “Without it, I would be truly lost. In the GTC, I know I have found the place for me.”

Rassel was previously involved in the middle school drama nights, as well as high school productions such as “30 Reasons Not to Be In A Play”, and “The Music Man”, where he held major roles as a freshman. 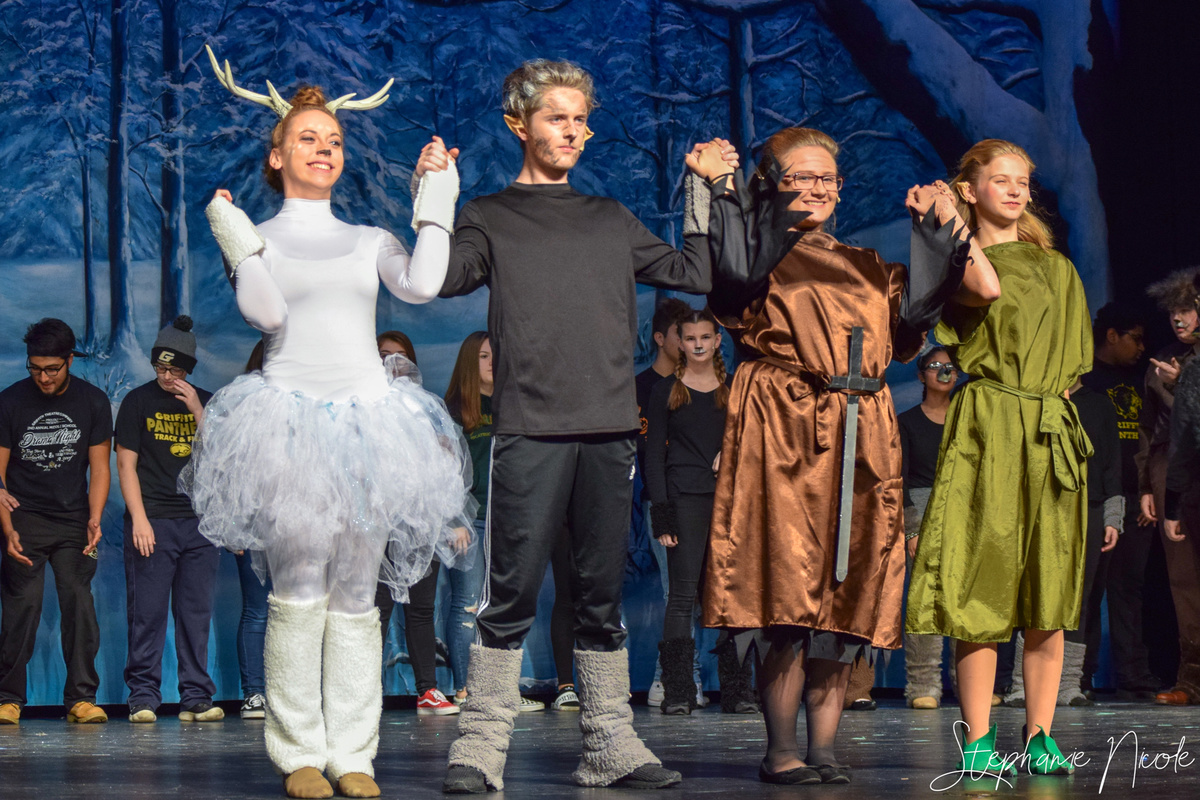 Senior Emma Loomis is making the most out of her senior year, most recently by acting as a lead in “The Lion, The Witch, and The Wardrobe”. Loomis has been involved in drama for six years, two years being in middle school at Munster, and four years with GTC. After transferring back to Griffith, Loomis rejoined drama and began performing her freshman year in shows such as “Footloose”, “And Then There Were None”, “The Music Man”. She has held either a supporting or lead role in every production since her freshman year. This fall, Loomis was honored to play ‘Lucy’, the youngest of the four siblings in “The Lion, The Witch, and The Wardrobe”.

“My favorite part about drama is the friendships I have made,” said Loomis. “The people I’ve met in drama are the closest friends I’ve ever had.”

Outside of drama, Loomis takes vocal lessons, and has been singing for nearly her whole life, performing at talent shows and recitals all over The Region. She is also Historian for NHS and President of the Best Buddies club at GHS, which helps create opportunities for people with intellectual and developmental disabilities by forming bonds and friendships with the members. Loomis is also serious about her education on top of these activities, being enrolled in AP classes and planning to go to college to pursue elementary education.

GTC consists of five directors that help ensure each show and rehearsal run as smooth as possible, each of them dedicating countless hours of hard work, using their talent to put on the best shows possible.

Jenna Candiano is the Director of GTC, and has been involved for five seasons now, directing multiple plays and musicals. Candiano has been teaching social studies at GHS for eight years, and has continued directing full time even though she is expecting in January!

Assistant Director Maggie Rivera is an art teacher at GHS, and joined GTC roughly two seasons ago to help out. Since then, she has used her artistic talent and handiness to create a life-size paper mache statue, costume pieces, and flats for sets on top of helping run rehearsals.

High school art teacher Jim Graff is set director for GTC, and has designed and built extremely impressive sets for many seasons. Besides teaching kids how to work power tools, build structures, and paint, he also teaches them responsibility, valuable life lessons, and hard work.

Math teachers Lauren Januska and Lauren Nelson have been hair and makeup directors for multiple seasons now, and ensure that the commotion in the green room stays controlled by assisting their girls with hair and makeup difficulties, and personally checking each and every cast member before they go on stage.

Each director sacrifices their time, talent, and sanity to put on the impressive productions GTC is known for each year.