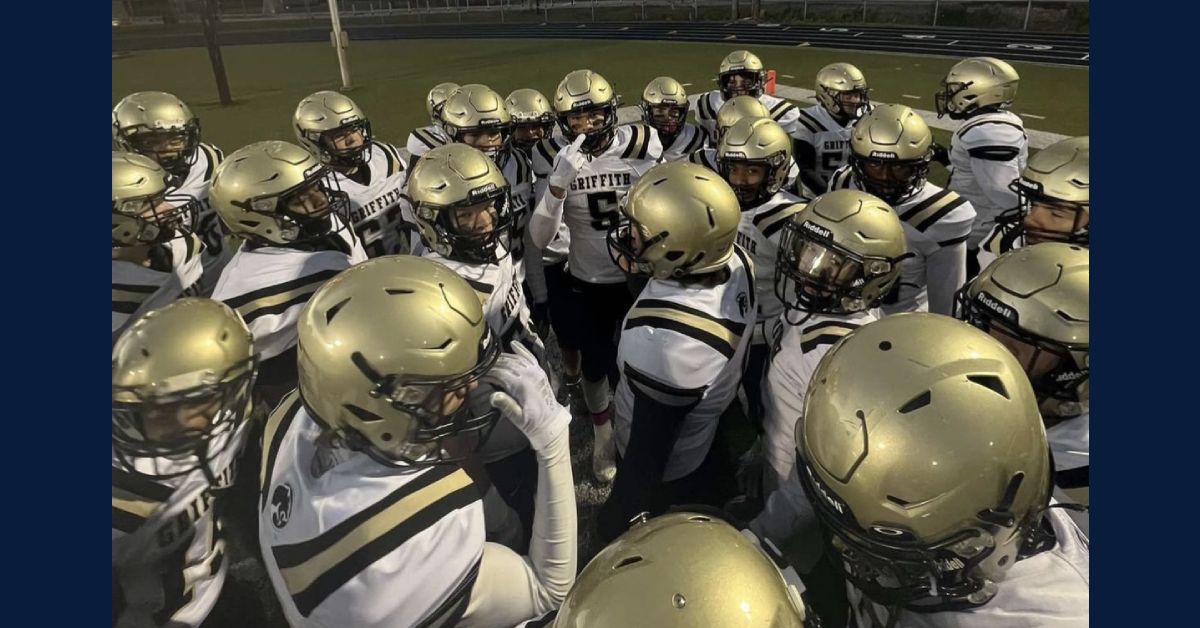 As the weather begins to get colder in the town of Griffith, Griffith High School’s (GHS) fall sports has come to an end. October 14 was Senior Night for all fall sports before Griffith’s football game against Wheeler High School. Seniors in Girls Golf, volleyball, Girls and Boys Soccer, Boys Tennis, cross country, and football were all recognized before the game. Seniors were escorted onto the football field by their families as they were announced along with their plans after high school and favorite memories at GHS.

Collin Pedraza and Maya Perez, senior soccer players at Griffith, were both a part of Academic All-State for their outstanding grades as student athletes. The Boys Soccer team’s best-performing player of the season, Logan Starks, received First Team All-Conference Honors, as did the girl’s team’s Sara Oprisko and Chloe Smith.

In football, seniors Carter Crowe, Connor Cervantes, and Tanner Hill all received co-MVPs. Football at Griffith finished 5-6 and third in their conference.

Griffith volleyball had some outstanding athletes this year including Bella Visak who averaged 11 kills per set and had a cumulative total of 165 at the end of the season.

“I’m sad my senior season is over, but I can’t wait to continue into college volleyball,” said Visak.

Griffith fall sports had excellent seasons this year. The little school holds some real athletic talent within our walls.

With the conclusion of fall sports, winter sports are officially in season. These sports – Boys and Girls basketball, bowling, unified bowling, swimming, and wrestling – are back for the winter season.

Students are anticipating these upcoming seasons because of athletes like senior Connor Cervantes in wrestling. Cervantes has gone to state for wrestling for the past two years and is expected to go again. Students are excited to see him further his wrestling career during his senior year.

Another highly anticipated sport at GHS is basketball. Basketball has always been one of the biggest sports of the winter season. Students are excited to watch in the stands.

“Basketball season is one of my favorites because there’s always so much energy at the games so they’re really fun to perform at,” Member of the Griffith Pantherettes Dance Team Catherine Cavasos said.

“I was inspired to become a teacher by my former high school art teacher, Bob Witt,” said Graff. “He made art and coming to school fun. Every day was something different. He took pride in what he was teaching and working with students. We learned about art and life lessons, and he gave us freedom to explore creativity. I saw how much he loved coming to school everyday and by the time I was a senior, I knew I wanted to become an art teacher.”

Outside of the classroom, Graff is highly involved in Griffith High School’s theatre program as the technical director, working on set and stage as well as lights and sound. He has been working with the theatre company for 20 years now.

Graff also acts as one of the sponsors of the Senior Class Council, working closely with the senior class in planning dances, organizing events, and building the senior float for Homecoming.

“I really enjoy working with the seniors during homecoming with float building and competing against the other classes,” he said. “I have had most of the seniors in the various classes I have taught and have watched most of them grow and mature over the last four years.”

Graff has been a core staff member and one of the most respected teachers at Griffith High School for many years.

“I have enjoyed my years here at GHS. I love working with and inspiring students to develop their skills and love of creating art,” said Graff. “I have worked with some amazing staff and students over the last 29 years and have built friendships and relationships that will last for years to come.”

Nina Zielke is a senior at Griffith High School. Zielke is a dual athlete in the fall with golf and cross country, and she plays basketball in the winter. Even outside of her major sports, Zielke is a highly involved student, participating in unified track, unified bowling, National Honor Society, Student Council, class council, and Best Buddies.

"I love cross country and golf season, but those sports are really independent,” said Zielke. “With basketball, I feel like it's really about working together so it's just so much fun. We definitely have a tough schedule in the beginning, but tough games only make us stronger as a team.”

On top of her impressive list of extracurricular activities, Zielke maintains a 3.5 GPA and is continuously on the AB Honor Roll.

Zielke is excited for basketball season.

“I’m prepared for this year to be a big year for rebuilding because most of our top scorers from last year graduated, but I think we have so much potential, and I can’t wait to build together as a team,” she said.

Zielke expressed that basketball is what she has been looking forward to most in her senior year.

Zielke acts as an incredible role model to underclassmen as a student athlete who remains persistent in her sports as well as her academics.