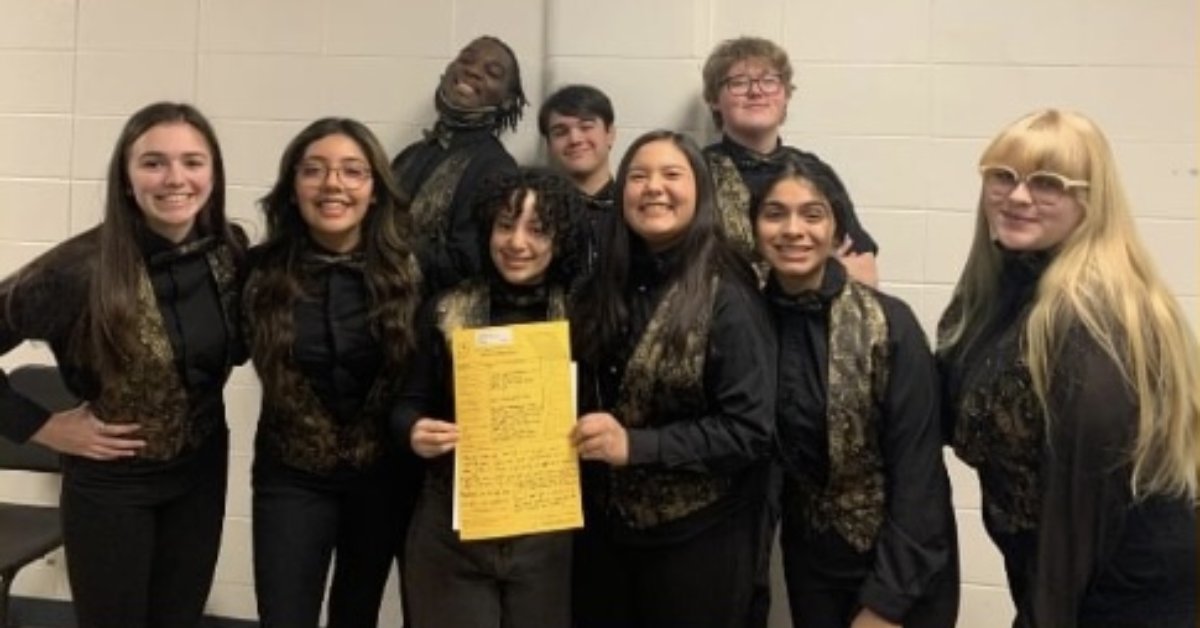 On Saturday, February 19, an extra-curricular high school choir class from Griffith competed at the Indiana State School Music Association (ISSMA) State competition. They traveled to Perry Meridian High School in Indianapolis, Indiana for the opportunity to showcase their skills and show the judges what they’ve been working on for the past couple of months.

The choir, taught by band and choir teacher Virginia Hernandez, consists of seniors Aseret Baez, Isabella Aranda, Amiah Reinbold, Daniel Sheffield, juniors Ashley Taylor, Elijah Neal, Carter Pala, Maya Perez, and sophomore Kylena Torres. After participating in a previous Solo and Ensemble competition on Saturday, January 29, and earning gold, the choir found out that they were advancing to the state competition as a large group ensemble.

As soon as the students arrived at the school that morning, they immediately went to the warmup and performance rooms to start practicing their song for the judges. This year, the choir decided to sing “Seal Lullaby” by Eric Whitacre.

After warming up, they performed their song in front of the judges and ended up earning gold!

“I was extremely proud of the work ethic of my fellow performers,” said Neal. “In the end, everyone pulled their weight, and we got the gold.”

The students of Hernandez’s choir class weren’t the only ones who competed at the state competition. This year, a total of 30 music students participated in the Solo and Ensemble Festival. Those students brought home to Griffith a total of 26 district gold medals, four district silver medals, nine state gold medals, and two state silver medals.

The students worked independently and in small groups to share their music with others. They grew as musicians and as people, so it’s pretty much safe to say that February was a great month for the Griffith music department.

For Family and Consumer Sciences (FACS) teacher, Sara Jongsma, nothing is more important in her career than Dancing with the Panthers, an event to raise money for the Northwest Indiana Cancer Kids (NICK) Foundation. This year, Griffith will host the Dancing with the Panthers (DWTP) event on Saturday, April 2, from 7 p.m. to 10 p.m. in the field house.

Novak began planning the event early to ensure that it was successful. She had meetings with the members of Family, Career, and Community Leaders of America (FCCLA). At the meetings, they planned the date, time, and amount of money they hope to raise. In previous years, over $2,000 have been raised for the foundation.

Each member of FCCLA is required to be the captain of or join a team. There is a limit of 10 people per team. Every team has to raise at least $200 to get into the event, and each team will also choose a color to represent them.

During the event, there will be a photo booth, bounce house, DJ, and concession stand, so the students have everything they need for the three hours they’ll be there. The teams will also compete in various dance contests and activities to raise more money towards their end totals. This year the team that raises the most money will win gold chains, mini trophies, and prize bags.

At the event, at least one member of each team must be on the dance floor the whole night. The point of the night is to turn something many people love, such as dancing, into a fundraiser that can help many kids. Having an event where high schoolers can dance with their friends, which results in more people, adds up to more money being raised for kids battling childhood cancer.

Although being a guidance counselor is her dream career now, this wasn’t always the case for Giron. She wholeheartedly intended on becoming a veterinarian so she could work with animals, but ended up being involved in several opportunities during college where she was required to work with the youth. She changed what she wanted to major in at the last minute when she realized that becoming a school counselor fit the needs of the career she was truly looking for.

Now, Giron can help guide her students every day by helping them find their dream careers.

“I think it’s rewarding when you know you’ve made an impact on someone’s life, even if it’s not immediate. It’s a really special feeling when you hear from people who you’ve helped in the past and they thank you for everything you’ve done for them,” said Giron.

This school year, Giron is excited to help guide her students into their futures because she feels as if they’re very mature about it. This is because she has already helped multiple students make informed decisions about their lives and has developed a mutual understanding with them based on the fact that they’re able to listen to reason and logic.

One idea that Giron believes could help further her relationships with her students is the concept of a summer program that helps seniors prepare for college. There’s a majority of college students who end up switching majors once they enroll or fill out something wrong on their financial aid applications, and Giron believes that the proper assistance could help rectify these issues.

During the program, students would have an introduction before entering their senior year that informs them on all possible scholarships to apply for, as well as different schools that are catered to their desired majors. This is just one of many possible ideas that Giron is bringing to the table this year as a new counselor for the guidance department.

“At the school I formerly was employed at, I encountered an undocumented student. She wanted to attend college, but there were a lot of barriers that prevented her from doing so. She had issues to the point where she couldn’t even receive any federal financial aid, and it was a complete mess. I spent the time with her to overcome all of these barriers so she could become a teacher, but I believe that a summer program before her senior year would have also guided her in the right direction,” said Giron.

Ariel Scieska encompasses many talents for just being a freshman at Griffith. This year alone, she performed on the color guard team, scored gold for a Solo and Ensemble performance as a clarinetist, and became the dance production assistant for the Griffith Theatre Company’s upcoming spring musical, “Grease." On top of all of that, Scieska is also a committed dancer for an outside dance company, as she’s officially been on pointe for a year.

When Scieska graduated from middle school to high school, she took the high school by storm by getting involved as much as she could. Besides being able to join extracurriculars, becoming a freshman allowed Scieska to have new educational experiences. While most freshmen would be nervous about these new opportunities, Scieska was the exact opposite. She dove headfirst into photography and ceramics classes to explore her artistic side accomplished many things that she's proud of this year.

"I participate in ballet, color guard, band, and theatre. I am the lead dancer in my pointe class as I have been doing it longer, have better technique, and have more experience. I am one of the members of the color guard team, and will possibly become the co-captain during my sophomore year. In band, I am a fifth chair clarinetist. I am also one of the hair and makeup stylists and the dance PA for the Griffith Theatre Company,” said Scieska.

Unlike color guard, band, and theatre, dance has been a passion of  Scieska’s since she was little. During her first year of it, she participated in a combo class of ballet, tap, and jazz.

“After I took my first combo class, I didn’t dance for a year. I took ballet classes again afterward, stopped, and then finally in fourth grade I started taking them again and have been constant ever since. I have been in four recitals and my upcoming one will be my fifth," Scieska said.

At the end of the day, Scieska said what she loves the most about participating in so many extracurricular activities all at once is the fact that she has been a part of a family in each one. She has made numerous, deeply connected relationships with her various teammates, coaches, peers, and teachers that will impact her for the rest of her life.

“I love being able to dance with my friends and also show the talents I’m capable of. With dance, I like the fact that I get to be on pointe with pretty costumes. During color guard, I love when we get to use pretty show silks and can perform in parades. When I’m in band, I enjoy playing different, hard, and interesting songs that I never would’ve dreamed of being able to play. I also love the competition aspect of it. Whenever I’m participating in drama, I feel like I’ve been a part of it forever because of all of the friends I have been able to make so quickly,” said Scieska.

Scieska is planning to attend the Area Career Center (ACC) next year for cosmetology in order to get a certificate in the study of hair, makeup, and nails. She wants to start work at a salon and eventually study cinematography and photography at a university. After college, Scieska hopes to either fully own a photography business or work for a big movie company as a photographer.