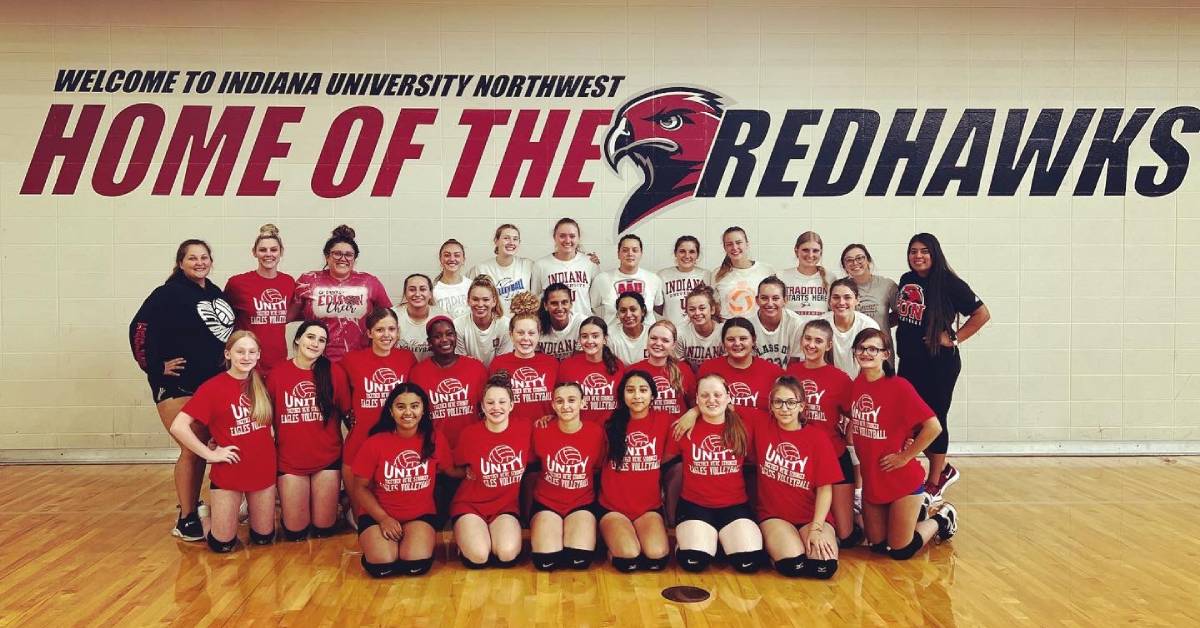 On August 5, Indiana University Northwest allowed the volleyball team to attend the school's gym facility and practice with them. The girls were very excited and grateful to be able to learn from collegiate players.

On August 9 the Lady’s Eagles' volleyball team played in a scrimmage against Covenant Christian High School.

On August 15 Edison’s volleyball team has its first official game of the season against Victory Christian Academy. Then on August 13, the girls have the Winamac Invitational Tournament.

Following, that week on August 20, the girls have the Hobart Invite Tournament where the group will play multiple teams.

Bringing in a new addition to Edison is the new girls' volleyball varsity coach, Cassie Bryant-Davis. Bryant-Davis attended college at Indiana University Northwest, playing on its volleyball team the Lady RedHawks. With having so much love for volleyball, Bryant-Davis is enthusiastic to be given the position of varsity head coach.

“I am very excited and proud to say I am the head volleyball coach at Edison. It is an honor to me that I am still able to take part in the sport I love the most," she said. "Coaching gives you a different perspective of the court versus being a player. I am excited to fully take on the role of leading this team, and I am already looking forward to a great season. The girls have put in a lot of work over the summer and they have improved tremendously already! I get excited seeing the excitement on their faces when something clicks or they do something really well. I am looking forward to seeing these ladies help improve their program.”

As a coach and a collegiate player, she not only brings knowledge of the sport to the team but love for the game as well. Every practice Bryant-Davis brings a positive attitude to the court, encouraging and guiding to improve the team's performance.

Before coaching Edison's varsity volleyball team, she coached Edison’s middle school volleyball team for two years. Davis is a remarkable addition to the varsity team as a coach, she has brought out the best in the team.

Bryant-Davis is a very goal-oriented and enthusiastic coach; she pushes her teams to both have fun and love the game, and to also be observant and focused on the court. She always tells her teams how important it is to be a clear communicator and have trust in each other's teammates.

One thing the team admires about Bryant-Davis is that she cares more about how hard you work on the court than how good you are as a player. Bryant-Davis always tells her teams it is about the dedication you put in while you are on and off the court.

Darne Toney, who is a hitter for Edison’s varsity volleyball team, consistently shows a positive and energetic attitude, regardless of the situation. Despite any obstacles her team may encounter, Toney is ready to play any role at any time and always comes prepared.

Toney strives to improve and shows relentless effort any time she is in the gym.

Without a doubt, Toney is a teammate you can count on to not only hold herself accountable, but her team as well, showing commitment to ensure the team succeeds. Toney is always ready to help a teammate when in need.

During Toney's freshman year, she tore her ACL. She needed surgery and was out of all physical activity for approximately seven months, making her miss her sophomore season of volleyball to recover. Toney refused to let that set her back and worked even harder when she returned.

“I was in therapy always after school and I was there my whole summer," she said. "I could say that it was a very painful recovery because I lost range of motion in my leg, so it became stiff. For example, I couldn’t do a full loop on the exercising bike because of the pain it had in my knee. As I started working on it, it started to become more loose and very easy to do. I had a very amazing therapist that guided me through seven months of work and encouraged me, by the end of the month I was strong.”

Going into her senior year, she brings strong leadership on the court to the team and is a teammate any underclassman can rely on. With this being Toney's last year of volleyball, she continues to bring motivation and a positive attitude to the team.

“I'm proud of myself, so of course, I feel amazing," she said. "I felt like it wasn’t as fast as everybody said it would be, but it’s a bittersweet moment for all of us seniors. What I wish to achieve this volleyball season would be just being better than who I was last year, and also just being mentally strong and physically, staying healthy and eating right.”

After graduation, Toney plans to attend college to pursue a career in nursing.

“I grew up around nurses and they inspired me to become one and just knowing that one day I could save a life really makes a difference," she said.