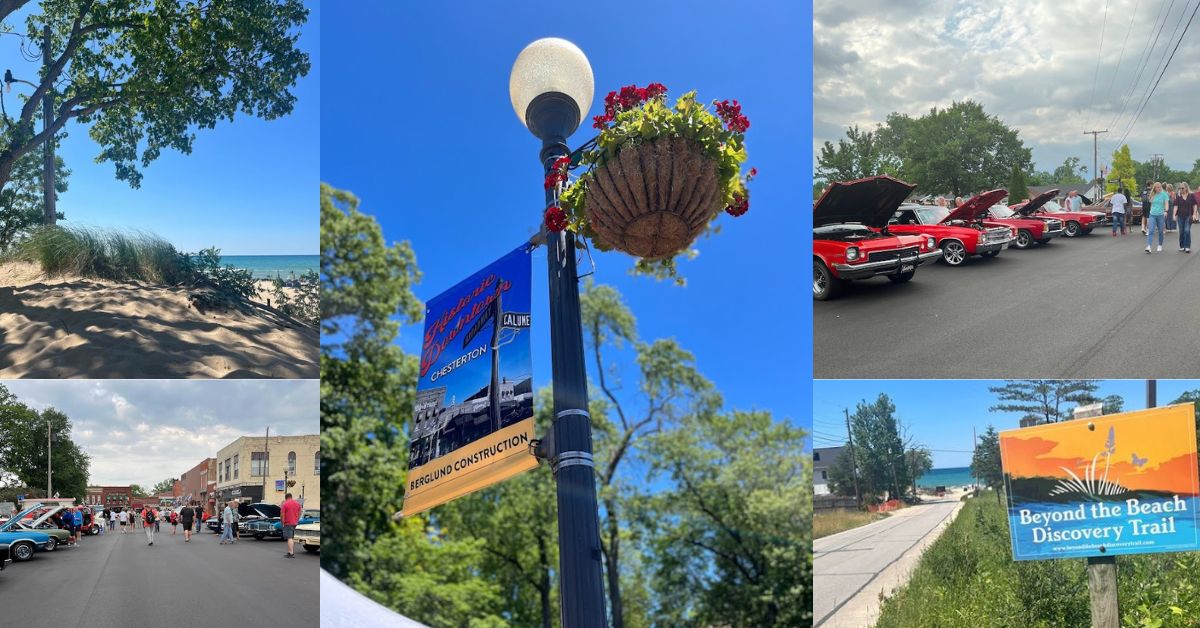 The Chesterton Cruise-In welcomed a great number of various automobiles and vintage cars for the community to see for its first opening. Parked cars were on display on Broadway and 3rd St. surrounding Thomas Centennial Park. The event is hosted by Mel’s Detail Shop, a local car detailing service, on the final Saturday of every month from May to September from 5 p.m. to 9 p.m. The event offers automobile enthusiasts a chance to showcase their vehicles as well as live music that is all free of charge.

“Ours is a ‘71 Chevelle. We’ve had it six years now and always had muscle cars, classic cars. Wayne had a GTO when I met him 49 years ago, so he’s always been into classic cars,” said Marilyn, co-owner of a ‘71 Chevelle. “He and his son-in-law put in the motor that’s under the hood right now and a lot of blood, sweat, and tears, but it turned out great. We’ve enjoyed going to car shows and that’s how we met them!"

The auto show not only showcased automobiles, but people’s passions were also evident in the willingness to share with passersby, in addition to the care put towards the cars’ maintenance and sharp appearances.

“I grew up with muscle cars, so it’s stuff that I’ve lived with and it's nice to see all these nice cars out here," said Wayne, owner of a ‘71 Chevelle.

A general fellowship with other devotees makes for a social hub for car-lovers.

“And we have a 72’ Chevelle,” said John, “I’ve liked cars since I was a little kid…they just stuck with you.”

In case you missed June’s Cruise-In and want to attend next month, be sure to mark your calendar for the final Saturday in July.

Coming up within the community is the 25th anniversary of the Indiana Dunes Annual Sand Sculpture Contest. The contest will be held on Saturday, July 16, 2022. This year’s theme for the sand sculpture contest is “Nature”.

The fee to enter the Indiana Dunes for this event is $7. There is no limit to how many people are able to compete; however, it is recommended that contestants arrive as early as possible to secure a parking space.

No prior application to enter the contest is needed. Those wanting to participate are to show up on the day of the event at 1600 N. 25 East, Chesterton, IN 46304. The registration table will open at 9 a.m., but competitors are allowed to begin their sculptures at 7 a.m. The contest will officially last from 9 a.m. to 1 p.m.

50 to 100 participants are currently expected to compete in the event. All are welcome to vote for their favorite sand sculpture. Prizes will be awarded following the voting for the "People's Choice Award at Noon" along with a souvenir for all of the contestants.

Heather Ennis is the President and CEO of the Northwest Indiana Forum, a local organization devoted to strengthening regional development and economic opportunities.

“Northwest Indiana has a place for you,” Ennis said.

Ennis acts as a representative for the Region’s business ventures and initiatives to improve the economy and job market, as well as increase the quality of life for everyone in the community.

Ennis received a grant of $50 million that is currently being used to manage 35 projects chosen through a selection committee. The projects have not been disclosed but were determined as being the best to further the Region’s growth.

“I think Northwest Indiana has the best of both worlds. Our proximity to the economy of Chicago and the great Indiana tax climate make us an attractive place for investment. The infrastructure that runs through our seven-county region can help us to grow into the next technology hub coupled with lakefront living,” Ennis said.

Since the transportation enhancement, millions of dollars have been generated for the Region for investments.

To bring different moving pieces together to augment the uniqueness of Northwest Indiana, Ennis explained the five pillars of regional economic development that are functioning within the community.

Ennis further described the five pillars of IGNITE the Region as building blocks to move the economy forward.

With the excitement of advancements for the Region and the sincere work of those in the community, the hope is that Northwest Indiana will flourish with time.

"It’s great work. Not easy–it is challenging, but it is so worth it to see the opportunities.”