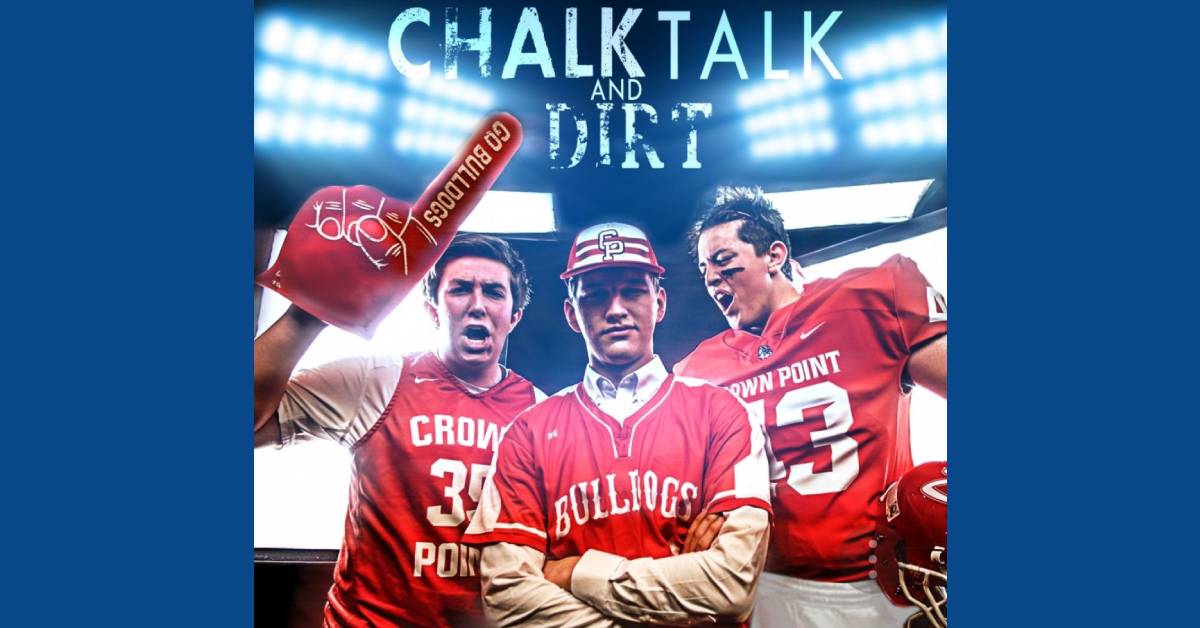 Chalk Talk and Dirt is at every home football game in Crown Point. The students begin their broadcast with light talk about that night’s game. When the game begins, they give a full play-play-play of the action. They record stats and gather data on players and teams before the game begins to discuss the likely outcomes of what may or may not happen before the coin toss.

Chalk Talk and Dirt will begin their transition to winter and spring sports such as baseball and basketball. Basketball and baseball sometimes get hidden in the spotlight of football’s presence, making it difficult to find stats and game predictions.

Gene Kolarik, who is a member of the Chalk Talk and Dirt team, also serves as the pitcher for Crown Point varsity baseball. He provides valuable ins and outs of the baseball scene for the broadcast team.

Chalk Talk and Dirt is one of Crown Point Highschool’s top sources of news and insights on what’s happening in the sports community. Being a student-run group gives the group an advantage because they know the players as more than just a number on the field, court, mound, etc.

Students and sports figures around the community get to feel involved in the high school sports community because of Chalk Talk and Dirty’s presence at Crown Point High School. People can listen in during their favorite sports seasons year-round. No matter which sport you love or are most interested in, Chalk Talk and Dirt has everything you need to know about your town’s team.

Chalk Talk and Dirt’s brain of the operation is Ramsey Harkness. He is a senior at Crown Point High School and has discovered a newfound love for sports broadcasting in the past years. Harkness is a dedicated and well-rounded student. In his sophomore year, Harness and his peer Andrew Milde decided to start the broadcast, and he has loved every second of the experience.

When Harkness graduates, he hopes that he can pass his broadcast down to a younger generation and that the love for sports broadcasting will continue for many years to come. He puts his all into the broadcast and shows up to all of Crown Point’s sporting events. He has high aspirations for his broadcasting career and couldn’t see himself doing anything else as a career. Harkness loves bringing people onto his broadcast and getting their insights on Crown Point High School’s sports. He has been broadcasting sports games since his junior year and has loved every second of it.

“I always wanted to be on ESPN when I was a kid,” Harkness said. “Originally as a player, now as a broadcaster for sports.”

Harkness is an intern score correspondent for Lakeshore Public Radio and is the youngest person to ever obtain that status, won #1 talk show in the state last year, and was nominated for a Chicago Emmy. He plans to go to ASU for his college experience and major in sports broadcasting.

How To Tune In

Many people from Crown Point and the Region may not know how to get details on sports and upcoming sports-related content. A lot of the work done behind the scenes of sports games and events flies under the radar in the community. Anyone can tune in to the broadcast via their mobile phone. Chalk Talk and Dirt is located on The Dog Radio app along with other broadcasts. Broadcasts for games can be listened to on the app when the game is scheduled to take place. You can also tune in to thedogradio.com to locate Crown Point Highschool’s broadcasts.

Crown Point High School is one of the few schools in the Region with such an advanced way of communicating sports news to the community. Chalk Talk and Dirt schedules a broadcast for Monday, Wednesday, and Friday nights consisting of various sports news all the way to the pro sports scene. Chalk Talk and Dirt’s 2019-2020 year is planned to be a big one.

With a full year of sports ahead for Crown Point High School, everyone who tunes in is in for an ear full of sports talk.