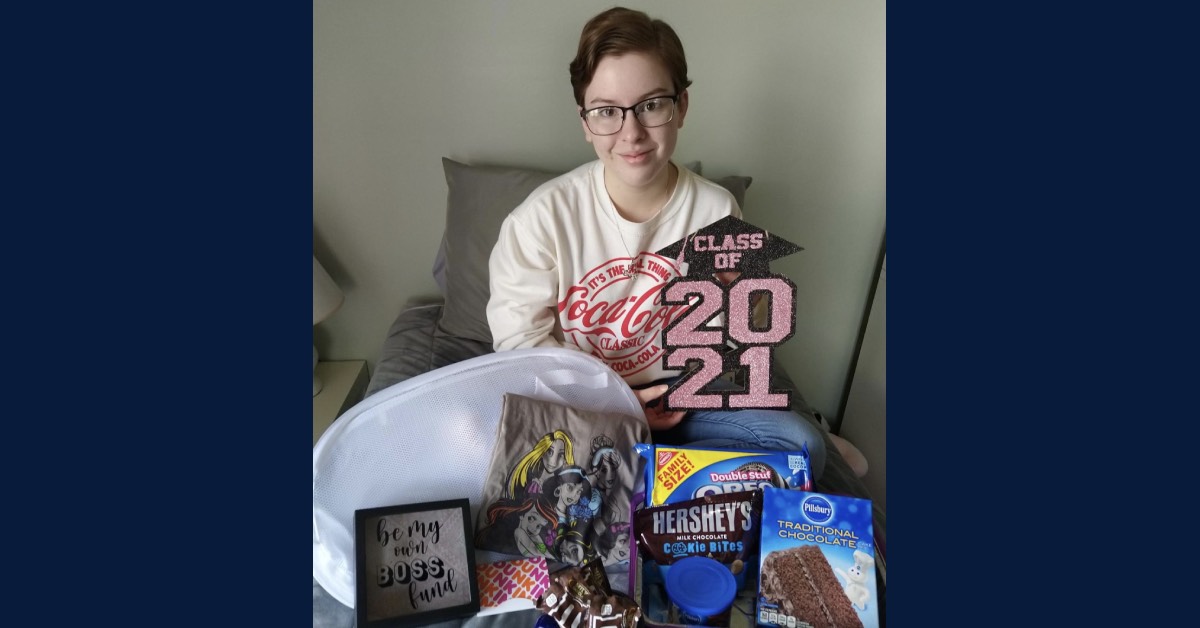 Last year due to COVID-19, parents of high school seniors across the Region created “Adopt a Senior” to give their kids some sense of normalcy during the lockdown. To participate in this program, parents gifted each senior something special. Considering the circumstances, this served as an exciting last hurrah before the students switched their tassels over.

Hebron High School parent Stephanie Daniels started the tradition for their class of 2020 and her daughter, Skyler Logan. She had seen the sadness that her daughter and her friends felt when their senior prom and in-person graduation were canceled, and thought this was a great opportunity to honor them.

“I created the Adopt a Senior tradition for Hebron seniors as a way to give them an extra boost while being stuck inside during the quarantine last spring,” said Daniels. “We, the parents, wanted them to know that we were here for them and to bring a little joy in spite of all the bad.”

After seeing how this helped her daughter and her friends, Daniels decided that she wanted to bring the tradition back in 2021. This time, she introduced the idea to Crown Point High School where her son, Treston Logan, is a member of the senior class.

“I just loved the idea of being able to shower another senior and their family with a gift to celebrate all their hard work and dedication,” Daniels said. “It is just such a great way to try to help fill the void of all the other normal senior traditions that these senior classes have missed.”

The matching process is pretty simple for each member of the class. They post a photo of themselves and what they plan to do after graduation, whether that is college, going straight into the workforce, or taking a break. They also share some of their favorite things like their most liked food, color, and places to shop.

The goal of the adoption is to have a parent or member of the community to donate to someone who is in their seniors' friend group, allowing them to form a relationship with their adoptee.

“We do not want any seniors left out because we know what it is like to have a prom and the perks that come with the big deal of being a senior. It would be great for those involved in the process to befriend a new senior who is outside their kids' regular friend group as well,” Daniels said.

By getting to know someone new, the tradition is allowing families that may not have known each other to form a new relationship and bond. These relationships will allow for the community as a whole to celebrate more graduates together since everyone will become more interconnected.

“The idea to bring the adoption process back to Crown Point is something that I thought about early this year,” said Daniels. “Having a senior again this year made me realize that it would be a good idea because there were so many unknowns about how he and his classmates would be celebrated.”

The celebration is on and thriving for Crown Point’s senior class! There have been over 250 seniors already adopted since the match and the posting process began in early April. However, there are still so many senior members out there in need of adoption.

“I know there have been a few parents who have posted for a friend's child because of them not having social media,” Daniels said. “This is great, but I am still trying to reach a lot more students so that everyone can be adopted and celebrated as they should be.”

Daniels, along with other parents, does not want financial constraints to hold a senior from being adopted. Though there are over 600 members in the Facebook group, many parents want to adopt and do not yet have a match.

“I would like to see more seniors join the group despite maybe not having the ability to adopt someone else’s senior. If they are interested in having their kid adopted, they should feel free to message me or the other administrator of the page,” said Daniels.

If you or anyone you may know in the group is interested in adopting a Crown Point senior, feel free to contact Stephanie Daniels or Monica Valente in the “Crown Point Adopt a Senior Class of 2021” Facebook group.

“I think the Adopt a Senior process will turn into a tradition for Crown Point,” said Daniels. “Regardless of having a global pandemic, I think it is just such an amazing way to celebrate these Bulldogs' accomplishments.”

The work done by Daniels and the other members of the Facebook group shows how a whole community can rally together and memorialize these kids’ time at Crown Point High School.