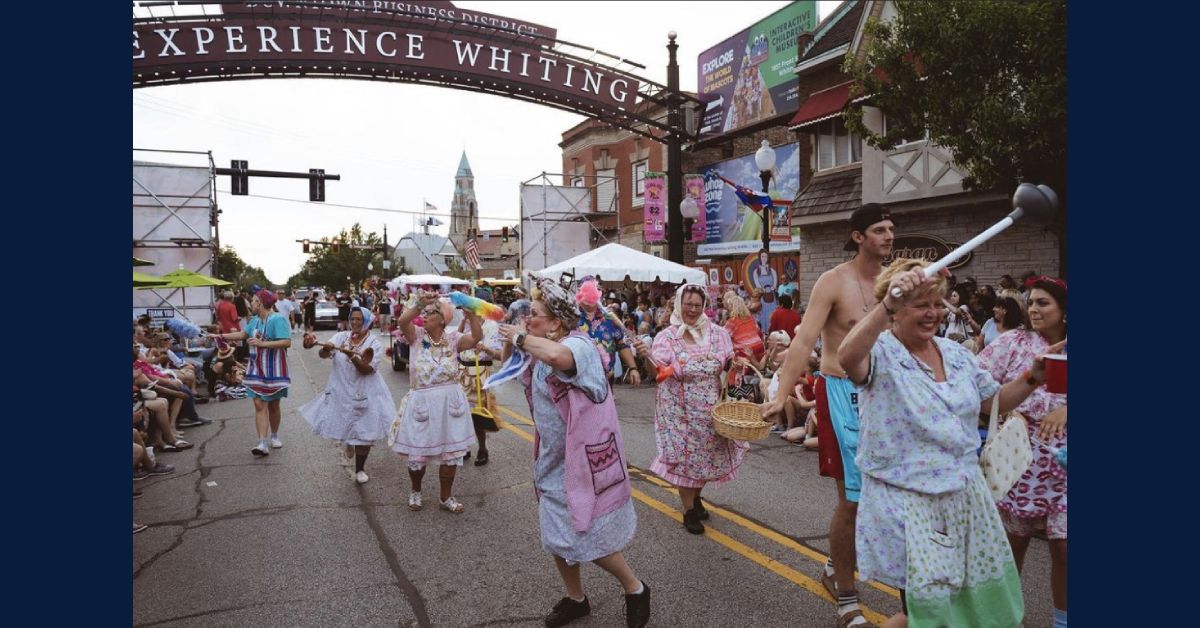 Whiting celebrated the Fourth of July by having its annual parade since before the COVID-19 pandemic. The parade featured many local Whiting groups, as well as other groups from surrounding towns such as Hammond and East Chicago.

The parade also had the Jesse White Tumbling Team, which put on an exciting performance that could be seen all the way down 119th Street and Indianapolis Boulevard.

The Mascot Hall of Fame was also included in the parade and represented one of Whiting’s newer, kid-friendly attractions to people from the area to go and visit.

With many floats and attractions going down the street, the parade was also able to have horses and vintage cars that rode throughout the event.

The City of Whiting prepares for its annual Pierogi Festival at the end of July. Being one of the biggest events of the town, over 250,000 people from around Indiana and neighboring states come to eat, listen to music, and see the parade.

Many Whiting residents will also participate in the parade, which features the staple Mr. and Mrs. Pierogi and King of the Pierogis. These are just a few of the many local celebrities that appear throughout the parade.

Many local stores and restaurants will set up outdoor stands and welcome people to the festival, as well as join in on the weekend of fun.

With Whiting having a large Polish population, the Pierogi festival allows many Whiting residents to celebrate their heritage and ancestors, and have so many people appreciate this time-honored tradition with them. With live music and food stands completely covering 119th Street, this festival is an attraction for all ages and allows people to come together to celebrate, eat, and bond over their heritage and traditions.

Kristi Greer is a current school board member of the School City of Whiting, and dedicates her time to helping out her community not just within the school district, but also by doing service to help her fellow Whiting residents.

Working in real estate, Greer prides herself in being there for her fellow peers and helping them find a city and home that is perfect for them, like Whiting is for her.

Greer is what an upstanding and exemplary Whiting resident should be, being involved with her former alma mater as well as supporting her fellow neighbors and attending so many Whiting events.

With Whiting’s famous Polish festival fast approaching, Greer shared how much the festival meant to her and her family.

“I enjoy Pierogi Fest. It is a time of year where I can celebrate my heritage and spend time with so many friends and family,” said Greer

Being Whiting’s most popular festival, Pierogi Fest fulfills the true meaning of ‘Experience Whiting’ to many residents like Greer.

“Having parent involvement within our school system helps set their child up for success and helping the parents understand they will ultimately help their child live a better life,” said Greer.

Being so close to Chicago, Ill., Greer appreciates Whiting's proximity to such a big city and admire the skyline from the Whihala Beach.

“I like the close proximity to Chicago. It gives Whiting a big city vibe with a small town feel. We are all family here, and having such a great residential area and amazing citizens makes it all the more special,” Greer said.

Raising her family in Whiting, Greer always has tried to spread the message of kindness to her family and many others in the area because it spreads the small town affection.

“I would like to continue to spread the gift of kindness throughout my community, this gift can go such a long way and does not expect anything in return,” said Greer.

With Whiting's range of options of restaurants and local businesses, one of Greer’s favorites is a local restaurant called Keith’s Bar & Grill.

“I love all the nice restaurants and stores, but at Keith’s, the food is outstanding. The staff makes you feel right at home, and the atmosphere just screams the message Whiting is meant to have,” Greer said.

Greer hopes more people will continue to experience Whiting the way she is able to and be able to see the welcoming and admirable qualities it has to offer to everyone.