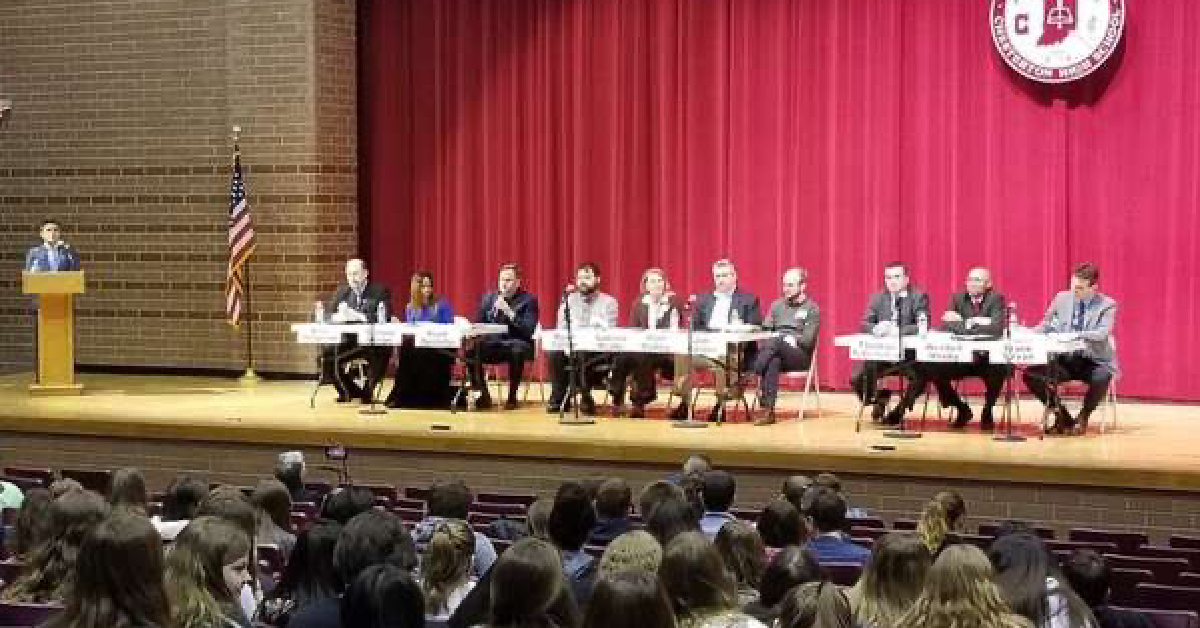 Chesterton High School held a forum on March 4 during seventh block for students to see the candidates running for election.

“The forum was an opportunity for seniors to hear about the domestic, national, and international policies that are important to candidates' platforms as they run for office,” said Sid Augustyn, senior founder and president of CHS Young Democat’s. “Not only did this help inform their votes, since many seniors will be voting in the upcoming election, but it helped to educate this powerful generation on the issues common to us all.”

Students were allowed to attend the events and hear the political beliefs from candidates of both parties.

“All Indiana congressional candidates of both Democrat and Republican parties were invited,” Augustyn said, “and we had 10 candidates come and talk to students.”

Students were allowed to submit questions for individual candidates and hear their statements.

“I believe it’s incredibly important for students to educate themselves on their vote,” Augustyn said. “There are so many issues that pertain to our home of district one, so it’s important we have a say on our own everyday lives.”

In other news, the CHS spring play auditions have been called off due to COVID-19, and English teacher and speech/debate coach Dakota McCoy said they are brainstorming other possibilities at the time.

“The spring play was going to be ‘The Election’ by Don Zolidis,” McCoy said. “The spring play is neither a musical nor a children's play, which is the biggest difference. Traditionally it has been a more dramatic piece of work, but the students really seem to enjoy doing comedies, so that's what we've been doing the last few years.”

The play was originally thought to go on before the break was extended through May 1.

“Some reached out to me asking if there were alternative plans, but as of now, there are not,” McCoy said. “Some students have asked about moving the production date into the summer. I like the idea, but even now it would be a stretch to assume when things will be normal again, so I don't want us getting in over our heads.”

There are many things that have been changed, rescheduled or canceled due to the COVID-19 virus, but students are working to keep their heads up for the days to come.

Senior Abbey Leffert finds her season of playing back of band for the Chesterton High School show choirs cut short due to the COVID-19 pandemic.

“Being in the band, it was a little different for me. It was bittersweet because we had a really fun season and we only had three more performances,” Leffert said. “Two of those got canceled. The day we found out was in the middle of a practice so we ended up sitting around in a group talking about what we liked about the season.”

Leffert finds herself as well as the rest of the Duneland school community on a break until May 1.

“It’s not really a good break. However it has made it easier on my family because we just closed on a house and we are trying to move,” Leffert said. “So the free time has helped with that.”

The students who have this time off are still doing e-learning work so they can graduate on time and progress in their academic journey.

It is important for all students, especially seniors, to keep a positive attitude during this trying time, although Leffert admits it can be a struggle.

“I just want to see my friends for the last few months,” Leffert said. “We are all together. Senior year was supposed to be a time for memories and sitting at home alone was not what I was thinking of.”

“Academic Super Bowl is a statewide contest held by The Indiana Association of School Principals. Students work in groups of three (four for interdisciplinary) to answer multiple-choice questions based on material supplied by a study guide,” Hewitt said. “Each year has a theme. This year's theme is The Roaring Twenties. The areas of competition are Math, Science, English, Fine Arts, Social Studies and Interdisciplinary (covering all the other topics).”

Hewitt along with the help of his well-rounded team of teachers, led the students in many well played rounds, with Hewitt himself coaching science since 1988.

“I am the academic competitions coordinator and one of the coaches,” Hewitt said. “The other coaches are Mr. Hackett, Mrs. Huwig, Mrs Jendrzejczyk.”

The next competition set to take place at Valpo was canceled due to the COVID-19 outbreak, but students are still holding on for their chance to compete again.

“Unfortunately, we have had to cancel the DAC meet and the Area meet in April is pending. We were able to compete at the countywide meet at PNW where we took two 1sts and a 2nd place,” Hewitt said. “Hopefully we can still have the Area meet in April. Unfortunately, many of our members are seniors and will not get to experience a full season. Hopefully, we will be able to recruit a lot of underclass students for next year to replace our seniors.”