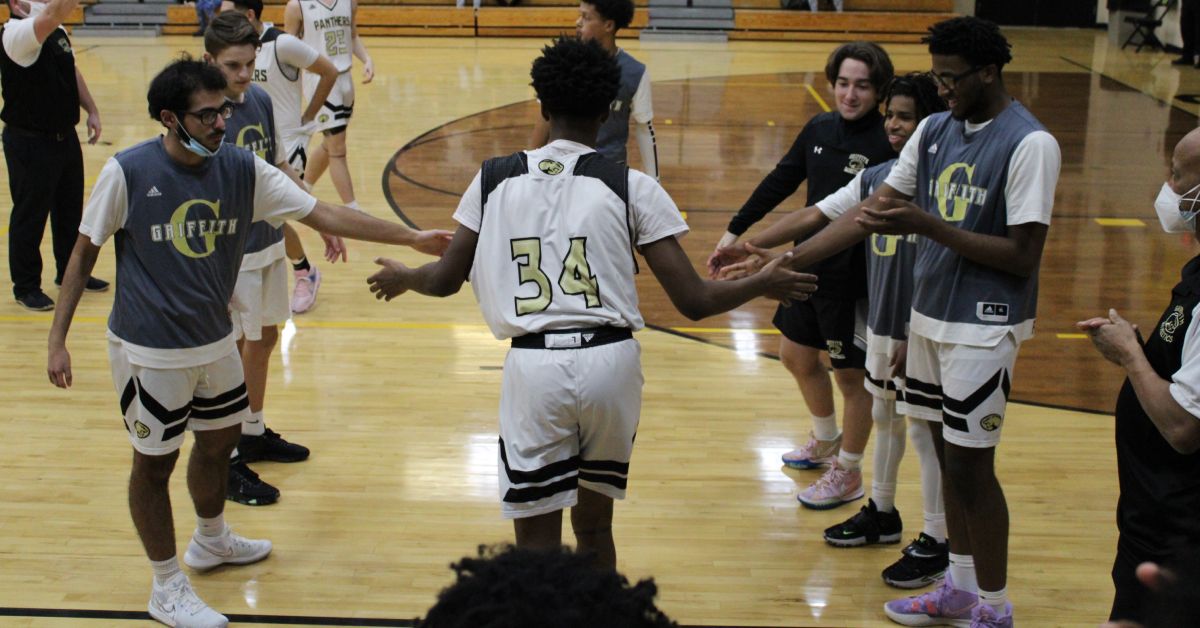 Griffith High School (GHS) has seen many administration changes in recent years. The most recent change, which happened in 2021, was the addition of Principal Greg Mikulich. Referred to around the building as Mr. Mik, he brought along a new reward method for the honor roll known as “Champions University.”

“Champions University allows for students on the A-B honor roll to get some time out of class as a reward for their hard work,” said Mikulich.

His original inspiration for this idea was based on the disciplinary issues around the school. Mikulich said the plan became a reward as a reason for a decrease in discipline issues.

Within the name “Champions University” is the word “champion,” a word that Mikulich uses a lot to describe the students, staff, and employees at GHS. He describes champions as someone who does the right thing when nobody is looking. He says this falls into all categories: grades, extracurriculars, etc.

Mikulich also has students and staff handing out “Champion Moments” throughout the day at GHS. A “champion moment” is a small recognition for a student/staff member who does something extraordinary in the school.

The champion Panther idea has affected the school in a very positive manner.

“The bottom line is that we want an environment that people, students and staff alike want to be in every day,” said Mikulich.

Mikulich says that the idea of a Champion Panther has made the feeling around GHS extremely positive and one that many want to be in.

With fall sports coming to a close, winter sports have begun their preparations for the upcoming season. The basketball team at GHS is a program with a great history but has seen struggles in the past few seasons. The group of guys that are currently in the program have been in the program for a very long time, coming from the middle school teams and many years of JV or even varsity experience. The group is very young, as many of the core contributors to the team are sophomores, juniors, and freshmen.

Jakhari Mackey is one key piece of the team. He had averages of 5.6 points-per-game and 4.1 rebounds-per-game last season and is poised for a breakout year.

Listed as a captain by Coach Joshua Belloumini, Mackey has been at every conditioning held since the beginning of the season.

“Conditioning is definitely harder than last year,” said Mackey. “Not only because we work out our legs before we start running, but also because we need to be in shape to play a full four quarters of varsity basketball.”

Mackey has also seen a change in roles on the team going from a freshman with little influence to a captain.

“As a team captain, I make sure to push those who don’t feel the need to go hard in practice so that they can prove to Coach that they are worthy to be in this program,” said Mackey.

With this new generation of talent, Mackey also says this year has a different vibe than previous seasons.

“I feel we are way better and improved compared to last year due to the increase of chemistry with each other,” said Mackey. “We play at the Y and outside of school, and we know how everyone can contribute on the court. This year, we do a lot more uplifting after mistakes, and each player pushes each other to make the team stronger and better. We work as a team, and everything on the court is about the effort each person puts into it.”

Another young leader within this group is Antoine “A.J” Hatch. He has been the team's point guard (PG) through his freshman year and is the starting PG this year. With the core group of Class of 2025 having its first varsity experience last year, the season was more of a learning curve for them.

“Now we know how the game is played at the varsity level,” said Hatch. “With our record last year, we knew we had some improving to do, and we worked hard everyday to never let last year's record happen again.”

Griffith Boys Basketball opens its season December 3 at home against Lake Station, which is hopefully the beginning of a great season and a new era of Griffith Basketball.

Shannon Scheidel is a teacher and coach of cross country at GHS and has been tenured for 16 years.

On one side of her career, Scheidel is a teacher of many classes which help students learn about life applicable ideas. She teaches Nutrition and Wellness, Child Development, Life Skills, Education Professions ll, Principles of Teaching, and Human and Social Services ll. Scheidel says her favorite part of teaching is her students.

“I love that they not only learn from me, but I learn just as much from them,” Scheidel said.

She also loves the classes she teaches.

“I enjoy watching my students learn about life and obtaining useful skills they can use now and for the rest of their lives,” she said.

The other side of Scheidel’s career is coaching cross country. Scheidel hadn’t always planned on coaching, but she was inspired by a previous coach of hers when she ran cross for GHS.

“I had an amazing coach in high school by the name of Dan Govert. He made me realize that I wanted to continue with cross country, but as a coach,” said Scheidel. “Govert still supports Griffith Cross Country and inspires me everyday to be as hard working and motivating as him.”

Scheidel says her favorite part of coaching is seeing her athletes succeed.

“Whether it’s running their best race of the season, making it far in the postseason, overcoming injury, or just having a great practice. Competitive running is a challenging sport both mentally and physically, and I ask a lot of my athletes, but they show up everyday. They not only become better athletes, but they make me a better person and better coach as well,” said Scheidel.

Scheidel is beyond grateful for GHS

“I couldn’t ask for a better sport and teams to coach over the last 16 years. I am truly blessed,” she said.

Elijah Neal is a senior at GHS, and he is one of the most involved and influential students at the school. He is in the top third of his graduating class. Neal has been in the Griffith Theatre Company (GTC) for the entirety of high school, acting in some plays and directing others. He also participated in competitive choir for his entire high school career. Neal is the president of Class Council, and has been in this for three years. Neal is also the vice president of the National Honor Society after joining in his upperclassmen years. Lastly, Neal has been in Book Club, Students Against Destructive Decisions, Student Council, and Best Buddies for one year.

After high school, Neal plans to attend a nationally ranked music school for music performance and education and hopes to one day be either a music teacher or a professional performer.

Neal puts a lot of time and effort into his craft.

“Altogether, drama and choir take up most of my time out of all my clubs,” said Neal. “They’re both things I’m extremely passionate about, so I tend to put my all into them.”

Neal has competed in the Indiana State School Music Association (ISSMA) since middle school and says he has grown so much as a performer within ISSMA. He has won six gold medals and one silver medal throughout his time in ISSMA and hopes to do a gold sweep his senior year.

Along with choir, Neal also splits his efforts into drama. Neal credits the GTC for the building of his person and character.

“Theatre gave me a safe space to express myself, and I am forever grateful,” said Neal. ”Whether I’m on stage performing or directing a show, I am always reminded that theatre is the space that shaped, and continues to shape, who I am as a human being. Being in such a good space gives me a sense of purpose, and I don’t know if I would’ve turned out the same without it.”

Elijah Neal is a great influence on GHS and GTC, and his activity throughout the school will be felt for much longer than he is in high school.