New Head Football Coach, Phil Mason, is Trailblazing through Tradition
With their first win against Chesterton at Chesterton since 1995 and a 3-1 season, the 2016 MCHS Wolves football team is off to an incredible start, all thanks to their new head coach Phil Mason.

Mason, a former head coach at Andrean, hopes to accomplish goals similar to the ones he achieved at his previous schools. During his time at Andrean, Mason led his team to an Indiana State Championship in 2013 and a State Runner-Up in 2014. Under his guidance, Andrean also made it to multiple championships at the conference, sectional, regional, and semi-state levels. This year, he is specifically focused on leading the Wolves to a sectional championship.

“In my experience, once you win the sectional, anything can happen,” said Mason from the MCHS football war room.

The war room itself is a symbol of Mason’s dedication to the job. Upon entering, one’s eyes are immediately drawn to the whiteboards scribbled with notes for plays that nearly cover one of the walls. Developing plays is something that is very familiar to Mason. In fact, he remembers “being one of those kids who was always diagramming plays” even when he was twelve years old. His passion for football continued to grow when he attended Illinois State University. Some of his college coaches were the very people who motivated him to dedicate his life to coaching.

From these coaches, Mason learned the importance of tradition. Andrean had a very tradition-enriched program, according to Mason, and he hopes to instill some new traditions at MCHS. With the sport being an American tradition itself, Mason knows that he needs to motivate his student athletes to “buy into” this ideology themselves. To do this, Mason plans on sticking to his tried-and-true “old-school methodology.”

Through this coaching style, Mason has seen his players begin to grow into his philosophy even this early in the season. Cooperation between the coach and his players is key, and Mason is developing that give-and-take with the Wolves.

“Watching them develop into the type of team who buys into the culture and the work ethic so much has been my favorite part of this season,” Mason stated.

“[Coach Mason] has helped me grow from a maturity standpoint as a leader, to just focus, and to have fun doing what I have loved doing my entire life,” said McCullough.

Mason also acknowledged junior Braden Fiske and his adaptability when it came to his move from defense to offense. Similarly to McCollough, Fiske believes that Mason played a big role in his development as an athlete.

“[Coach Mason] has helped me in many ways like understanding my position and knowing what I am doing on the field. It is such a fast-paced game, and he has prepared me week-in and week-out for it,” stated Fiske.

When he is not on the field with his players, Mason can be found teaching MCHS’s strength training course. At all of his previous schools, Mason taught either PE or special education courses. At the moment, he is focused on getting his strength training students “into the swing of things,” so they can develop just as much as his players have. He also plans on focusing on anatomy and physiology this semester.

Whether he is setting and achieving goals with the Wolf Pack or teaching his strength training students, Phil Mason is playing a large role in helping MCAS go from good to great by building a foundation of new traditions. 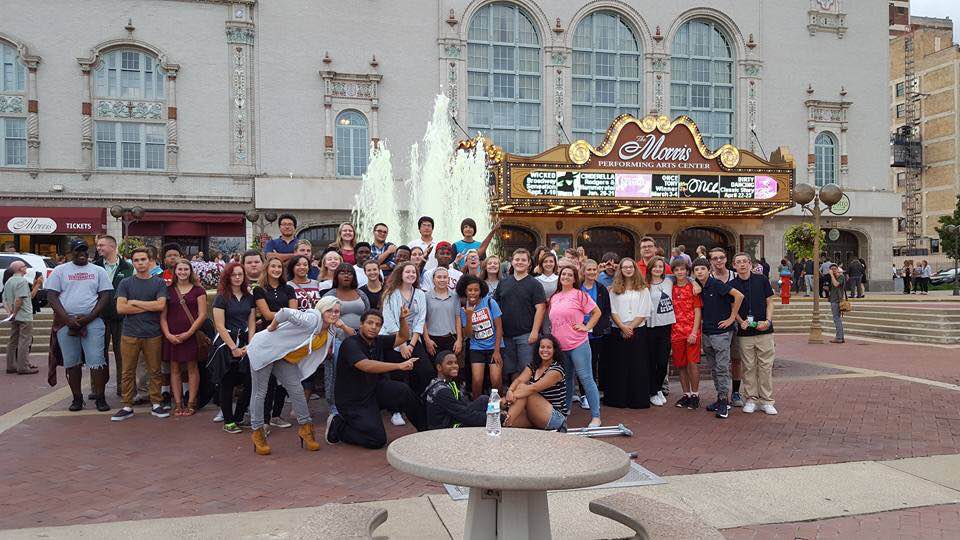 From the beginning of the season, band director Richard Merrick knew that he wanted his band to perform numbers from Wicked because the Wolf Pack Marching Band has never done it before.

“I have always liked the music from that show,” said Merrick, “and I also knew that the band had never done it before because the old band director was never a fan of the show.”

When the band’s color guard director Trisha Foltz found “Ozmosis,” which includes songs from The Wizard of Oz, The Wiz, and Wicked, there was no doubt in Merrick’s mind that this was the perfect set for the 2016-2017 season.

Senior color guard captain Hannah Tubbs says, “Performing ‘Defying Gravity’ is such a powerful moment in the show, and most of the hardest choreography is in that song.”

With the band being so invested in this year’s set, the booster club decided to seek out opportunities for the students to delve deeper into the land of Oz. This search led them to the Morris Performing Arts Center, which is currently hosting Wicked. Tickets were originally around fifty dollars per student, so the odds of the band experiencing the tenth longest running musical on Broadway were slim. Luckily, one of the booster club parents got in contact with someone in admissions at the Morris, and the band was able to go for free on September eighth.

This field trip was meant to inspire the band to always be the best they can be. Merrick thought this opportunity to witness musical theatre in its purest form was important because “it’s played by pros, which is what [the band] is striving to be.”

It was also very sentimental to most of the band members. Over the summer, the band lost freshman, Travis McDonald, to the waves of Lake Michigan, and this was very emotionally straining. Attending the musical provided solace and closure to many of the band members.

According to senior and section leader, Destiny Harvel, “It was really important for us to hear the song “For Good” live and from a professional performance. The line ‘Because I knew you, I have been changed for good,’ really meant alot to all of us with Travis passing.”

Now that the band is back from their very meaningful trip to Oz, they will be performing “Ozmosis” for the halftime show at every MCHS home football game until the end of the season.