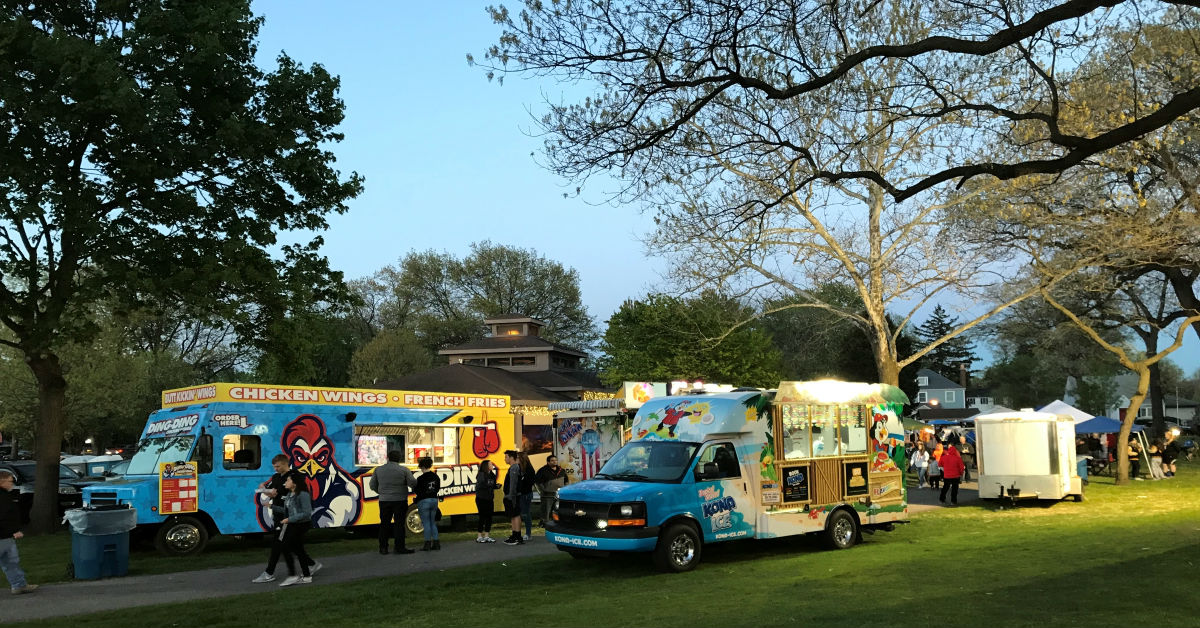 Griffith’s Central Market made its long awaited return on May 10 in Central Park. Community members gathered to enjoy live music, vendors, and community kinship. Local businesses, artisans, and food trucks of all varieties rented spaces for $20 each Friday in hopes of increasing their outreach. Local bands and performers signed up to perform in the pavilion. Central Market is considered a summer staple for Griffith and occurs every Friday from 4 p.m. to 10 p.m.

“It’s been going on for six years,” said Griffith resident Jason O’Donald, a regular visitor to the market. “It keeps growing every year, more vendors and music. I basically come to hear live music and hang out. Having some beverages is nice, too.”

Long time Griffith resident Kathy Ruesken started the market in 2013, after Downtown Griffith was remodeled. The park was hardly used, and Ruesken wanted something to bring the community together and reflect Griffith. She posed the idea of having a weekly market with food, drinks, and music to the Town Council, which heartily agreed and even allowed a variance to serve alcohol. Ruesken ran the market with her husband and a few town volunteers, including late councilwoman Patricia Schaadt, until 2018, when she turned over control to the town. By then, Central Market had grown in a beloved event all over Lake County, reviewed as one of the best weekly markets in the region.

“It brings our community together,” O’Donald said. “Griffith has grown a lot, and it’s nice that we come together every Friday. Local businesses thrive on it. It spreads the word and positive energy. I’ve been coming every year and week and still am.”

The pavilion has always been the heart of Central Park and is the hot spot of the market. Picnic tables, both under a roof and outside in the sprawling green yard, are perfect families and friends eating together. Part of the pavilion is a beer garden, which adults over the age of 21 can access with a purchased ticket to buy beer or wine.

When the market began in 2013, black mesh fencing was installed to line the perimeter of the eating area, and panels were placed on the sides to provide heat and comfort, especially on chilly days. On the stage inside the pavilion, two acts perform: the opening act from 5-6:30 p.m. and the main act from 7-10 p.m. Local musicians are given a chance for their live talent to be projected all over the park. Guitarists, bands, and soul singers have all graced Griffith’s markets and received positive feedback from listeners. On May 10, the band Hot Sauce performed the opening act, followed by the locally named band Caught on Cline for the main act.

Vendors line the paved trail that runs past the pavilion. Food trucks and stalls from local businesses include Grindhouse Cafe and, for the first time this year, Ju Ju’s Ice Cream.

“This is our first time at the market,” said Maria Villarruel of Ju Ju’s Ice Cream, a local business that sells homemade ice cream and popsicles. “It’s been an adventure—you get to meet a lot of people, grow business. We try to overstock so we don’t run out. This business’s main goal is to satisfy customers who enjoy the product we make.”

Other extremely popular food trucks include bubble tea from Lulu’s Licks, Puerto Rican fare from De Portable Rican, fried cheese from Sizzle Box, pizza from South Shore Ovenworks wood fired pizza, and pretzels kneaded and baked on the spot at Ben’s Soft Pretzels. Most of them are market veterans who appear at multiple farmer’s markets and town festivals across the Region, including Griffith’s Rock ’N’ Rail Festival in late summer.

Artisans also hawk homemade crafts, such as soaps, paper beads, handmade jewelry, and tie dye clothes. Karen Somerton of Winfield runs her own business, Lucky Lotto Jewelry, in which she crafts and sells jewelry made out of beads from winning lottery scratch offs. Somerton has a day job at a gas station, where she got the inspiration to make something unique and beautiful from lucky tickets. She said that she plans to focus solely on her artwork at the first opportunity. Past the pavilion, activity is set up for the children, like bounce houses or a barrel train driven by a tractor around the park. The recently-remodeled playground is continuously bustling with little ones.

“They have a huge structure with a bunch of slides coming out of it, a rock climbing wall, a rope climbing [playground], and ziplines,” said Griffith High School sophomore Elizabeth Lapointe. Lapointe, her parents, and her younger sister Sophie Lapointe go to the market to eat and relax before walking home. “Sophie always runs to the playground. Having something for kids to do is important because the parents can talk and eat together while the kids can run and play.”

People of all ages have a chance to meet at the market. Griffith High School freshman Katlyn Noojin frequents the event every week with her friends. “It makes me feel like a kid,” she said. “Innocent, fun. We mainly buy food and walk around. And we always get bubble tea.”

Central Market will continue from May to September 13, with exception for special events.