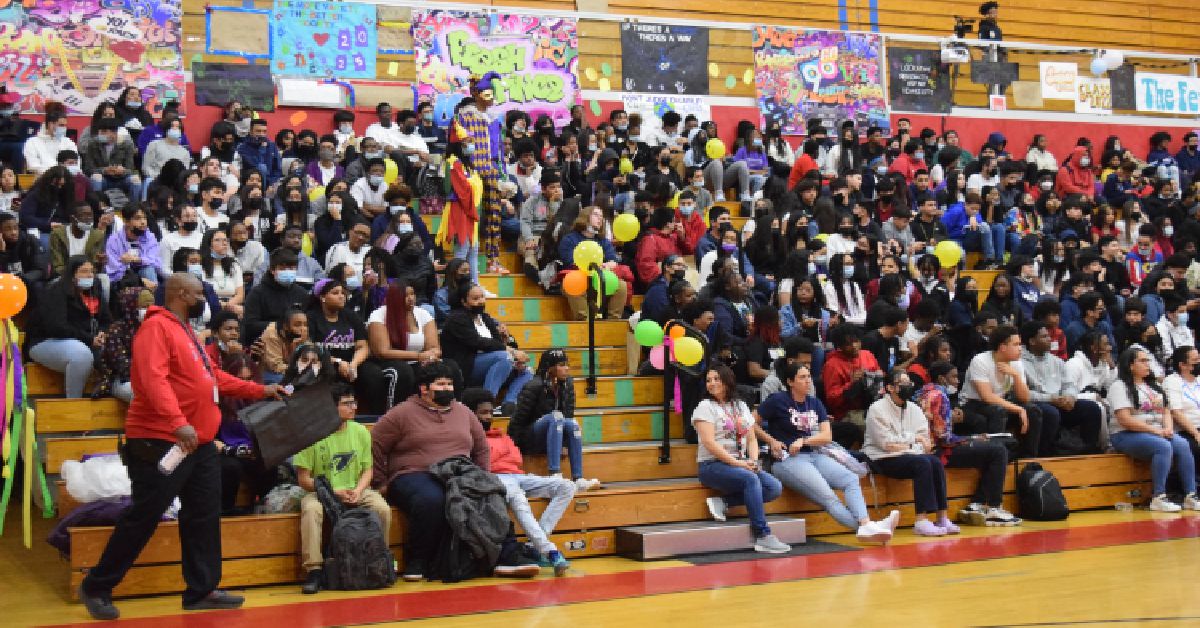 East Chicago Central High School (ECCHS) has had an exciting week. On April 4, early registration for returning students in the coming year of 2022-23 opened up. Returning students had the opportunity to register early and make sure everything is in order before the start of the summer.

April 4 also marked the first day of a mask-optional protocol. Students now have the option to remove or wear a mask according to personal preference.

On April 7, senior cap and gown pictures were taken. This was a good day for seniors at ECCHS, and was the start of many new memories to come as the end of the school year is coming to a close.

On April 8, ECCHS had an amazing pep rally about inclusion, awareness of bullying and diversity, along with unified sports. The pep rally was eventful. There was a guest speaker, three rounds of tug of war between each class, and a basketball game for the ECCHS unified team.

The pep rally was a fun-filled event that was not only enjoyable, but impactful in so many ways. The importance of bringing awareness to bullying and diversity is not something ECCHS takes lightly. The event was valued like no other.

Coming up on April 15 in light of Good Friday, there will be no school. This is very exciting news considering that there will be a three day weekend, and is especially exciting after a week of hard work with everyone's classes.

Coming up, there will be an easter egg hunt that ECCHS will be doing for their students and staff. It will be a fun event for the school since Easter is right around the corner.

On April 18, ECCHS will be having a Career and Technical Education (CTE) parent night. At this event, they will be talking about the CTE program and what the program offers, along with the career exploration program that is with the Boys and Girls Club.

These are all very good opportunities for students who want to join CTE classes for any future career paths that students want to take in the upcoming school years.

On April 20, the Foundations of East Chicago will be having a scholarship workshop for students and their parents. This event will take place at ECCHS, and will start at 6 p.m.

Cynthia Wilson was the interim athletic director of the unified sports program at ECCHS. Her last day with ECCHS was April 8. She was a dedicated and hardworking athletic director at ECCHS, and everyone loved and supported her.

Wilson has spent years serving the athletic department, and one thing that Wilson will never stop being is an ECCHS cardinal. Throughout her time with the school, she made many bonds with students and staff.

“I will miss my kids the most! I will cherish the friendships and the memories that I have created throughout the years with students as well as staff.” said Wilson.

Wilson appreciates the impressive character that students have shown her over the years.

“What stood out to me the most was the perseverance, respect and willingness to help that I have received from our students," said Wilson.

All in all, Wilson has nothing but love for ECCHS, and will be greatly missed. Students and staff will continue to support her in her journey with the next position that she is taking.

Senior Dulce Guerrero, known as Mayleen Guerrero, is a very hard working student. She is a part of many things at ECCHS, and is seen as a very accomplished young person.

Some of her teachers describe her as a very talented individual who tries to achieve the greatest things in life. It seems nothing is going to stop her.

Guerrero was recently accepted into Johns Hopkins University in Baltimore, Maryland and was offered a full-ride scholarship.

Congratulations to Mayleen Guerrero on this amazing accomplishment!