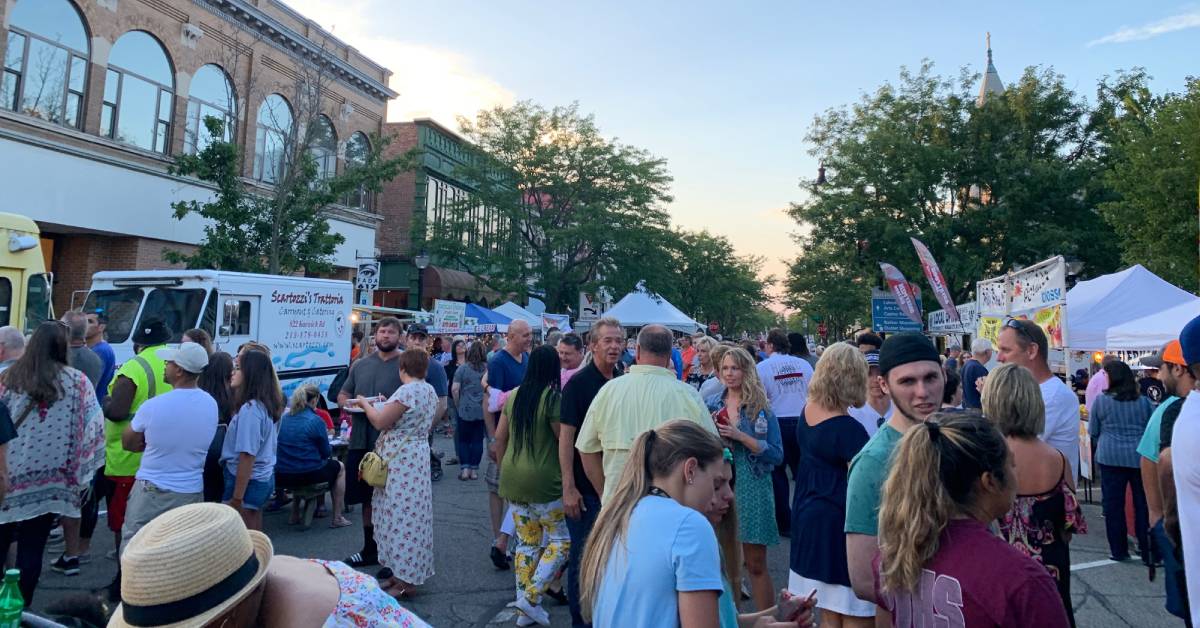 Twenty vendors with set ups ranging from folding tables, food trucks, and a minibus arrived at Michigan City’s Uptown Franklin Street early in the afternoon. Each was checked in, parked, and plugged into power boxes. Franklin Street hummed to life as bosses and employees alike began to prepare for the long weekend ahead.

Taste of Michigan City left the streets flooded with locals and out-of-towners. They all came for three simple reasons: food, fun, and community. Abby May, president of Michigan City Mainstreet Association, spent half a year bent over plans and papers with an eleven-person nonprofit board in preparation for this night. She said the best part of leading the Mainstreet Association is being part of a team full of expertise and passion.

The buildup was the most intensive aspect -- vendors, employees, and presidents agree. May said that as soon as Shelf Ice Brewfest ends in February, all work gears toward Taste in August. May, her board, and her committee, were not the only ones putting in the hours months before the event. Well in advance, twenty vendors with very diverse menus came together from all over the Michigan City area for a vendor meeting. This was when they decided which plot was theirs, how much power they’d need, which items they would offer (in some cases, to avoid clashing with other vendors’ similar cuisine), and how best to optimize everyone’s sales.

“One of the coolest parts,” May says, is the vendors coming together despite their different backgrounds.

“It’s a perfect example of how collaborative Michigan City really is: everyone helps each other,” she said.

An interesting vendor present was a business based in Westville by the name of Olga’s Place Pizzeria and Restaurant. Three women tended to pierogies on a grill as they talked about how they had been in Westville for 13 years, but this was their first year at the Taste of Michigan City.

The youngest of the women, a high schooler, answered questions while plating food for the line, which extended out into the growing crowd on Franklin Street. The hardest aspect of running the stand was what stood before them the night before: preparing all the food. She had sore fingers from hand-making each pierogi being served, all week long. She said the best part, far out-weighing any possible con, was the people, which earned a cheer from their growing line.

In contrast to Olga’s was Albano’s Villa, another pizza place. Owner, Jim Albano, said they have been to Taste of Michigan City every year but the first. He agreed that the hardest part is setting up and tearing down, but once they are there, it’s a fun summer event to be part of. According to him, his line is split pretty equally between locals and summer residents from out of town, but every year he always has people return to his stand that have come the year before, raving about the food. He said that Taste of Michigan City gives the community a great night to come together, have fun, and eat great food.

The Great Lakes Grand Prix began Saturday morning and continued through to Sunday, August 4th. Saturday evening, along with Taste of Michigan City, was the Boat Parade and Block Party on Franklin Street. Here, the racers from the Prix took their speed boats out of the water and onto wheels. They parade down Franklin Street, where sidewalks are packed with onlookers in folding chairs waiting to see the great boats and catch some candy. The majority of racers came from other places to race, such as Alaska and, even further, Dubai. Sunday morning, after the Boat Parade and Block Party, people packed onto Washington Beach for the second day of races. After the festivities wrapped up on Sunday afternoon, Franklin Street was cleaned and returned to its normal state.

The next event coming up in Michigan City is the Lubeznik Arts Festival taking place on Saturday, August 17th, and Sunday, August 18th, at the Lubeznik Center for the Arts. The Arts Festival will display a variety of different fine art forms and craft for sale, as well as food and engaging family activities. General admission will be $5 a day, and all profit is invested right back into the Michigan City community.

Marquette Catholic High School students are also returning to class this month on the 19th.